So, here we are again. Another Placebo show this year (we already went to the ace charity show they did in Leeds last month), and another diverse setlist spanning the band’s history. It’s clear to everyone in attendance tonight, and to those who have followed of late (well, anytime over the last decade), Placebo have grown and developed so much over the years, and yet, they still sound (and look) good. Working through old and new classics alike from ‘B3’ to ‘Teenage Angst’, we get the punky raw dudes of the 90s, alongside the shiny, polished later works of the “experienced gentleman glamsters” including ‘Too Many Friends’ (a now much celebrated attack on social networking and media). 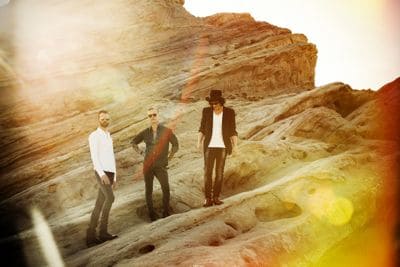 It is after all the diversity in provocative lyrical content and catchy hooks that made (and continue to make) the band’s material so darn addictive. Again, they’ve gone from snotty glam-cross-gender punks to rock icons over 20 plus years and it’s great to watch. Highlights of tonight’s set are the dark and seductive ‘Space Monkey’ and the anthemic ‘Every You Every Me’.

Throughout tonight, Placebo maintain the glamour that has always enveloped them, but they strike with a certain grace that is much more Bowie than anything else. Placebo have incredibly strong material, and they are now world-beaters and stadium fillers, like David they have crafted everything over the last decade (some of the finest new pop-rock cuts tonight include ‘Rob The Bank’ and ‘Speak In Tongues’), with a decadence and passion that has transcended numerous movements and genres, from Britpop, goth rock and simple, plain indie, Placebo have easily built a great legacy that has been expanded with a proud performance here tonight. Long live the uncrowned princes of modern UK rock sounds.