Epic. That’s a word that gets chucked around a lot we know, especially in this line of work (reviewing epic gigs), but that’s what we get with Rammstein; we’ve all heard the hype that surrounds the German industrial metal band’s live showcase, and it is quite honestly everything of that, and so much more. 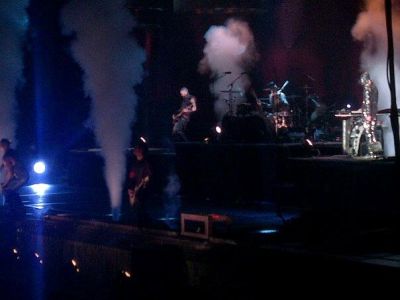 The complete experience from this weird and wonderful six-piece has to be seen just to be believed. Now with that firmly in mind, we really, reeeaally wanted you to see this gig, or at least some of it, and we had a photopass (kindly provided by AMPublicity [see below for actual evidence]) but erm, we broke our camera… in the photopit… before the gig. So… yeah. Have no fear though, I (Dom) took some “rough” images via mobile (oh, the wonders of our digital age), and these will be used in a clever manner to break up text… enjoy! Anyway, on with the show, as they say in space… and down here, too. Pretentious goth bands, showy glam rockers and angsty EBM botherers take note, this is how it’s bloomin’ well done, yeah?

As the lights dim and the world goes dark inside of the rammed MEN, a ridiculously massive walkway bridge comes down from the roof creating a path from the stage to a small central space (by the mixing desk). Then, from the side of the building, a black-clad procession (the band) enters the space, led by Ollie Riedel holding a flame (fire is going to feature in this one a lot, FYI) and accompanied by haunting drums. The group slowly moves through the crowd (accompanied by thunderous cheers) and make their way to that central space. For a little while, the band stands, creating the ultimate sense of mystique, heads down, before the central space rises to the bridge and then the band make the walk (in time with the beat) to the stage and assume their positions. Rather fittingly, following the deep, brooding drums, a “stacked” Till Lindemann counts to ten signifying their launch into the mammoth track that is ‘Sonne’ – there’s no usual “standout tune” here by the way, this could have been done at the encore and it would have received the same ovation; Rammstein are truly loved. Obviously. 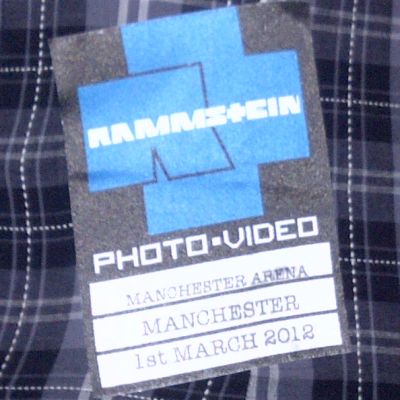 Worth mentioning immediately (and props to the crew behind the band) is the sound which is of an absolutely incredible standard, and more immediately the stage show, which (whatever you are into) you will never experience anything else like, as long as you live in this world; it’s almost alive.. well, at times it actually is with all the fire… have we mentioned, there’s lots of fire! Huge flames and pyrotechnics launch from the very front of the stage, to the back; as a result the heat we experience at the front is truly intense, but it adds to the overall atmosphere and impact of the show.

This tour’s set-list thankfully supports last year’s career-spanning ‘Made In Germany’ record, so it’s a pretty ace career-spanning affair; long-time fans get to re-live their favourite tunes and new fans get to experiences the best of Rammstein’s anthemic catalogue. Each song is a “beast” that offers up a new and innovative effect to evolve the stage show – it’s almost frightening when everything goes off at once… but then, I am a wuss, and much like with Alice Cooper, that’s part of the fun. ‘Asche Zu Asche’ sees burning microphone stands for guitarists Richard Kruspe and co, via spark showers for the kink-metal anthem ‘Mein Teil’ and delightfully dangerous flame cannons for the mosh-ready ‘Feuer Frei!’, to (most iconically) flaming wings perched on the back of Till during ‘Engel’. Particularly entertaining throughout, is the on-stage banter that occurs between Lindemann and the hilarious treadmill-conquering (… he walks on a treadmill while performing) keyboardist Christian “Flake” Lorenz (they fight a fair bit during the set). Indeed, one great highlight in terms of the show saw a large cauldron wheeled out from a secret compartment underneath stage (yep, these guys have everything but the kitchen sink at their disposal) which contained Flake playing keys ever enthusiastically, until Till tries to… well, cook him using a flame-thrower (the band use these things like their favourite toys… honestly). Rather humorously, when this first attempt fails, an even bigger thrower is used until the whole freakin’ cauldron explodes!

Following that, and in a move that is now synonymous with Rammstein shows, Flake is almost delivered (as a present from his bandmates to the crowd), in a rubber (ouch) dingy. Again, you have to see it, in order to full appreciate just how cool this is. Brilliant stuff. Another surreal moment follows next, as Richard Kruspe appears back in that central space we mentioned playing synths and creating what can only be termed as a “phat” beat as part of what seems like an interlude; the bridge descends once again, and shackled together the band move from the stage back over on hands and knees for a few songs; despite the massive setting, it’s here that the show feels most intimate. That is until ‘Buck Dich’ is performed and Lindemann produces a massive (fake) penis from his trousers to then climax all over the crowd (with “jizz” that is not actual “jizz”, we hope). It had to be done, and it will, without question, stay in our collective memory forever… the band also spank each other, which is fun to watch… whether you are into that… or not. Once that’s all done, and everyone’s entirely worn out, the unit returns to the stage and exits before returning for a first encore. 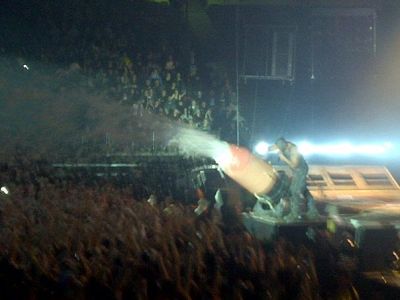 Here, we get more classic tracks including ‘Ich Will’, ‘Mein Herz Brennt’ and ‘Amerika’. In the second encore, we get a little more than that. Along with the aforementioned ballad that is ‘Engel’ we receive ‘Pussy’ (no pun intended) during which Till mounts a large building mixer, which, we should probably mention is designed like a penis… from which he squirts foam over the whole crowd (nobody is missed out… how nice). During the final moments of this night, like ultimate professionals, the band bows before saying goodnight and thank you. Cheers lads, you’ve done good.

In conclusion, I’ve not seen Rammstein before, but this two hour set has been one of, if not the most memorable and different gig I have ever been to. The music is hard, heavy and wonderfully nostalgic but the stage show is out of this world. See this band live before you die, I beg you. As Ginger Wildheart (of The Wildhearts) said to me before leaving the arena tonight, “You just can’t beat that, can you?”