We sent Jerel Stephen Lane to New York to catch Rammstein and then give us his personal account of their live show – here’s what he thought (with some lovely photos added in). Beware the massive foamy sexual organ, Jerel… beware. 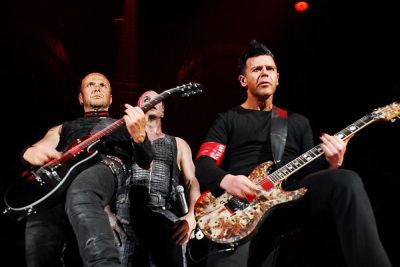 I’ve watched the DVDs (many times). I’ve seen the YouTube videos. I’ve worn out the live CDs. However none of these bits of recorded digital data can compare to the experience of seeing Rammstein live and in the flesh. With more explosions, pyrotechnics, and special effects than a Michael Bay film (bad reference? Forgive me, I’m from the States…), industrial’s favourite German sextet bring their blistering set of ‘Greatest Hits: 1995-2011’ to New York City’s Nassau Coliseum. While the arena is not a sell-out, the energy from both performers and audience alike more than makes up for whatever lack of patronage. The band is tight, just as you’d expect from a group who is coming up on 20 years (with all original members, no less!) together.

The crowd here is certainly mixed! It is great to see; there are goths, rockers, hipsters and tough guys all present; there are the young and the old; Germans and Russians and even a whole group of people from Venezuela who ask me to take a picture of them after the show with their Rammstein branded Venezuelan flag. It is really awesome to see so much diversity.

Anyway, on to the show… 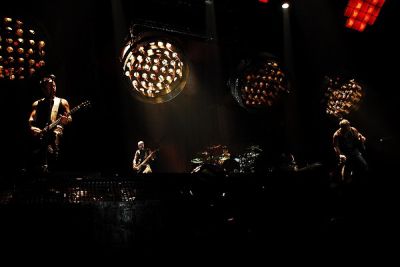 The lights go down after opener DJ Joe Letz (drummer of Atlanta’s Combichrist), and the eerie music begins. A silent hush falls over the audience. The mood could be described as sombre and tense as the group, led by bass-man Oliver Riedel who (while carrying a large torch) leads the rest of the flag-wielding members through the audience and towards a small lit up box-shaped object in the centre of the arena.

As the band climbs up, a bridge descends from the rafters as the small stage raises. When stage meets bridge, the group makes its way (slowly) across the bridge and onto the main stage. After the bridge makes its return to the sky, the band rips into their first song of the night – ‘Sonne’, and the audience has gone from tense anticipation to all out release.

After ‘Sonne’, an old favorite in ‘Wollt Ihr Das Bett In Flammen Sehen’ is played, with towering walls of flame to accompany every instance of the bellowing “Rammstein!” chorus. This leads into a four-song set of instant crowd pleasers – ‘Keine Lust’, ‘Sehnsucht’, ‘Asche Zu Asche’ (a live favourite of mine!), and ‘Feuer Frei!’. These songs have their fair share of the pyro – flaming mic stands, showers of sparks, and fire-breathing mechanisms all make an appearance during this set. Also worth noting here is the on-stage performance of the band itself – keyboardist Christian “Flake” Lorenz is apparently working on his cardio by walking on a treadmill while guitarist Paul Landers is really into his pendulum-bouncing microphone stand, and singer Till Lindemann is simply entranced throughout.

‘Mein Teil’ is up next, and features everyone’s favourite (boiling) keyboardist (in a pot), with one angry flame-throwing lead singer. It’s quite the spectacle and the heat from the flames can be felt throughout the arena. Following crowd favourite performances (and of course, more eyebrow singing pyrotechnics) of ‘Du Riechst So Gut’, ‘Links 2-3-4’, and ‘Du Hast’, we are treated to 2009’s ‘Haifisch’. In this song we get to see what has become a Rammstein live staple – Lorenz getting in a rubber boat and making his way across the sea of humanity that are lucky enough to secure themselves general admission floor seats. This is just one of those things that is cool on paper, cool on DVD, but way cooler in person. 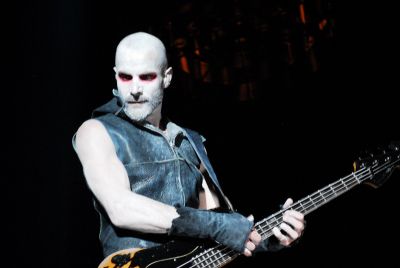 However, as this is all happening, we don’t even notice that Richard has seemingly gone missing from the stage. As the band finishes the song and the lights dim, solidifying the end of the first act (of this epic production). A bad-ass beat begins to fill the arena, and our eyes are then diverted to the small centre stage from which the show began. Behold! It’s Richard ZK and he’s on the keys and making bootys shake in the audience (with a weird little disco-style number). The bridge descends again, and here comes the band crawling and shackled, being kicked and whipped by a cross-dressed Christoph Schneider (drums). They hit the small stage, and Schneider takes one good whack at Richard’s hands to get him to stop playing. What follows is an arena-shaking version of ‘Buck Dich’. Because of some past legal problems for performing this song (they were arrested in ’99 in Worcester, Massachusetts for indecency), us Americans don’t get the performance that was originally intended for this song. Instead, Till has some sort of strange contraption on his head that sprays water everywhere. There are some real standout moments of banter here between the bandmates. Certainly the best thing about this second stage is its size. For a band that usually plays on very large stages, they perform just as tight when they are cramped together. The stage also allows for people in the back of the arena to get a better look at the band they came to see. 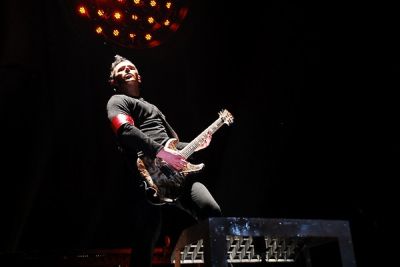 After ‘Buck Dich’ comes a anthemic performance of ‘Mann Gegan Mann’, the sole song to be played from 2005’s ‘Rosenrot’. Closing out this first encore set is the ballad of the evening, ‘Ohne Dich’, and everyone had their swaying lighters out. As ‘Ohne Dich’ concludes, the band make their way back to the main stage. Till thanks the crowd, and the band ducks out for a few while the audience Is left wanting more.

After a brief hiatus, the band returns and rips through ‘Mein Herz Brennt’, ‘Amerika’, ‘Ich Will’, ‘Engel’, and ‘Pussy’. ‘Amerika’ sees the audience get dumped with red, white, and blue confetti. The end of the show sees the band perform its popular single from their latest studio album ‘Liebe Ist Für Alle Da’, ‘Pussy’. This had one of the most memorable (if not quite comical) endings I have ever witnessed to any show… ever. Till climbs aboard what looked like a cannon that was painted like a giant penis, and proceeded to spray everyone, over and over again, with ludicrous amounts of soapy foam. This goes on for a good portion of the song, and everyone seems to really get a kick out of it. Till then gets off (the cannon), and takes the stage as the song finishes. Finally, they stand together and bow to the audience (who are still going nuts). Till thanks the crowd and tells us they love us (aww…), and then, the band departs for the final time.

I really believe that anyone would have enjoyed tonight’s show. Even if the style of music doesn’t suit you, I think if you have any appreciation for performing arts you will absolutely love it. The energy tonight was has been “on another level”, and I can’t remember the last time a live show made me feel the way Rammstein did. 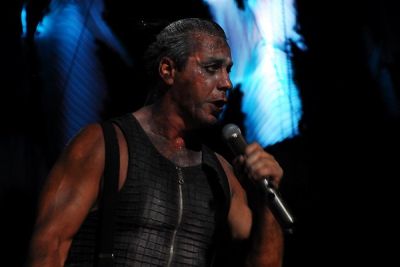 On an ever-so-slightly-brilliant tangent… did you see these kids covering Rammstein? Epic!