Nothing beats the fun, upbeat, horn driven atmosphere of a ska gig. From choreographed dance moves to covers of pop songs, you can’t help but smile when you walk into the room. The genuine good natured fun of the ska punk genre is embodied in juggernauts, Reel Big Fish. 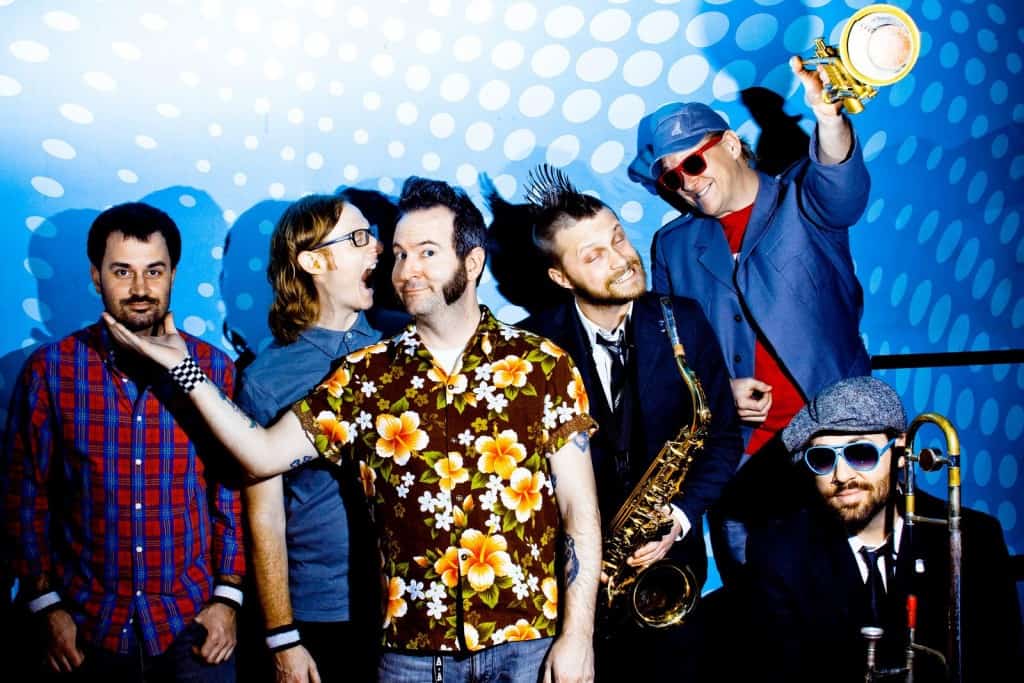 Seas of eager fans pour through the entrance of the O2 Academy in Leeds as the doors open. The normal whispers of small talk, commonly heard through opening acts, are demolished as Suburban Legends take the stage to the ‘Top Gun’ theme song and instantly command the attention of the room with group choreographed dancing on stage and an unbroken energy from start to finish. Through frequent crowd participation and even a Little Mermaid medley the six piece ska veterans have the entire packed room moving, ready for the main event.

The lights drop and Europe’s ‘The Final Countdown’ plays to greet the band as they line up on stage in the methodical nature of ska punk. A packed venue of screaming fans instantly chant along with vocalist Aaron Barrett as they start with ‘Everyone Else is an Asshole’. Continuing with the common theme of comedic aggression the evening moves on with ‘All I Want is More’ followed by ‘Another F.U. Song’. It’s immediately obvious that the stage is filled with seasoned veterans who genuinely enjoy what they’re doing and don’t need any gimmicks or special effects; just witty banter, great songs, loyal fans and some kick ass dance moves. It’s impossible to stand still through the infectious nature of the songs and the respect and adoration buzzing around the room.

With a discography spanning over twenty years the band managed to fit in early classics such as ‘Trendy’ and ‘The Kids Don’t Like It’ as well as more recent songs like ‘Your Girlfriend Sucks’ and ‘I Know You Too Well To Like You Anymore’. Front man Aaron Barrett states “this is a song from the 90s that we’re very well known for performing”, leading into a brief intro of Nirvana’s ‘Smells like Teen Spirit’ quickly followed by one of the band’s biggest hits ‘Sell Out’. The band maintains the lively and entertaining pace of the show with ‘Kiss Me Deadly’ and ‘Your Guts (I Hate ‘Em). Synchronized kicking, sax puns and impressive displays from the horn section continue to carry the show even through slower tracks like ‘You Don’t Know (Skacoustic)’ and ‘Where Have You Been’ and continue through ‘Don’t Start a Band’, ‘Ban the Tube Top’ and a cover of Toots and the Maytals’ ‘Monkey Man’.The band leave the stage after ‘She Has a Girlfriend Now’, which is promptly followed by screams of ‘more’ from the crowd. Returning to the stage for an encore the band briefly play ‘ole ole ole’ followed by an obligatory Yorkshire chant and ‘Boss DJ’.

Giving the fans what they’ve been chanting for all night, ‘Beer’ begins to play and the room immediately jumps together. Contributing to a truly memorable finale, Barrett pours an entire bottle of beer on himself during the song and the band goes into a brief sample of The Offspring’s ‘Self Esteem’ before finishing the rest of the song, leading into an energetic finale of the band’s well known cover of Aha’s ‘Take on Me’.