It would be a surprise, for sure, if history were to somehow unearth a duo able to extract more from the humble acoustic guitar than the thoroughly unique rock ‘n’ rollers, known as Tenacious D. 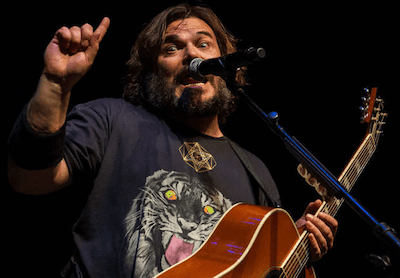 During the resurgent pair’s Old School Acoustic Show at the gorgeous Fillmore Theatre in downtown Miami Beach, they thrashed that timeless combination of wood and steel with the speed and ferocity of a sexy mountain lion, yet plucked and strummed with the shy tenderness of two nervous young fillies exploring each other’s bodies after one too many glasses of cheap chardonnay.

Indeed, the endearingly unkempt and Rubenesque Hollywood megastar Jack Black and his rotund musical soulmate Kyle Gass pack enough raw sexuality into a two-hour set that even Mother Teresa would leave bemoaning the lack of a fresh pair of bloomers. “But we thought the D was done,” we hear you cry? “That’s so 2001.” Not so.

‘The Pick Of Destiny’ movie, as poorly as it was received (whatever, screw the haters, we liked it), did not close the chapter on this most unorthodox pair of modern rock stars. “Just like the Phoenix”, as the scruffy-bearded Black croons in the fanatically received band’s opening number, The D has risen again and the world is a better place for it. The unashamedly comedic pair, unaccompanied on this guitar-only show (there was a recorder and a saxaboom too, but more on that later), returned with a new studio album, ‘Rize Of The Fenix’ in May last year, rekindling their 22-year alliance for at least one last hot-sauce-infused, egg and cheese sandwich of a rock-and-roll-rollercoaster ride.

The laughs are there in abundance, epitomised by Black’s irrepressible vocalisation of musical instruments and his mock-cruel taunts aimed towards his supremely talented partner in crime “Rage Cage”, However, make no mistake, this is no mere stand-up show with guitars in tow, it is verse offered in tribute to the heavy metal gods of yester-year.

After ‘Phoenix’ rocked the house and kicked some ass by assuring long-term fans they could ‘get a new Tenacious D tattoo’ (after being forced to laser them off in the aftermath of the movie misstep) the pair move on to the new album’s ‘hit’ song, Low Hangin’ Fruit, which is, unsurprisingly, a musical visualisation of the band’s desire to make whoopee with the less desirable ladies. “Targets or goals which are easily achievable and which do not require a lot of effort,” as that noble translator of common speech, UrbanDictionary.com puts it.

Part of the joy of seeing this band in the flesh is the way unrelated tracks are welded into a charming story. Following ‘Senorita’, an ode to a “Mamacita” who broke their hearts, Black sees fit to deride his constant companion for a perceived lack of on-stage effort. Kyle storms off, prompting JB into a heartfelt rendition of ‘Dude, I Totally Miss You.’ The inevitable emotional reunion, leads to ‘Last Week Kyle Quit The Band (Now We’re Back Together)’, before the trilogy is completed with an ode to ‘Friendship’. The crowd in Miami, more commonly associated with the “wicky-wicky” (make the sound…go on) of terrible DJs, lap it up.

The rest of the set interchanges the band’s finest moments, from all three studio albums, albeit with a preference for those acoustically flavoured tracks. ‘Kielbasa’, ‘History Of Tenacious D’ and the awesome ‘Kickapoo’ from the ‘Pick Of Destiny’ (minus the cameos from Meatloaf and the dearly departed Ronnie James Dio) follows, before Black rocked an epic solo on a plastic saxophone called the saxaboom.

The band’s ode to their roadie’s tireless efforts to “get that sh*t up on that f***in’ stage” precedes a quite awesome rendition of Led Zeppelin’s ‘Rock And Roll’, demonstrating beautifully the has-to-be-heard-to-be-believed beauty of Black’s voice. Damn, this dude has a range that leaves most frontmen coughing up dust along with an everyman quality that makes you forget his A-List status. Talented sonofabi**h. We’d resent him if he wasn’t so ‘effing lovable.

‘The Ballad of Hollywood Jack And The Rage Cage,’ which charts Black’s rise to becoming a red carpet deity, while Gass goes insane with jealousy, is another tremendous highlight. We’ve never seen anyone rock out so hard to a recorder solo before, but the dude standing next to us deserves some kind of medal for that display. Come to think of it, we’ve never seen a recorder solo before, so the precedent has been set.

The D completed the set with its signature track ‘Tribute’, a massive fan favourite, and ‘Double Team’, a song which quite marvellously conjures the image of the pair working over a lady they met in a jacuzzi following a hard day’s rockin’!

But so schooled are the pair in the annals of rock and roll history that an encore is sure to follow, highlighted by Black’s self-congratulatory, five-minute self-introduction and concluded by that family sing-a-long classic ‘Fu** Her Gently’. Because sometimes you got to make some love and fu**in’ give ‘em some smooches too; a life-lesson worth remembering from a very memorable evening.