Originally from Cincinnati, Ohio, indie rockers The National garnered a large following after the highly successful ‘High Violet’, what could be called their ‘breakout’ album selling over 600,000 copies worldwide. Last year’s follow-up ‘Trouble Will Find Me’ only served to add to that success, and is arguably their best album, though only narrowly better than its predecessor. They’ve become kings of poignant, thoughtful lyrics and music that can be both energetic and batter you unrelentingly with themes of sorrow and doubt, so there’s rarely a more emotional musical experience than listening to their records. Having seen them once previously at Leeds festival in 2011 where the crowd was not as involved as you’d like them to be, it was nice to know that they could bring all that stuff out in a live setting at their very own show. 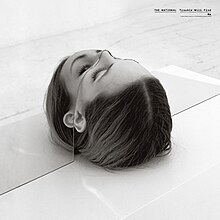 Boy, do they deliver. Sauntering on stage dressed as smartly as you’d expect with lead singer Matt Berninger rocking a three-piece suit and carting with him a bottle of wine in an ice bucket, the band are quick to launch in to opener ‘Don’t Swallow the Cap’, possibly the song of the new album both lyrically and musically, bouncing along almost whimsically as Berninger’s lyrics creep slowly in to the back of your mind. From his greeting and the first few notes of the song it is clear that he may be sporting a sore throat, but this problem is easily overcome as he packs every word with the requisite emotion, easing himself slowly in to the set. The rest of the band already sound spot-on, drummer Bryan Davendorf in particular already impressing with his pounding, rhythmic drums serving as a mainstay through almost every song, a pivotal cog in The National’s intricate machine.

Powering through fan favourites ‘Mistaken for Strangers’ and ‘Bloodbuzz Ohio’ with consummate ease, the band take an increasingly enthusiastic crowd on a journey encompassing most of their latest album and ample amounts of ‘Boxer’, their fourth record, and the aforementioned ‘High Violet’. Standing out particularly are energetic performances of ‘Sea of Love’ and ‘Afraid of Everyone’, a song that builds up so gradually the rousing crescendo at the end leaves you on an unquestionable high as Berninger bellows “your voice is swallowing my soul soul soul” as loud as he can, throwing the microphone across the stage as if to rid himself of the burden. The passion emanates over to the crowd pretty quickly, everyone singing along to every word religiously achieving that feeling of togetherness that’s vital for a band as ready for an emotional connection as The National, who will you to empathise with every character in their songs.

A few touching songs follow, Matt dedicating the performance of ‘I Need My Girl’ to bassist Scott Davendorf who recently had a baby daughter, giving a song that’s already heartbreakingly poignant an added edge. They weave these moments of contemplation and gut-wrenching despair with the more passionate and intense songs beautifully, each song flowing seamlessly from the last. This is evidenced when the gentle crooner ‘Green Gloves’ transitions fantastically in to the brash, pleading ‘Abel’, Berninger getting lost in the passion of the song once more as he gives no regard to his poor throat, screaming “my mind’s not right” with as much gusto as he can possibly muster, gallivanting around stage as he does so. It’s exhilarating to watch and soon everyone is bellowing along eagerly.

Choosing to end the main set with the classic ‘Fake Empire’ complete with rousing trumpet sequence, the band leave the stage to a raucous reception and are soon back for a rousing encore that starts with the relaxed ‘Ada’ and blossoms in to the fiery ‘Mr November’ where Berninger finally gives in to his desire and traverses the crowd, causing much consternation for the security staff but again serving to get the crowd worked up to the extent that the last three songs serve as one big singalong. Transitioning in to ‘Terrible Love’ doesn’t stop the excitement, and the intensity is there to be seen. Not quite satisfied with leaving on that note, Berninger and co choose to leave after an acoustic performance of ‘Vanderlyle Crybaby Geeks’, the unassuming closer to ‘High Violet’, transforming it in to something revelatory, rousing and extremely special as Berninger sings almost none of it, letting the crowd do all the work. Ultimately what The National provide is a show that has it all: flawless song performance, passion and an engaged and involved crowd make the gig a truly unforgettable one that will shine for years to come.

You can look at the setlist here