Where are you York? Man, one of the best (and weirdest) bands on the planet at the moment, and you didn’t go? Sadface. We know, it’s not like we’re at every show, by every band in York ever but still, it’s a real shame not to see more people out with us here tonight. 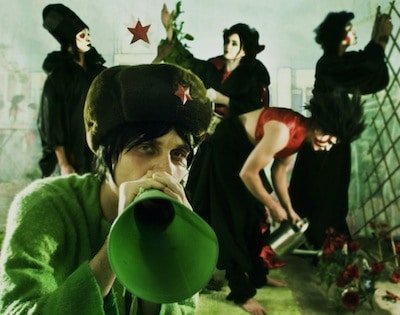 The Red Paintings have a distinct image – it’s all about the art, baby. Vocalist Trash McSweeney wears a strange hat that makes him look like a spaceman…spaceeeemaaan. Anybody heard Babylon Zoo? No, we digress.

Anyhoo, the band’s energy tonight is excellent, considering there’s only a few people about, the group are on decent form, and they put on an excellent show – core tracks like ‘The Revolution Is Never Coming’, ‘Wasps’ and ‘You’re Not One Of Them’ are showcased – and a live painter joins the band on-stage for the latter part of the set.

It all looks pretty cool, and in terms of modern modern angst-ridden alternative rock, it doesn’t get much better than that. Yeah, it’s a Monday, but you missed out, all right? There are lucky cats and glowing sh** on stage, man. If you catch them, it’ll be one of the most trippy live scenes you’ll ever see.