Four years after their first show up North, The Skints return to The Cockpit in Leeds bringing with them a night of pure reggae-rock awesomeness with support from Jake And The Jellyfish and The Drop. Cockpit is sold-out here tonight. 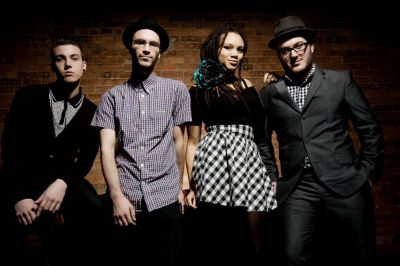 First on is local band Jake And The Jellyfish, a four-piece band playing a mix of punk, folk and reggae. Lead vocalist Jake has a very original (and raspy) voice that is (nearly) perfect for this style of music. The band are also very energetic, and their performance on the whole stays with us for the entire evening. We’re in such a good mood after watching this lot, and we expect big tings ‘n’ that. Brilliant stuff.

Next on, we’ve got eight-piece group The Drop, These guys from Reading fill the room, not only physically, but also sonically; this band mix reggae, dub, roots and rock all into one great (and wholly passionate) package. The band includes (the delightfully named) Dandelion on vocals (and percussion), alongside Leon on guitars, Ryan on keyboards, Jason on percussion, Chaz on bass, Ed on drums, Jonny on trumpet and Joe on the sax. It’s clear to see that these guys have a great range of talent between them and it really shows when they perform out live.

Headliners The Skints (as expected) blow us away with their movement and energy. Musically they drive the pace forward, and their effortless  feel-good vibes engulf room and feed some serious skanking. With Jon Doyle slamming his bass and Joshua Waters Rudge on guitar and vocals (this dude’s got some serious style, we must say), he has everybody moving, jumping and joining in. Tonight though, Jamie Kyriakides’ vocals (combined with his playful off-beat drumming), alongside Marcia Richards’ diverse and honest performance , we are really treated to something special. Indeed, Marcia is one of the most diverse performers we’ve watched in a while. Tonight, she plays the keyboard, saxophone, flute and melodica, and impresses all in attendance with her on-form vocals and reggae-tinged rapping for standout ‘Rat-at-at’. Arenas beckon.