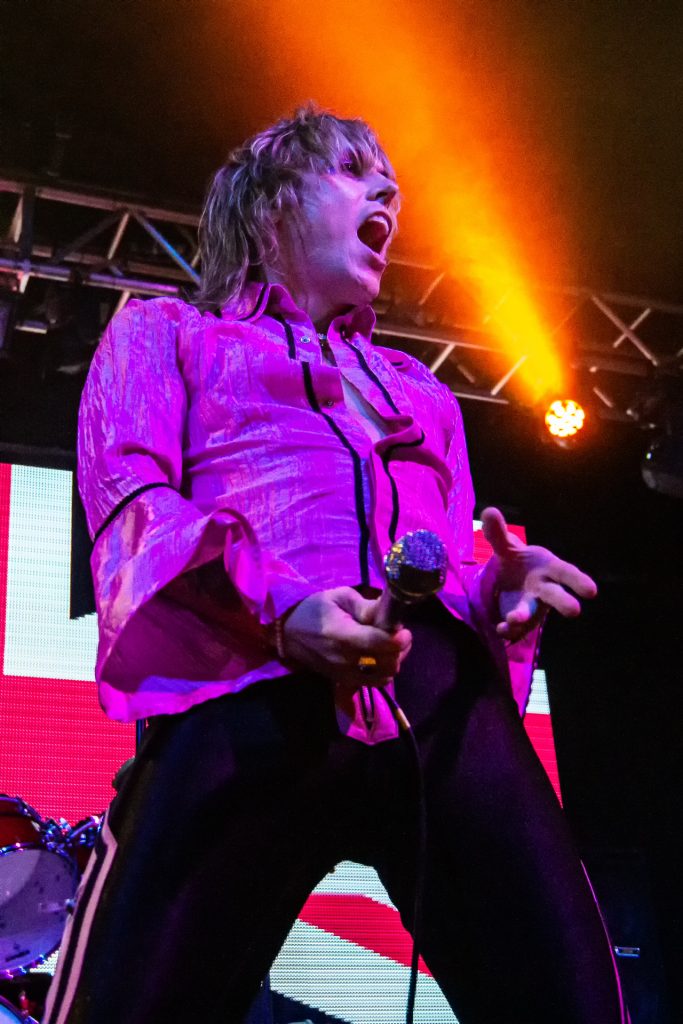 The Struts in Leeds – The finest good time party rock ‘n’ roll band around right now, and they are British !!

The Struts are back in Leeds again, this city has welcomed them since the early days in 2013 from Live at Leeds to last year when they played their 1st post covid gig opening Leeds Festival Main Stage with a stunning set in the sunshine. We’ve hit the big heatwave of the year this week so the temperature is in the 90’s outside and it is Graduation Day for the university, a curious mixture of heavy rock fans in t-shirts and students in posh gowns and hats with eager and proud photo taking parents tagging along.

Tonight, was the final night of their homecoming tour, they are doggedly resolute in their quest to conquer their home country, despite having a much wider audience market elsewhere, particularly in the US. The Leeds Stylus will be packed with hungry and sweaty UK ‘Strutters’ who have loyally followed this band over the last 10 years and are up for a long overdue party.

First though, Cardinal Black as support and we really need to start talking about the amazing guitar work from Chris Buck. Buck is becoming a much sought-after bluesman and it takes the opening salvo of ‘Rise Up’ for this audience to realise just how phenomenal he is. There are technical difficulties galore, on stage monitors are not working, at one point Buck’s mic stand collapsed on him and then his guitar strap broke, but this didn’t deter him from producing solo after brilliant solo which completed every track they played tonight. 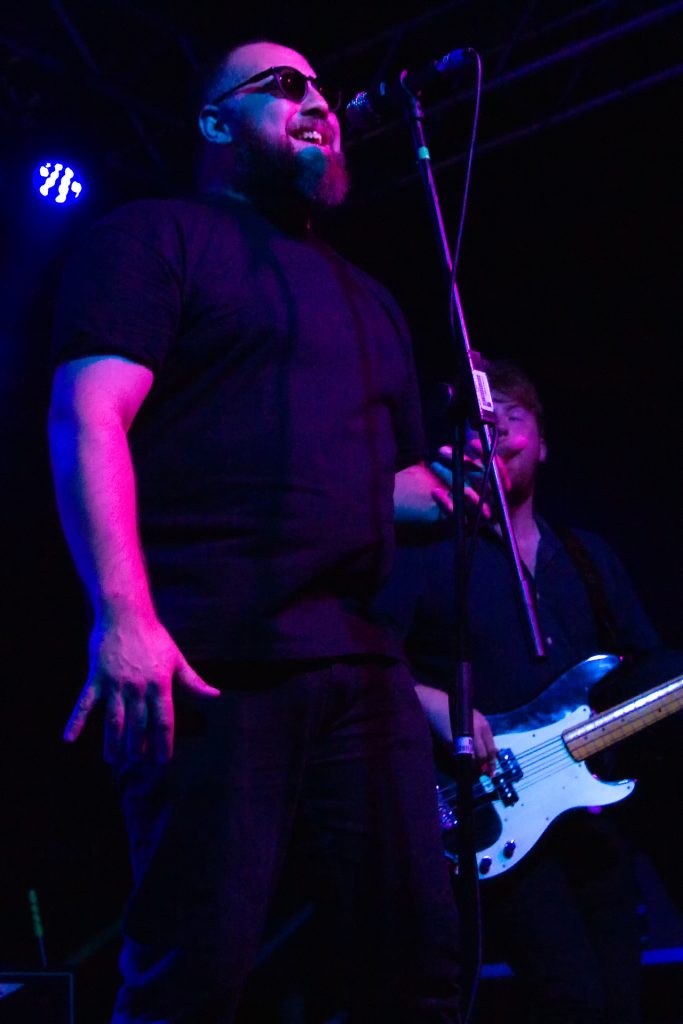 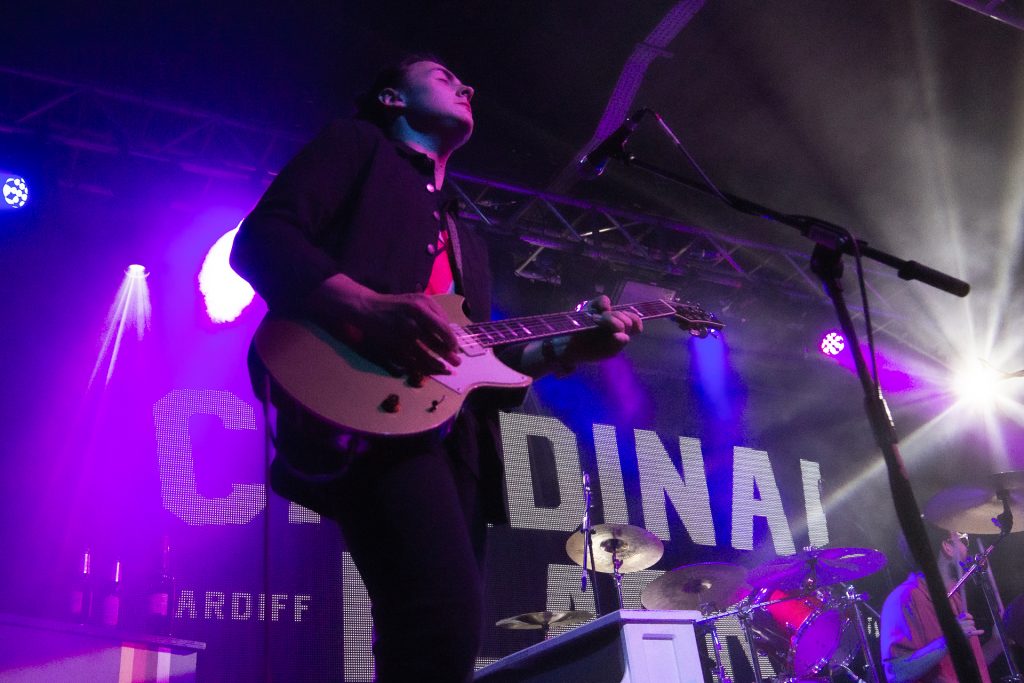 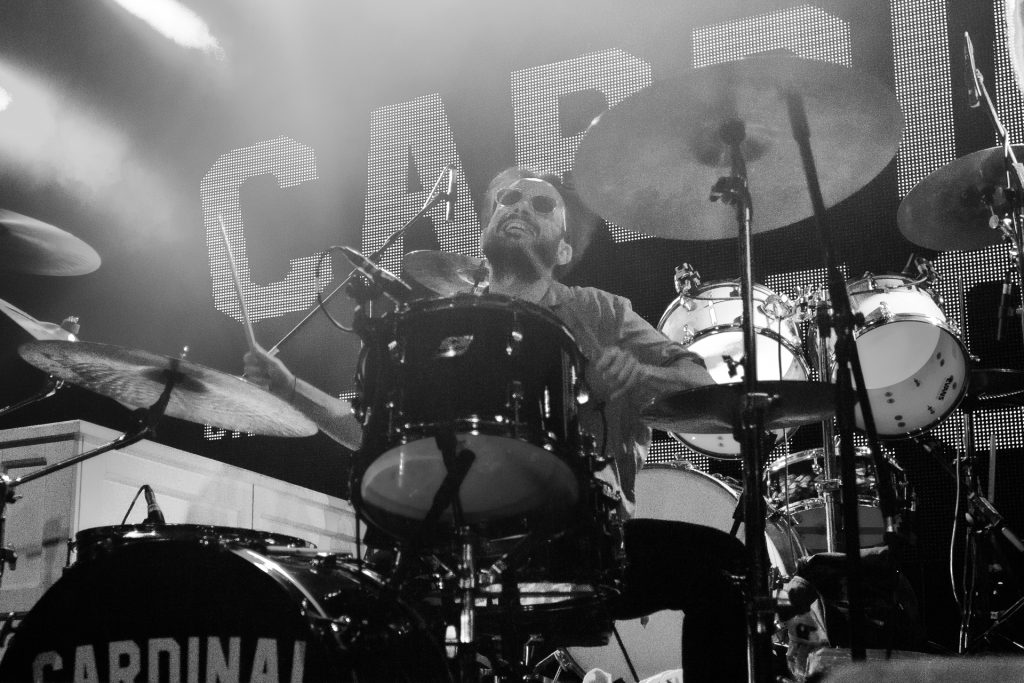 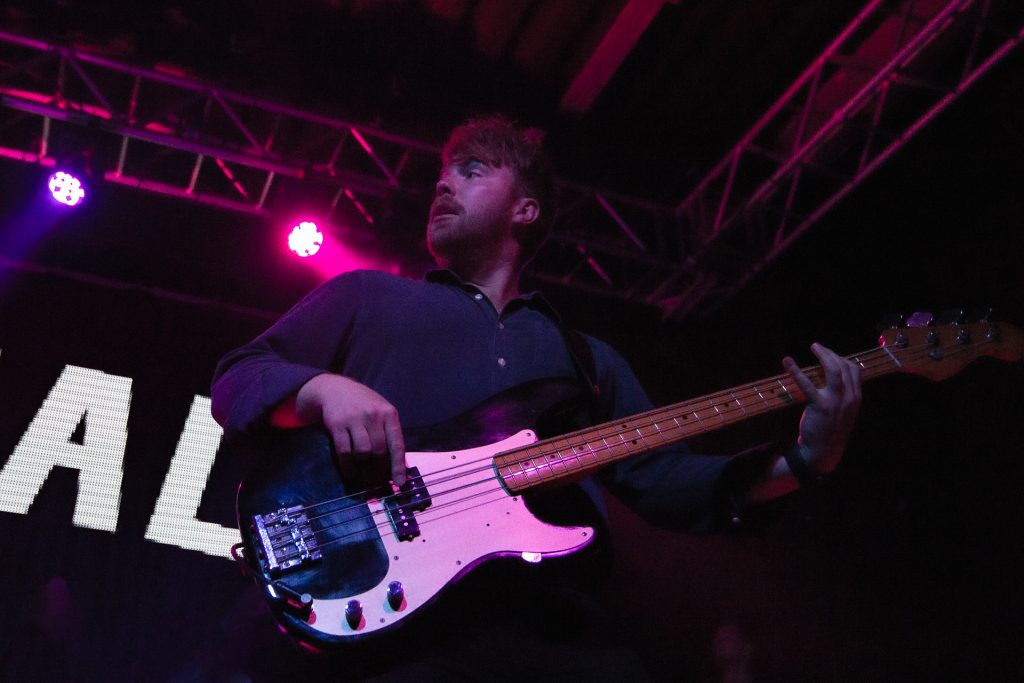 The whiskey and honeyed vocals of Tom Hollister are the most deep and soulful this side of Gregory Porter, so powerful and tender at the same time, he’s up for fun though as he constantly pokes and makes fun of their bass player at one point holding his hand singing a tender refrain and then explaining that he is missing his wedding anniversary for this – “Can someone please video this so I can send it to my wife”.

Never before have I witnessed a more soulful blues combination with Hollister’s perfect vocal tones and Buck’s incredible guitar – a match made in heaven and it won’t be the last time I see this lot play live.

It’s a brave band that have Gary Glitter on their speakers before the impending band arrival air raid siren sounds but I’m guessing they don’t really care about that, it’s all rock’n’roll anyway and they just want the party to get started before they take the stage. Adam, Jed and Geth come on first, leaving a short gap for Luke Spiller to make his entrance. Wearing a pink jumpsuit he just has to flick his fingers and this crowd are copying his every move. Whether that is hands above your head clapping, call back responses or just jumping up and down – he is a master at getting a reaction from an audience.

‘Primadonna Like Me’ is such a fine tune and has been their opener for the last few years, it is an immediate crowd pleaser and then straight into ‘Body Talks’ which as an opening one-two punch knockout it doesn’t get much better.

The Struts are probably the finest export of good time party rock’n’roll, The Darkness do similar things but in Luke Spiller they have a frontman with not only a great voice but the looks of Freddie Mercury circa 1974 mixed up with some slightly camp Michael Jackson and David Lee Roth moves that most frontmen would kill for.

The catchy chorus rock cliché punchlines continue, and the sweat is visibly dripping off all members of the band and audience. Small cups of water are handed out by security which last about a mouthful before the sweat starts to pour again. It is unrelenting until ‘One Night Only’ and then we are back to it for ‘Dirty Sexy Money’ which was one of the highlights of a great opening set.

They are road testing a new song ‘Fallin’, which will be a new single to released in the Autumn and it fits perfectly into their current set, clearly their new record label are looking for more of the same please. Another 3 minute break in the sweatfest with a beautiful acoustic rendition of ‘Mary Go Round’ before we turn the temperature up a notch for ‘Put Your Money On Me’.

For the older ‘Strutters’ there is a 6-song medley incorporating a selection of 8 year old material, a heartfelt “thank you” from Luke for the loyalty those fans have shown. 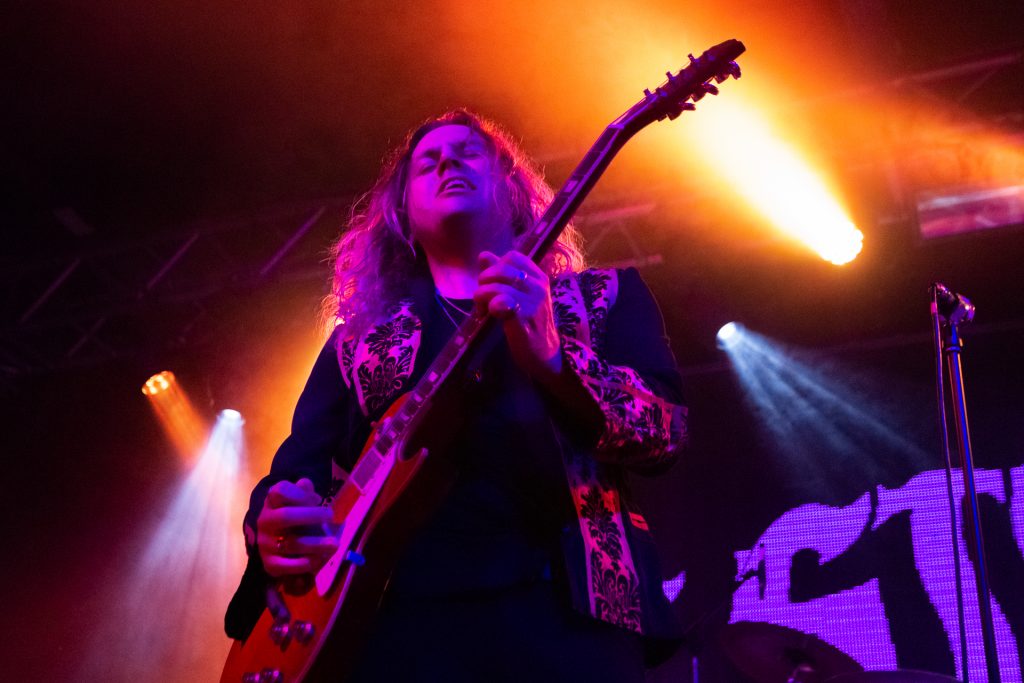 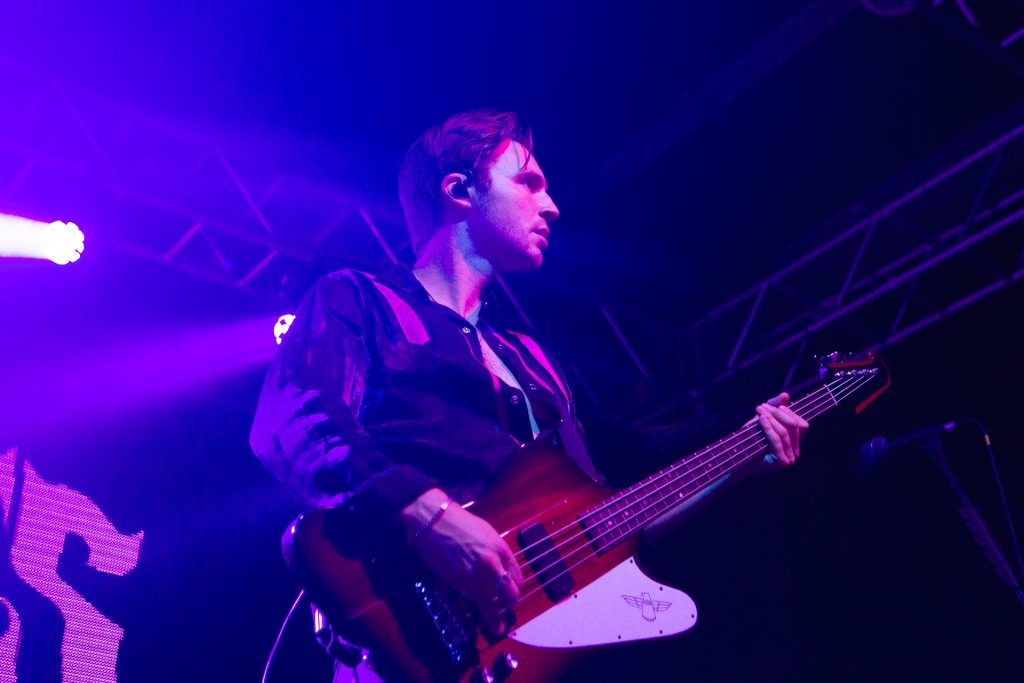 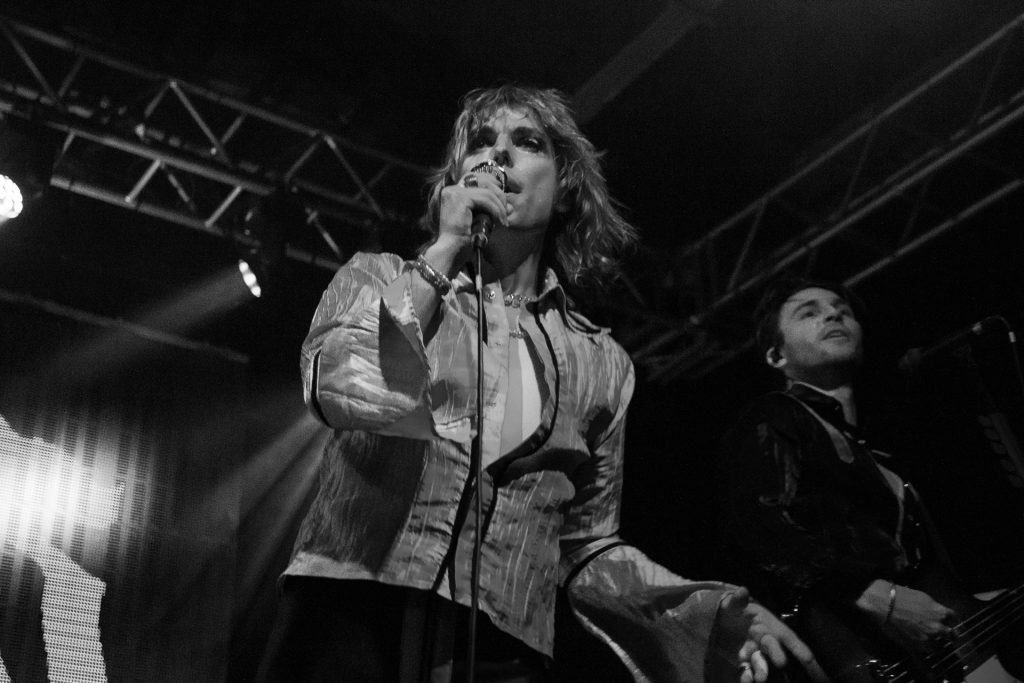 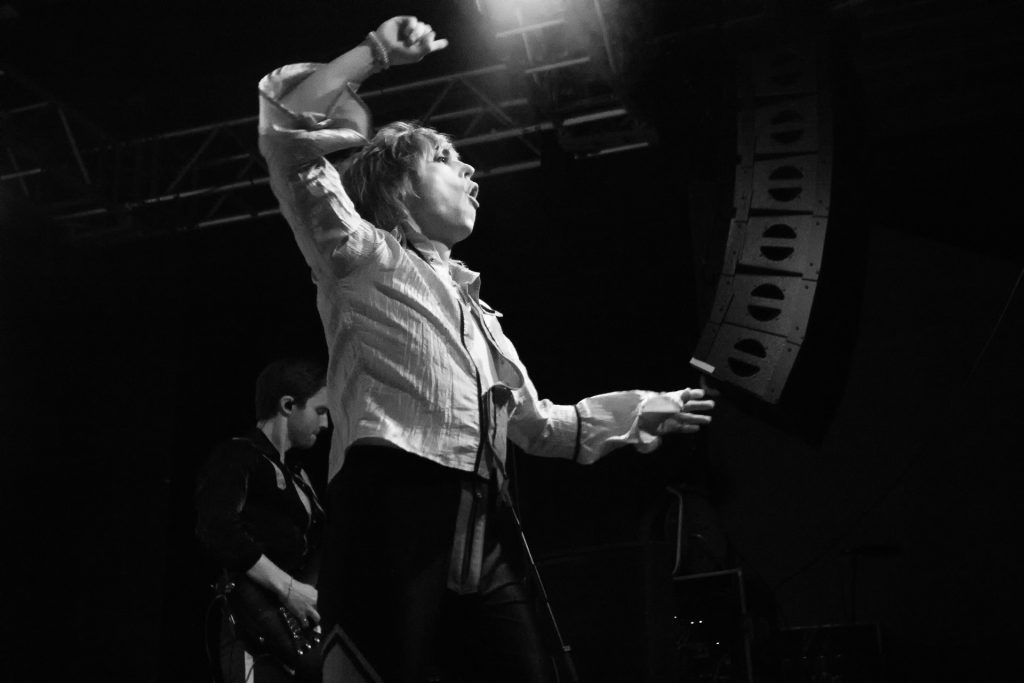 The band are not scared of a cover or two, with KISS’s ‘Do You Love Me’ being on last album “Strange Days’, sadly not played live, but Chris Isaak’s ‘Wicked Game’ is given a rock overlay and it works, really showcasing Spiller’s vocals and Adams guitar work.

‘Wild Child’ follows but not the W.A.S.P. version (– I bet they could do a great version of that though), it is heavy and bombastic and then we get ‘audience participation time’. The classic split the audience down the middle and see who can sing the loudest although what Luke is getting us to sing back is something that even Freddie wouldn’t try. The opposite side to mine won, so I can’t have been trying hard enough.

Luke asks if anyone is seeing them for the first time to which surprisingly there were quite a few – he then welcomes them to the family, a kitsch sentiment perhaps, but it does feel a little like an exclusive club where everyone is truly welcome to drop in and just have some fun for a while, don’t take yourself too seriously and just rock out for a couple of hours. If you can crouch down and spring back up and jump around, all the better – for some folks the old knees were struggling at this point.

For the encore Spiller sits at the white piano and I half expect him to play the opening bars of ‘Bohemian Rhapsody’, he probably could. His hair is matted to his face and he has a towel around his neck, what we get is a beautiful piano version of album title track ‘Strange Days’ and the rest of the band come back on for the last chorus.

Then final song must be fans favourite ‘Could Have Been Me’. One last opportunity to get a singalong in and then they are gone, only pausing for a quick bow whilst the ‘Only Fools and Horses’ theme tune is played. 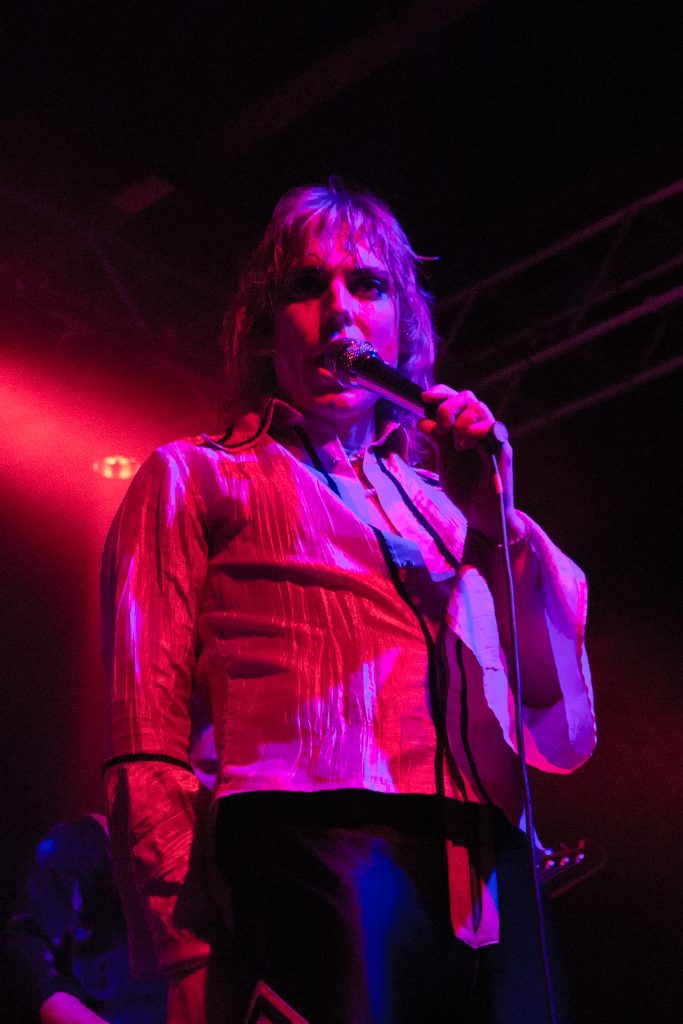 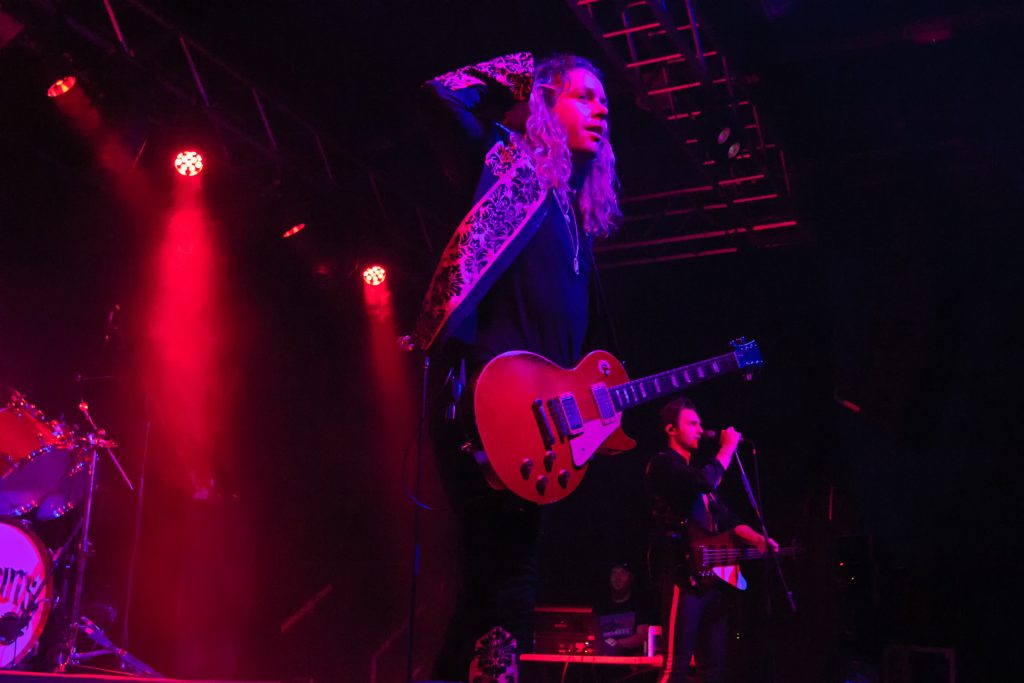 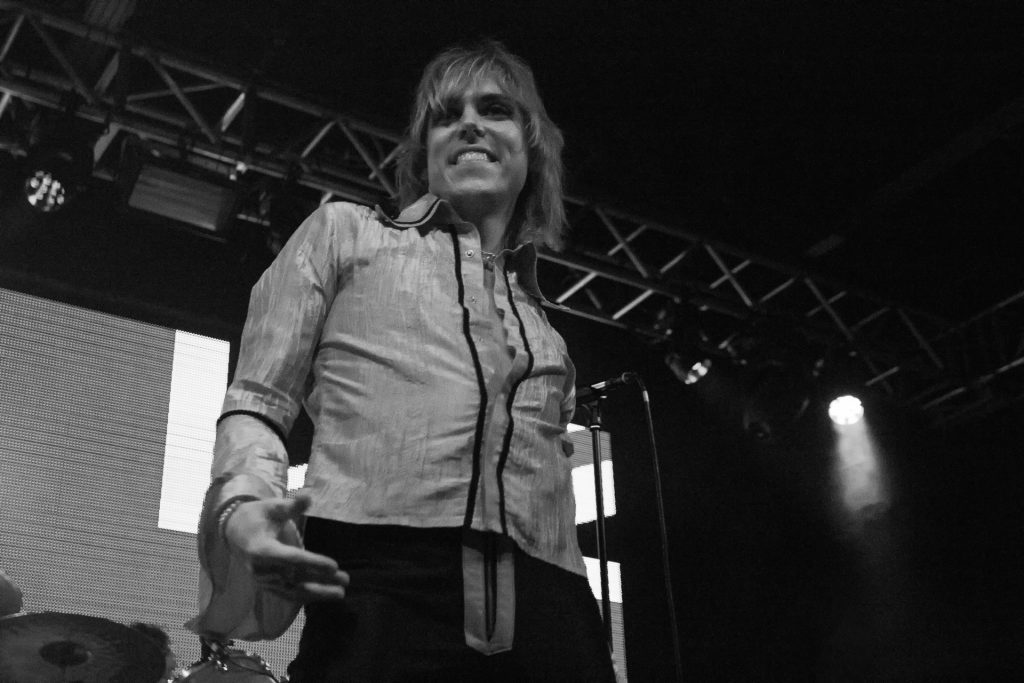 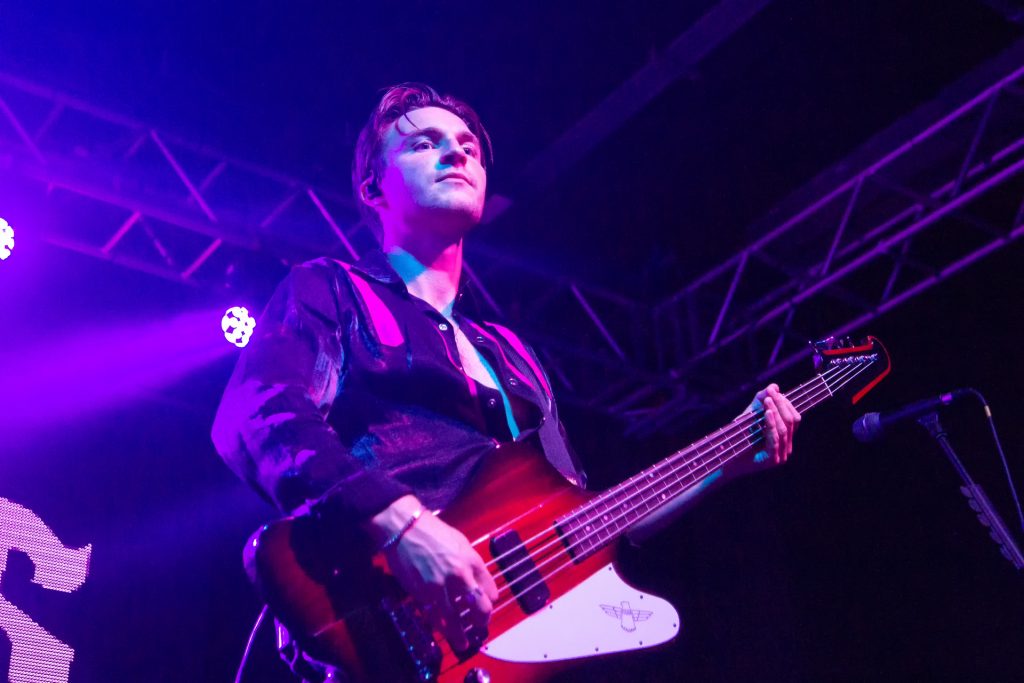 The Struts – don’t forget them, they are British, they are brilliant and one of the finest good time party rock n roll bands out there at the moment. Living in California now, they don’t play their homeland that often, so when they do, make sure you get to a show. If Classic rock n roll needs saving for tomorrows youth, they are probably the best chance we have got.

Powerball in 2022. Tips for Winning