The Virginmarys’ own website includes a line about satellite towns breeding big ambitions and last month saw Macclesfield’s finest travel the few miles up the road to The Ritz in Manchester for their biggest headline gig to date. 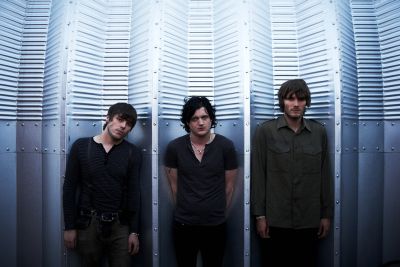 Almost a homecoming, then, for a trio who are beginning to gather quite a following—this would still provide something of a litmus test as to whether their ambitions are on the way to being fulfilled.

Classic Rock magazine have been big supporters of the band for some time and it showed with the large contingent of “veteran” gig-goers that mingled with younger element of the crowd. Each individual’s age was given away by whether they performed a little test “bounce” on arrival inside the Ritz to see if the famous dancefloor still behaved how they remembered.

First up, Crobot paid no heed to the early start they had been handed. The Americans made a big impression on the incoming crowd. Singer Brandon Yeagley’s perfectly-tuned pipes soared over the bands heavy-groove riffing. (Think Rage Against The Machine or Clutch and a sprinkling of Monster Magnet with Robert Plant and Myles Kennedy’s lovechild on vocals and you have a close approximation).

The band wasted no time in making friends in Manchester through their enthusiastic performance on stage, and at both the merchandise stall and outside the venue after the gig.

Next up were Tax The Heat. The Bristolians’ sharp suits will have raised eyebrows at first but any worries about the band being fifties throwbacks or The Hives copyists were soon dispelled.

With only a debit EP to their credit so far, Tax The Heat still managed to get the crowd clapping along to their modern take on straight-ahead rhythm and blues. No mean feat for a support band. By the time they left the stage, it was Tax The Heat’s keen ear for a tune, rather than their keen fashion sense, that had people talking.

Manchester is, of course, a mecca for live music in the UK— tickets for concerts across this music-mad city are usually snapped up quickly. The Ritz is an important fixture in the Manchester live music scene and acts as a step up for many bands moving on from the smaller of the Academy rooms, or the Ruby Lounge, yet is big enough to accommodate many bands of note. It was heaving by the time the headliners walked on the stage.

The Virginmarys boast a huge sound that blends hard rock, punk and grunge with modern lyrics—which perhaps goes some way to explaining their appeal to young and old(ish) alike. Tonight was a triumph for the trio.

It says much of the confidence that the band now exude that they felt able to weave songs being readied for their second album into a set that included rousing versions of ‘Dead Man’s Shoes’, ‘Just A Ride’ and ‘Running For My Life’ and deeper cuts such as ‘Northern Sun’.

A particular highlight was ‘Portrait Of Red’ — aired close to the end of the main set. Despite (or because of?) its ambiguously dark lyrics, the song has a chorus that just begs to be screamed out loud in unison. The whole of The Ritz duly obliged and the dancefloor bounced in appreciation.

Frontman Ally Dickarty made a point of acknowledging the many friends and family that were in attendance for The Virginmarys’ return home. Upon closing their two song encore with ‘Bang, Bang, Bang’, the boys made a hasty exit—no doubt to go celebrate with them. They can count on a hell of a lot of new friends in Manchester now.