The rise of The Wytches has been a pretty sudden affair. That rise has included an appearance on the NME stage at Leeds and Reading festival this year, billboards advertising their début album ‘Annabel Dream Reader’ easily visible wherever you walked on site, and all the extra publicity is definitely deserved. Their heady concoction of psychedelic and surf rock mixed with grungy elements and even a smattering of hardcore punk is addictive and if their first work is anything to go by, they have a brilliant future ahead of them. 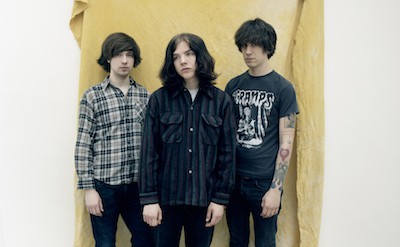 The three-piece make their appearance on the stage at The Duchess as part of their UK tour in support of the album, and have already garnered a devoted following some of which joined us here, the front rows of the dedicated crowd headbanging enthusiastically through most of their set having been drummed up brilliantly by the double whammy of ‘Digsaw’ and album highlight ‘Burn Out the Bruise’, played with a vibrant and frenetic energy that’s hard to ignore. Lead singer and guitarist Kristian Bell’s vocals have a rawer edge live, that broiling emotion that lurks in his cracking voice coming out in full force here as the frantic, swirling riff makes mincemeat of your eardrums.

The rest of the set follows in a similar vein, the live setting adding a sense of desperate energy to even their slower, more considered songs. Another highlight is ‘Summer Again’, a song that builds to a thundering crescendo, a hidden gem on the album given its own space to shine here, the juxtaposition between the calmer sections of the song and their trademark frenetic sound give it the added gravitas of a song that’s just waiting to burst at the seams.

While not being ones for crowd interaction – the band actually seem pretty shy when it comes to this- the set exudes enthusiasm and character, as all three of them put every ounce of energy they have in to every song. Drummer Gianni Honey is also worth a mention, pounding the drums savagely throughout, providing the cement for the wall of noise that they hit you with. It all comes together brilliantly again with ‘Wire Frame Mattress’, arguably their most layered song with one of the most infectious riffs around, and when it leaps to life it’s hard to move along almost as frantically as the band themselves are as they become clouds of long black hair, immersed totally in the experience.

It’s definitely the case that The Wytches give every song everything they’ve got, and this makes for  a set that doesn’t feel compromised or phoned in, but totally organic and involving. With only an album to work with they do a great job of formulating a set that moves along at a good pace, and by the time the end rolls around there’s definitely no feeling that we’ve been short changed here. It’s a set full of promise and moments of real excellence, and a good sign for a band that will continue to grow in to what will hopefully be a second album and more energetic, powerful performances like this one.