We’re in Fibbers, and it’s a Friday night. Sadly, in these trying times, that doesn’t necessarily make for a large crowd, but that’s not going to stop the three bands on tonight’s bill from giving it their all. 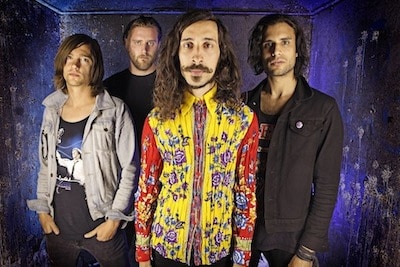 First up, are York’s very own The Bastard Sons, whose brand of good-time, heavy duty punk rock is a solid warm-up for the evening. ‘Hot Town’s bouncy tempo gives way to a vicious breakdown, and set-closer ‘Salem’s Rot’ mixes punchy guitar heroics with passionate howls – it’s what you might expect from the genre, but it’s executed well. While it’s clear that the band care about their music, they’re also not prone to taking themselves too seriously either – as evidenced by frontman JJ’s irreverent banter and the fact he’s sporting a Justin Bieber t-shirt. Ironically, one would assume, but you never know…

Moving (slightly) further away from home, Leeds-based five-piece Black Moth add a touch of spice to their heavy rock sound via female vocalist Harriet. She looks the part, clad in black and leather, and she sounds good too – her performance jumps between being surprisingly soulful and a more direct, brash tone. Opening gambit ‘Blackbirds Fall’ is a weighty blues-metal stomper, and ‘The Articulate Dead’ buzzes along with a punky energy while Harriet plays the siren with simple but seductive lyrics (“I like you/and you know it”). The band certainly know how to mix their set up – from it the rapid-fire, System Of A Down-esque breakdown on ‘Spit Out Your Teeth’, to the implacable pace of ‘Banished But Blameless’. Overall, Black Moth ramp things up very nicely in preparation for the night’s headliners, exhibiting a brooding, mesmeric intensity throughout their set.

The crowd may be a little sparse tonight, but it’s commendable that Turbowolf perform as if they’re playing to an audience of 5000 regardless of the number of people actually present. The band’s frontman Chris is on particularly animated form, rallying the crowd, lurching wildly around the stage, and hopping over the barrier into the audience at one point. His bandmates are equally relentless – Joe providing meaty bass throughout, Andy’s guitar playing is rarely anything less than frenzied, and Blake plays his drum kit with the force of a battering-ram.

This writer would normally be a little fatigued by the prospect of three heavy rock bands in a row, but Turbowolf keep things interesting by hinting at more psychedelic influences throughout their set – buzzing psych riffs threaten to escape from the musical maelstrom, trippy interludes pepper their songs, and there are even a couple of full-blown, frazzled guitar freakouts. To further pique our curiosity, the band also debut a new song, which starts as some sort of disco-metal workout and ends in superbly sprawling chaos. The other side of the coin, of course, is their monster riffs, and this is arguably where the band really shine – as evidenced by the likes of ‘A Rose For The Crows’ and ‘Read + Write’, which both have brutal, crunching guitars as their central feature.

It’s worth mentioning the pair of covers they play during the set, both of which will feature on a forthcoming EP. Their version of ‘Captain Caveman’ by Lightning Bolt is played pretty much straight – well, as straight as such an utterly bonkers song can be played, anyway. Later on, however, their deranged take on Jefferson Airplane’s ‘Somebody To Love’ proves to be a slice of mad genius, and it’s one of the set’s absolute highlights. It’s impressive that Turbowolf manage to keep up their level of intensity throughout their entire show, and as set-closer ‘Let’s Die’s evil haunted house synths quickly give way to one final, nihilistic blast of ear-shattering rock, one thing is clear – York, you’ve missed out. Again.