Arriving fashionably late, as per usual. After some proper uplifting efforts from Liverpool natives Signed In Crimson, we are treated to an entertaining banter-filled session from Us Amongst The Rest. 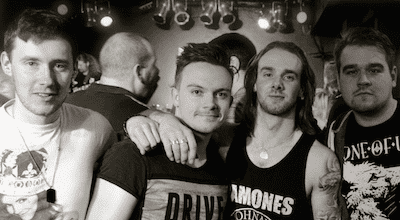 Indeed, this band are on our Ones To Watch list for the rest of 2014 and into 2015. They seem to be contenders for the title of “next big thing” to come out of this area for rock and metal, following in the footsteps of Glamour Of The Kill, RSJ and Asking Alexandria.

The songs on display tonight are true and proper anthems, the musicianship is tight and the band are exceptionally well-dressed. Which is nice. Really, it’s only a matter of time before this band breaks out of Yorkshire and takes over the mainstream rock radio-waves with the power, determination and grit of tracks like ‘Fields Of Fray’. Good times ahead, for Us Amongst The Rest. The band’s album, ‘Follow The Truth’ is coming really soon. Get excited.