American indie rock duo, We Are Scientists, make a triumphant return to Leeds after not playing the city in four years, at the University of Leeds Student’s Union. The band have been touring Europe promoting their fifth studio album, ‘TV En Francais’. 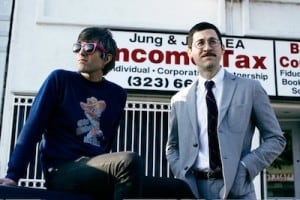 The Saturday night gig kicks off with five-piece Lancashire band, The Heartbreaks, throwing down a catchy and enthusiastic set as the crowd sprinkles into the dimly lit downstairs venue. Clad in sixties mod attire, the band has a unique sound that gets the audience to lace up their dancing shoes. Next up are four-piece Birmingham band, Superfood, who deliver a captivating set as the venue begins to fill for the main event. With a calm and laid-back performance, the crowd is aptly warmed up and prepared for the already entertaining night to continue.

The lights dim and REO Speedwagon’s, ‘Keep On Loving You’, plays through the speakers as We Are Scientists take the stage and start the show with vocalist and guitarist, Keith Murray and bassist, Chris Cain exchanging jokes before playing ‘Return the Favor’ followed by ‘After Hours’ and ‘I Don’t Bite’. The mood for the show is set as Keith and Chris talk with each other between songs like two old friends, inviting the audience behind the scenes of their friendship. The show continues with the ever popular, ‘Nobody Move, Nobody Get Hurt’ as the crowd sings along to every word, bouncing up and down to the catchy tune. Next up is ‘Dumb Luck’, the first single from ‘TV En Francais’ followed up by ‘Rules Don’t Stop’. Between songs Chris drinks from a bottle of red wine and the crowd encourages him to down it, which he does with dignity and class before another bottle is brought on stage for him. The venue is filled with a relaxed, community vibe as all the fans hang on every word sang by Keith and gaze up at the stage in adoration as the show continues with a healthy combination of old and new tracks such as ‘Textbook’ from ‘With Love And Squalor’ and ‘Nice Guys’ from ‘Barbara’.

The laid-back and comedic night continues with Keith and Chris competing in a drinking contest on stage and Chris taking selfies of the band in the crowd. Between chatting with each other on stage and making jokes about playing seven singles in a row, comparing themselves to U2, the band delivers an incredible performance full of familiar bass lines from Chris and rocking solos from Keith. The chemistry between the band on stage seems to leak through the venue to the audience, creating a calm and attentive atmosphere. At one point between songs, Keith is handed an unknown disc from a member of the audience and puts it on his amp after closely examining the item. For their encore, the band comes out asking for a “Yorkshire” chant, which the crowd more than willingly delivers. The encore continues with ‘Can’t Lose’ and finishes with the fast-paced and anthemic ‘The Great Escape’.

We Are Scientists prove that you don’t need gimmicks or costumes to put on a successful show. The band immediately grabs the attention of their audience and refuses to let go for the length of the performance.