First off, if you haven’t done so already, please read the review of TNAs Lockdown tapings at The SSE Wembley Arena on January 30 this year also on this site, it’s perhaps the most deserving prelude for the following review. 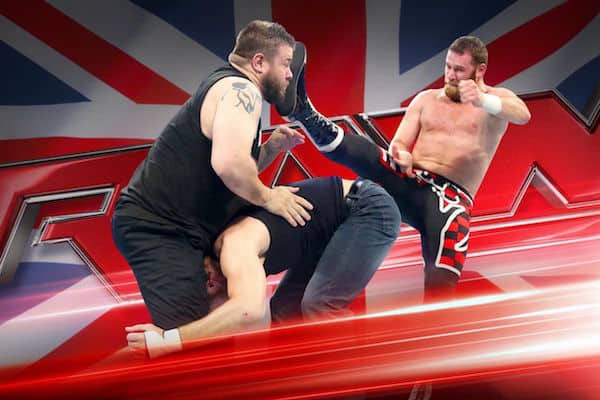 Night and day in terms of quality in comparison to my TNA Lockdown experience. Often said by wrestlers that coming to WWF was like stepping from b n w to colour in Wizard of Oz compared to WCW. The whole event had a very well organised feel to it and on a personal note, my favourite part was not having to leave early to get home because WWE are simply leagues ahead in terms of time management even when they are shooting two flagship shows in a different nation.

I’ve heard Roman Reigns was on the receiving end of 101,000 boos at the climax of WrestleMania at the AT & T Stadium and I believe this now more than ever. In a night where overwhelmingly the faces and so called internet darlings won their matches, it is arguable WWE were running on most levels on autopilot. But when the theoretical baby face of the company and successor to John Cena came out for his short interludes, the chorus of boos from just 16,000 was nearly deafening.

I honestly think Jimmy Saville would have gotten a better crowd response. I can’t say what it is but to me, it’s the exact opposite of why The Shield were a massive success in NXT and WWE, he is being virtually shoved down our throats while we’re told we like him when superstars (in this case, Damien Sandow, Cesaro et al) are more than wasted by just either floating in mid card or on the injured list.
It reminds me of 1996 and later when crowds then would boo the champions of the day for vanilla baby face performances, in that case the now Mr. WrestleMania Shawn Michaels and later, The Rock. In both cases, the situations resolved themselves by giving in to fans and making the characters heels. The same happened to Vince after the little known Montreal Screwjob of 1997 and that lead to the most over feud of the most over period in WWEs history, Austin vs McMahon.

There were a few Smarks around, a few who were drunk from the start were slagging Lilian Garcia off for singing our national anthem. This might just be me, I’m not conservative in any way, but seeing as our anthem is so short, it kinda annoyed me people can’t feel like being respectful for a short time. There were a few mocking Miz for fluffing his lines in his Miz TV segment too, but like the chorus of boos which seems more attached to Roman Reigns than his own shadow, I get the feeling that Kevin Dunn and company will somehow can the audio of this and replace it with something both he and Vince would more agree on.

Overall, a thoroughly enjoyable experience and if you ever can (tickets are expensive for most – although my friend somehow got his groups seats upgraded from his tier to 7 away from ringside for free! Furious) you will do well to spend on tickets to WWE. To paraphrase JBL; ‘Ah loved it!’

Post script: I must say the merch stands were woeful. They were selling more Money in the Bank briefcases than anything else, perhaps even all the t shirts combined too, but one thing they didn’t have? Any Enzo Amore and Big Cass shirts, considering how big that team are becoming, this is indeed a surprising oversight.