The Ruby Lounge Manchester is a nifty little basement venue; Manchester Orchestra managed to sell it out in under one hour. Heading down early to beat the crowds, this writer thought he would be waiting around for a while to have his mind blown by the alternative-indie loud sound of MO, but then, the band were on stage, proving why they would have been worth the wait anyway. The crowd at an MO gig is like no other; there are no 15 year-old mosh-pitting kids at the front, and you won’t be put off by any couples smooching in front of you during the emotional bits… 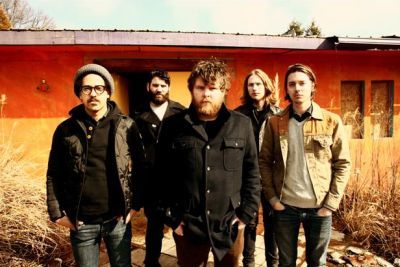 Unfortunately, for the guys looking to pick up girls at rock concerts, what you do get are hoards of twenty-something men, all of which are die-hard MO fans. The combination of an intimate venue with a dedicated fan base is always one for the good books; MO’s performance at the Ruby Lounge is no exception.

There are a few technical failures during the loud and heavy moments of the set, with the bass amp shutting down a few times; however, lead singer Andy Hull covered these moments up expertly and professionally, by doing what he does best, just playing more songs. To someone who isn’t paying quite as much attention, these issues would have looked as if they were all part of the plan; the people that do notice also recognised that even with these problems, it is the best that MO have ever looked and sounded.

Opening with the song ‘Pride’, from the album ‘Mean Everything To Nothing’, is a bit of a strange choice. Not really a fan-favourite, the song has a slower tempo and is not a definite display of where MO go with the rest of their options. Once they are in full swing there is no looking back, performing tracks from all three records (including ‘Simple Math’, coming out next month) with ferocity and flair.

The dynamic changes from quiet to loud and then back again making MO’s sound so exciting, at the Ruby Lounge they were even more dramatic than ever; the band add unexpected twists and turns to the songs, giving the live experience new life. It’s very rare that a room full of hundreds of people will be absolutely silent to listen to a group of men on stage, and it’s even rarer to see fans at a rock ‘n’ roll gig shush others for talking; this happens on quite a few occasions for MO tonight, especially when the tempo drops and Andy Hull takes the centre stage. Hearing ‘Lord, Where Have You Been?’ being chanted over and over by hundreds of fans, is enough to give one goose bumps, and apparently it is enough to bring the band back out on stage for a second “unplanned” encore.

Manchester Orchestra named their band after the northern UK city, and it’s clear the fans who visit here know it and appreciate it. There is a tremendous amount of adoration and respect that comes from the supporters here and it’s clearly reciprocated by the band. One can tell by the attitude they adopt on stage, the fact they run over the curfew by half an hour and the fact they play two hours of songs in total, that MO are in a very good place at the moment; they will be returning back to Manchester soon, and our prediction is it’s going to be even bigger and even better.