We all know at a Fightstar show that your ears will take a beating, your feet will hurt and your throat will be sore but not tonight, MTV presents Fightstar gone acoustic. And yes, just like what they’ve all told you before, it is almost like having the band right there in your own living room, with instruments, chairs and a bunch of people that you don’t know… 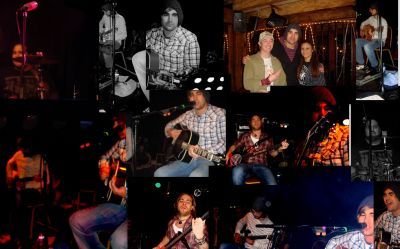 “Why are Fightstar doing an acoustic show?” You ask. Well, because the band are celebrating the release of their deluxe re-issued album ‘Be Human‘ of course. After the supporting acts Lower Than Atlantis and Spy Catcher work hard to warm up the cosy, yet eager crowd, Fightstar appear. Following ‘Palahniuk’s Laughter‘  and ‘The English Way‘, the band kick into ‘Paint Your Target‘ and for this defining tune they are joined on stage by a very special guest on the cello, Audrey Riley. Now, if you’re not familiar with Audrey then chase back to her past credits with Coldplay, Feeder and Muse. Her influence is actually all over Fightstar‘s latest record and specifically on the 24-piece string section arrangements recorded at the infamous Air studios.

This special stripped down set consists of the most emotive new material alongside some of the older, hard-hitting essentials. That being said, one of the most impressive songs on offer tonight is not one of the band’s tracks – we think one of the tunes that really stands out here tonight is the cover of ‘Vincent‘ by Don Mclean. Vocalist Charlie Simpson did a grand job on this – as the song progressed his characteristically raw vocals became softer and more endearing than most will be used to. The band have stated many times that their influences stem from the likes of Deftones and Kurt Cobain, but that they are still open-minded and not afraid to take something and make it their own – this is the perfect example of the group’s diverse musical range.

Of course, it’s always nice to witness the fans sing-a-long, and even for these hardened scribes, within this intimate setting, it provides us with the slightest of tingles. Indeed, there does seem to be this amazing energy in the thick Camden air tonight as Simpson and co. relish this close and personal environment and pour all of themselves into deep, soulful renditions of ‘Waste A Moment‘ and ‘Mercury Summer‘ followed by our standout of the evening, ‘Sleep Well Tonight‘.

It’s never easy for a band renowned for energetic and large-scale live shows to take it down a notch and perform with the same vigour and passion in a much smaller and more intimate venue. But tonight because they definitely manage it, Fightstar prove beyond any possible doubt that they are one of British alt-rock’s biggest and brightest hopes.

The re-issued CD/DVD combo of ‘Be Human‘ is out in stores now and you can check out our interview with Charlie very soon.

Watch the video for ‘Paint Your Target‘ below: