The Easter bank holiday weekend sees the Corporation in Sheffield host the second Resistanz Festival. This event is the creation of Phyll Pearman and Leighton James-Thompson – their objective has been simple – to forge a grand festival line-up with bands and DJs to cover all the sub genres in the modern day industrial music scene, and with a line-up of 15 international bands and 16 DJs over two days there is definitely something for everyone here. In the following review, we select our best bands from the fest, and talk about the venue, accommodation and people of Resistanz 2012. 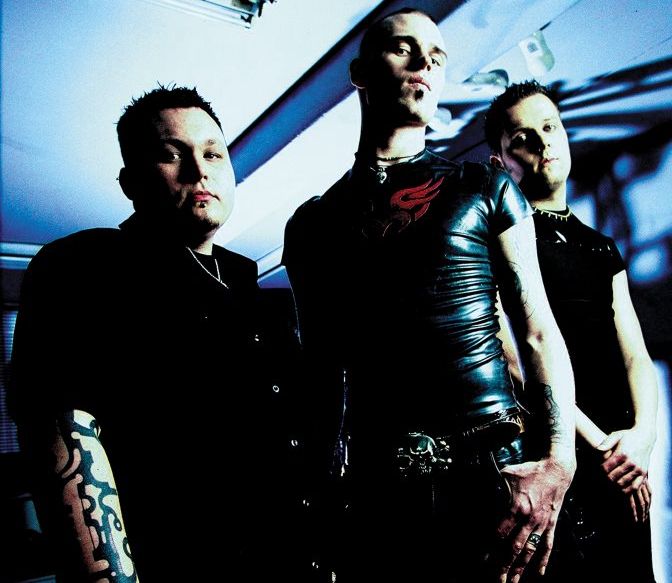 Corp has three rooms – a main room with one sizeable stage, a small room just to the back and a large room upstairs, though that upstairs is only open on Sunday evening after the bands finish. Thankfully (as it can get quite sweaty at these industrial club events… it’s all the PVC), it also has a large outside seating area where smoking (there’s a well-lit space) and eating (stalls) can happen.

Just passed the smoking area is the market entrance. There’s eight stalls in total this year, covering clothing to temporary tattoos. There’s also an official merchandise stall and err… a photo booth too!? One thing to note after speaking with a few people across the weekend; many feel that the large main room is not big enough for the amount of people who attend [it’s nice to be popular though, right? -ed]. after the bands finish, the club rooms open. On the Friday (helping everyone get warmed up) there is two DJ rooms open and playing some proper mega-industro-anthems, with one jockey based in the main room and the other in a small space at the back. Sunday, like we said, sees the main room hosting bands again but on the evening, a third room opens upstairs for DJs. .

Accommodation for this festival is not on site and you have to find your own hotel (book early we would advise) we took residence in the Jury’s Inn (a popular choice for festival attendees, and about five minutes walk from the train station and to the venue). The staff at the hotel deserve a special mention, as they are particularly supportive and very polite. Go team!

This scribe has never been to Resistanz before, but it was lovely to see so many familiar faces and to be talking to people from all over the UK. The ace thing about Resistanz is that it really does bring in crowds from around the world – we meet people from Austria, America and Spain. To say that this event is only in its second year is pretty impressive. Many people we share experiences with have the same opinion, and say that the music isn’t the only thing that they come back for; it’s also for the people they’d met the previous year. Awww!

Mind.In.A.Box is a band we have been looking forward to catching this weekend after seeing them last year at Infest in Bradford. Unfortunately though, the first part of the performance is a little disappointing. Hold on! This is mainly due to challenging technical difficulties and and the painful feedback during the first few songs. Despite this, and like true professionals, MIAB pull together and feed of the crowd’s undeterred energy to produce a strong ending, coming up trumps with their emotionally poignant brand of electronic music.

Straftanz are up next; a band on the rise, we think this duo should be the next big band on the international industrial scene all their performances are phenomenal, they have outstanding stage presence and their songs are memorable without been overtly mainstream like other bands (we can all think of a few names, right?). The two members have a really great dynamic and although the pink hobby horse they carry around everywhere is… a little off-putting, it’s there trademark and people seam to enjoy it [can anyone tell us why the heck it’s there in the first place?].

Ultraviolence are a pure hardcore-industrial act and they sound much better live than on record… no, really. ‘Elektra’ stands out heavily in a well-rounded set of tracks that don’t necessarily seem to fit in with the established Resistanz blueprint, but certainly add to the energetic mood of the weekend overall.

Natchmahr’s Thomas Rainer never fails to give the crowd what they want. However controversial (or not) you might think the band’s imagery is. The beats that they produce are nothing short of fantastic (for this type of crowd… anyway). Paying for a Resistanz ticket is worth it, for this act’s show alone.

FGFC820 create an interesting array of sounds – they mix the more conventional militant aggression music with surprisingly insightful politically-charged tunes. The music is impressive and made even more so in this setting with the addition of Thomas Rainer who joins them on stage for a defiant rendition of ‘Ich Bin Ein Auslander’. We’re going to be blunt again here, but this is another band that really don’t do themselves justice when it comes to recording. Live however, they are spot on.

Most people knew in advance, and we assumed that Icon Of Coil would be the weekend’s highlight. This alternative-electro powerhouse of an unit have really still got it. Andy LaPlegua draws the crowd back towards his softer roots; his energy is infectious tonight, as we find him jumping around the stage with the credible backing beats provided by his bandmates through instantly recognisable songs including ‘Shelter’ and ‘Dead Enough For Life’. All-in-all, this live showcase from one of pure industrial’s most popular acts ends the weekend in fine fashion.