When the queue for a gig at the venue extends far beyond the corner of the local Job Centre, you know the congregation are here to witness someone of great importance. Tonight’s headline act offers significance, and commands reverence, in spades. 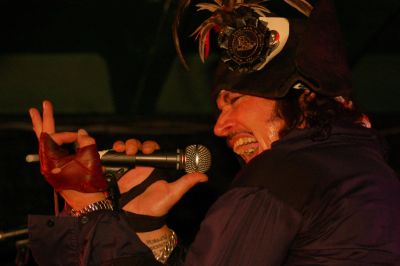 The crowd quickly throngs around the stage once the doors have opened, not just to be captivated by Adam Ant, but also the two impressive support acts. Commencing proceedings are Poussez Posse, a female quartet whose blend of punk-infused rock and confident sexuality is captivating. Two of their four songs are cover versions; ‘Addicted To Love’ more in the style of Ciccone Youth than Robert Palmer, while the guitarist’s powerfully-performed riffs during ‘Only Women Bleed’ match the Alice Cooper original. The Posse round off their set with a rhetorical yet effervescent question about lead singer’s favourite things – “When Was The Last Time You Had Sex?”

More female rock follows with Dressing For Pleasure, who tell us it’s the second time in York in support of Adam Ant. Led by twins Naomi and Alexandria Hewston, the Birmingham trio don’t let the minor technical bugs distract them from delivering an energetic set. They use their time on stage to try out new track ‘Going Nowhere’, while their ode to the night’s main man, ‘Leather For Pleasure’, gets an already-hyped crowd buzzing.

The anticipation continues to build as the main soundcheck gets underway, and after what feels like an eternity, a bassline builds from the stage, followed by drums, rhythm guitar and loud cheers as this evening’s hero takes to the stage. Ant is in great form, dressed in an Admiral Nelson hat adorned with feathers and ‘Prince Charming’ jacket; his black-rimmed glasses making him the cooler older brother of Captain Jack Sparrow.

The set is dominated by tracks from 1978 to 1980 era Adam and the Ants (which it seems the strongest contingent of the crowd have come to revel in), along with a selection of Ant’s solo material; yet the hits are performed to keep the less-than-hardcore fans content. The excitement on the floor is palpable when the bugle intro to ‘Stand and Deliver’ resonates and when beautifully-executed primal screams herald ‘Kings Of The Wild Frontier’. 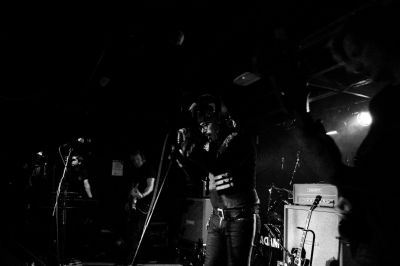 Between ‘Zerox’ and ‘Deutscher Girls’ (which Ant reveals “got [me] into a lot of s**t at the time”), the band are introduced one-by-one, and throughout the night they prove they have a strong handle on the distinctive Antsound. The new arrangements of ‘Prince Charming’ and ‘Goody Two Shoes’ (the number one songs in the UK when this writer and his photographer, respectively, came onto this planet) met with immense approval.

Adam Ant’s second gig in York in the space of a year proves Antmusic’s flavour has remained distinctive and arresting over time and, best of all, he has overcome the past decade to retain his charismatic stage persona with dignity and gravitas. May the Warrior march on for years to come.