So, as you’ll no doubt know if you’ve been reading these pages regularly over the last few months, that we’ve been making strong attempts to be more “cultured” and stuff. So, as part of this new more “cultural” outlook, we ventured to York’s Theatre Royal for the second time in two months to check out ‘Bach With Byte’ – an “experimental” look at the work of this classical music icon (with added Friedrich Dotzauer and rock cellist Aaron Minsky for good measure), interpreted by local multi-instrumentalist and genre-bender Will Standish (and friends). The showcase takes visual images and sees them edited together and set in such away that they perfectly accompany the artists’ intense notes. 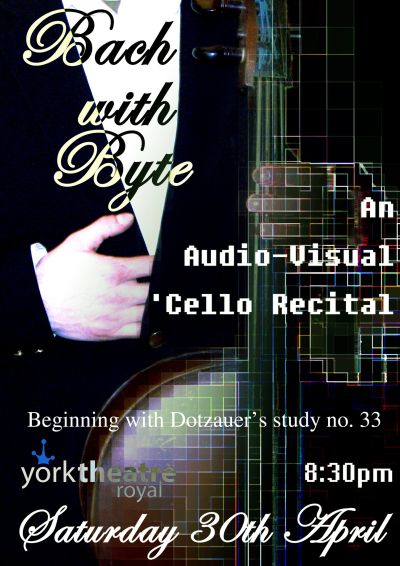 From Standish’s opening solo pieces that interpret Bach’s best work, to the two-piece (Will’s cello and Carl Chilton’s drums) getting together to perform the more alt-rock Minsky-inspired work that closes the event, project mastermind Standish shows a great appreciation for the styles that have inspired him throughout his career in music.

The visuals are very effective and should not be dismissed (Visutal is hard at work behind the screen monitoring them), and we would argue they are equally as important within this great mind-boggling cocktail of audio-visual madness (if nothing else, to involve all types of onlookers and… fans of ‘Star Wars’). Ranging from Disney’s ‘Dumbo’ to the aforementioned Lucas flick, the screen accompanying the sounds serves to add real impact to the delivery of the audio material.

Tonight, Standish and co. put on an event that entertains (and will continue to do so) fans of all styles of music, and in this they prove that the cello really rocks. This showcase is innovative and uplifting; while some of Bach’s work can be described as anything but, the way it is delivered tonight (along with the other parts) within the comfortable setting that is the Theatre Royal’s bar, and the passion and enthusiasm shown creates a really positive vibe that this team can (and should) exploit at all future events.

We can’t give you any links at this time, because this concept is still in its infancy, but we will be sure to keep you updated on more news as we get it.