By darkened-crucifix September 28, 2008 Live
No Comments

We shall dive straight in to the opening of the Boosh live experience which brings with it the return of the popular ‘Future Sailors’ routine from series three; and as you would expect by now, the crowd are lapping it up.

The introduction to the cast follows the fantastic opening, with an introduction to Howard Moon and Vince Noir. As expected there are classic comedy lines; ‘That’s not a moustache, it’s a Bovril smudge’, and the witty banter that loyal Boosh fans have come to expect.

As Bob Fossil enters centre stage he delivers his part of the show with the usual sexually orientated comments and he begins to dance his way back into the audience’s hearts.

The entrance of Naboo and Bollo in the theme of a rap shows the Boosh’s classic style of incorporating every style of music onto their act, however Vince and Howard have to stop Naboo’s rap pretty quickly as they start spinning off crude lyrics. Of course, what Boosh show would be complete without the famous phrase, ‘I’m going to turn my back on you now, let that be a lesson to you’, combined of course with the accompanying music.

Let me tell you there was absolutely no chance that we could escape the high level of audience interaction and witty banter included in this comedy act, you were practically falling over it from laughing.

With the introduction of the moon there were technical difficulties, we could hear the moon but we could not see him, this did not discourage fans though, as they sat avidly waiting for the problem to be sorted and for the show to continue. 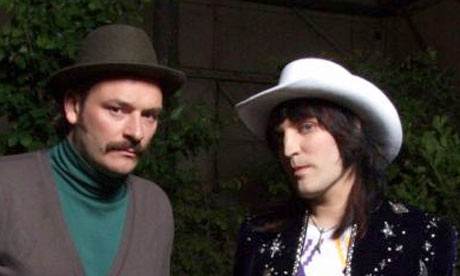 Tony Harrison’s entrance is set up in a chat show form, and provides as much humour as you could want, with the comedy guest talking gibberish into the microphone, the audience are left feeling fulfilled and anxious to see more.

As the crack fox is brought in to raise The Hitcher from the dead, a concert is then performed as the curtains fall to signify the interlude.

As the curtain rises once more to a crowd of screaming fans it marks the beginning of Howard’s devised piece ‘No future’. The general story is about based around one man being left alive when all else has been destroyed, there are however four mutants that are taught how to live by Howard himself. It is around this time that Vince begins rebelling against Howard’s script and stealing the limelight from Howard to himself.

He successfully does this by rewriting only his script, and introducing himself and Bob fossil as two robots from the future, and making the enture devised piece a mockery, in true Boosh style.

Throughout the show, Vince attempts to increase marketing strategies for his company by slipping the name into the general chatter. Vince does this because he is now the face of John Claude Jaquette. He turns Howard’s carefully planned and scripted piece of theatre into one long advert for his company.

With sexual references dotted all over the place, the most important one being the enormous silver tin penis supported by Bob Fossil as a futuristic pleasurebot, make this Boosh tour a lot spicier for the fans, opening up new doors for the ever increasing talent. There are also new crimps, which only build the rapidly growing fan base.

As the curtains fall to signify the end of the show, Eleanor, the man eating widow who has a serious thing for Howard comes out with a bowl of bingo balls. As she reads some out, the balls get thrown into the audience. A twist appears when the ball with the number 666 appears, and the curtains open showing a change of set, to a band layout and Eleanor goes to join the cast all dressed as nana’s to perform the ‘Nanageddon’ number. The end with an encore and ask the crowd if they want more, and as they clearly did, they performed ‘I did a shit’ to a standing ovation and to end the night off with a bang, the band decided to finish off the night with the return of a well known character ‘Charlie’. Every member of the crowd was on their feet for this spectacular finale. I have to say this was the best performance I have ever been to, and The Mighty Boosh really excelled themselves.

The highlight of my night however, has to be when the Boosh beat the crap out of the honey monster for ripping off their crimps on the new advert. This for me, made all the Boosh fans happy and successfully got revenge on the honey monster, purely because his head was mounted on a spike, and then mercifully, made love to by Tony Harrison.

By the end, the Boosh have acquired a standing ovation and the comedy sketch has turned more into a rock concert. Change is sometimes good, and we think the fact that the mighty Boosh are emerging from a comedy act into a comedy act and a band is one that the audience will love! It shows that the Boosh can adapt to suit its audience, and the ability to do this, should take them a lot further, so far that they will eventually conquer the world.