This scribe has never been to a TNA Live Event before, indeed, I have only been a TNA viewer for about three of the 20-odd years I have been a wrestling fan. I have always heard that it is the live event where TNA shines, and on my viewing I would agree! 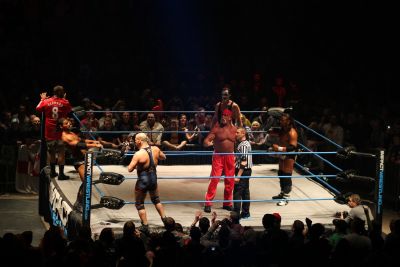 A very eager crowd started queuing early to get in to the Manchester Evening News Arena, and as we joined you could feel the excitement in the venue. TNA is the fastest growing wrestling company viewed in the UK, with figures regularly ahead of both WWE shows, Raw and Smackdown. On the showing of tonight’s event, we can see why! The crowd is filled with a cross-section of people, from grown men in costume to the 7-year-old seated a couple of rows in front of us waving his foam Hulkamania hand.

A major difference between the TNA and WWE live event can be summed up by Jeremy Borash. He is the event host, ring announcer (along with Christy Hemme) and everything in-between. It is he who fills the gap between matches, hyping the crowd up with backstage passes. When it was time for the action to start, the enthusiastic crowd was rewarded with a very fast-paced, fun X-Division match between the Champion Austin Aries, the recently returned Alex Shelley and the hometown hero Mark Haskins; some beautiful “heel” (bad guy) work by Aries for the win over Haskins.

In another highlight, Earl Hebner (referee) removed his stripes to reveal a striped shirt featuring the slogan “Damn Right I did it” in reference to his “screwing” of Bret Hart for WWE years ago in his match with wrestling legend Shawn Michaels. Hebner then put on shades and strutted around the ring. Very odd indeed! Another local hero comes out to a massive cheer next, as Doug Williams took on the undefeated Crimson. This was a very good back and forth match with both guys trading shots before a Red Sky powerbomb from Crimson scored the unpopular win.

The crowd were really into the show, with loud chanting all night, which stepped up a gear with the arrival of Gunner, who got some major heat (boos).  Meanwhile, the Loudest crowd noise of the night came for his opponent, the high-flying former World Champion AJ Styles. AJ pulled out the win after some spectacular aerial moves, including a flying forearm from the security barrier. Time then, for a change of pace, as we got Knockout (TNA’s women) tag team action from the champions Madison Rayne and Gail Kim against strong crowd favourites Mickie James and Tara. Teenage boys (and those of us a little older) got a treat as Mickie and Tara got the win, and then shared a smooch. 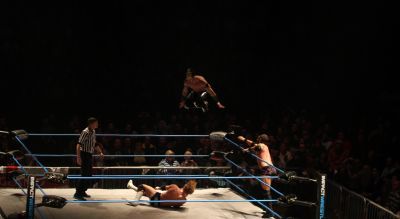 After the intermission, we were privy to a TV taping, for TNA’s second show Xplosion (which will air this coming Wednesday on Challenge TV) as heavy crowd favourite Samoa Joe challenged Bobby Roode for the TNA World Heavyweight Championship. Roode is really growing into his title reign and more matches like this can only solidify that, the best match of the night by far saw Samoa Joe in a playful mood, making obscene (and yet, very British) hand gestures at Roode in advance. The crowd really popped (cheered) when Joe hit a tope (headfirst dive) through the ropes onto Roode on the outside. Roode hit a low blow and fisherman’s suplex for the win.

One of the major differences between TNA and other wrestling companies is Dixie Carter. She is the President of the company, and is on tour with them; she tweets with fans and attends almost every show. On this occasion she came out to thank us for attending, and pointed out an old lady in the crowd who has been a Youtube star after fighting off some muggers.

Dixie promised to “come back when it is sunny”, a claim she may never be able to live up to, given that the show was in a drenched Manchester. Borash had been sending people backstage by heading out to the crowd and picking loud members of the audience but I imagine they were back in their seats in time for the main event. Scheduled to be a tag match, Cowboy James Storm teamed with another returning legend, Sting, against Olympic Gold Medal winner Kurt Angle and the best bad man in the business Bully Ray. Bully turned the hostile crowd against him even more by mocking both Manchester football clubs and removing his shirt to reveal a Liverpool football shirt. It is indeed a nice touch to see an American company use football well, take note WWE (who always mispronounce, or misunderstand our rivalries).

Bobby Roode interrupted to make it a 3-on-2 match until Sting revealed that they had a partner organised…Hulk Hogan. Coming out to the un-familiar fanfare of ‘Eye Of The Tiger’ Hogan posed and postured and did all his trademark gestures playing to the crowd massively. The match itself was nothing too unexpected, James Storm did most of the work for his aging team and came out of the match looking like a bigger star than he is, Sting got in a few shots and Hogan did his trademark finish before Storm got the pin. Some nice interaction with the aforementioned old lady came here as well, as she handed Hogan her walking stick to beat Bully Ray with and got the crowd on their feet. Some posing from Sting, Storm and Hogan sent the crowd home happy. A large section of the fans were there to see the legendary Hulk Hogan in the UK for the first time in nearly 20 years. Despite being barely able to walk, the man is still a massive star and he still controls a crowd like no other. 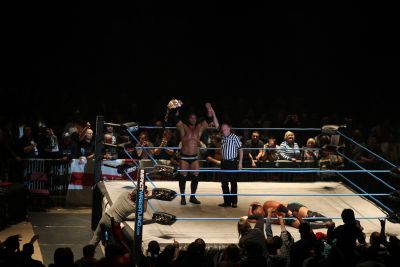 A great night of family (more or less) entertainment means we can only see TNA expanding their fanbase before the return next year. Tickets for that go on-sale Monday, January 30 for TNA IMPACT WRESTLING from www.gigsandtours.com / 0844 811 0051 or www.ticketmaster.co.uk / 0844 826 2826.

TNA IMPACT airs every Sunday night on Challenge TV, which can be found on Freeview channel 46, Sky channel 125 and Virgin Media channel 139.