At the 2011 Coachella Festival, Interpol debuted their dynamic collaboration with filmmaker David Lynch: an overlay of Lynch’s frantic short film I Touch a Red Button Man with the group’s ferocious 2010 single ‘Lights’. The result, a captivating balance of unnerving and sublime, was a singular experience for the lucky few in attendance. 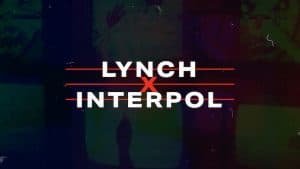 The exclusive piece of work now returns in a new shape for the present day as Interpol have collaborated with HIFI Labs for a limited series of eight NFTs which fans have the chance to own. In the Lynch X Interpol project, newly recorded versions of ‘Lights’ join Lynch’s engrossing animations to both commemorate and add new power to their famed original effort. The NFT collaboration is available at https://lynchxinterpol.tv/.

“The new performances are stripped-down renditions featuring [Interpol lead guitarist] Daniel Kessler on piano,” says frontman Paul Banks. In fact, these more acoustic takes may be Interpol at their most poignant, digging deep to take each clip to new artistic heights.

Eager to include the fans in unique ways, Lynch X Interpol also offers opportunities for collaboration. “In the spirit of fandom,” Banks continues, “we are glad to reveal that one of the eight NFTs will go to fans—for free.” Fans will be able to add their personal creative touch to one of the NFTs in the 3D gallery and one lucky participant will take home the collaborative NFT.

“What makes us so excited about this release is it memorializes the collaboration between David Lynch and Interpol,” adds Jack Spallone, Head of Crypto & Product at HIFI Labs. “Using Ethereum, these NFTs can live in eternity as artefacts of cinematic and musical history. Just as David Lynch’s career helped push the boundaries of film and even fiction, it is now extending into the permanent universe of blockchain.”

The release continues the mutual creative respect Interpol and Lynch have for one another. “To be frank, Interpol is crazy about David Lynch, and we are over the moon to have ever been able to align our name with his in an artistic forum,” continues Banks. “Humbly, we believe that as digital artifacts go, these are worthy of preservation in the infinite digital realm.”

Just as important to all parties as the quality of the art is being conscientious about its execution. “We are pleased to enter the NFT space in as ethical a manner as we could, in conjunction with Aerial,” Banks continues, pointing to the platform’s tools for offsetting carbon footprints as key in the decision to use them for this project. “We hope to bring an artful and interactive approach to this launch.”

“We are overjoyed to announce Flood & Moulder will be producing and mixing the next Interpol record,” Daniel Kessler said. “We are longtime admirers of their work and delighted to be in the studio with them. Starting this party right.”

The band have already announced 2022 shows at the Rose Bowl in LA headlining Just Like Heaven, Mexico City’s Palacio De Los Deportes, as well as one of the headliners at Primavera Sound in Barcelona.