2016 is shaping up to be a pretty good year for Chester-based band Campfire Social. After taking the city’s summer festivals by storm, the band are getting ready to release their exciting new single Nothing Nowhere Never Now on November 11. 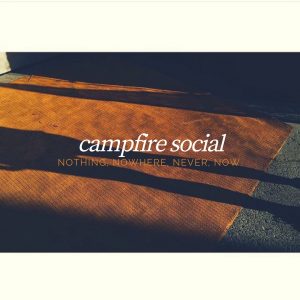 If you don’t already know, Campfire Social are a five-piece band who originate from Llangollen and Chester. The band’s quirky alternative-folk sound has seen them gain recognition around Chester and on BBC Radio Wales.

The band’s new track Nothing Nowhere Never Now is a combination of the indie pop/rock sounds of Two Door Cinema Club meets the folk sound of Of Monsters and Men, but at the same time however boasts the band’s own unique style.

If you have heard some of Campfire Social’s earlier material, you’ll notice that this new track is a bit heavier. The repeated guitar riffs add a rockier element to the sound, but avoids overshadowing the band’s alternative folk style.

The first time I saw the band was at Flipside Radio’s Seeds Festival this year, and one thing that undoubtedly stood out was the band’s gifted vocal harmonies. Naturally, these strong vocal abilities are displayed in Nothing Nowhere Never No, which puts the Campfire Social stamp on the track. 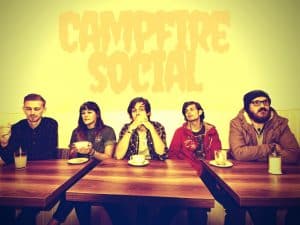 Campfire Social have a wonderful rare quality of being able to produce a light-hearted folk sound, but at the same time evoke different emotions. The single Nothing Nowhere Never Now, ultimately does this. The upbeat tone is juxtaposed with the track’s lyrics: ‘Now all my favourite people are the people I know nothing about,’ which adds a great rawness to the song.

When it comes to a first single it’s quite hard to strike a balance between being actually good and not showing that you’re trying too hard to be good. Campfire Social however, have avoided the ‘first single curse’ and have produced a great song which successfully portrays their musical talents in their own unique way. They do this by creating what initially appears a simple light-hearted tune, but is actually a complex sound.

This Friday the band will be launching their new single at Telford’s Warehouse in Chester, with Alx Green supporting. Doors at 7pm.