Portland, Maine trio Weakened Friends today share the final single from their forthcoming album Quitter, out this Friday November 19th via Big Scary Monsters and Don Giovanni Records. ‘Everything is Better’ is out now with an accompanying video. 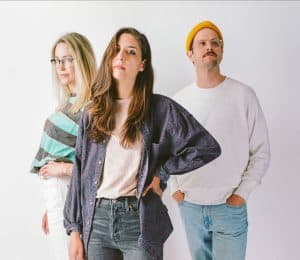 Anyone who’s experienced a particularly rough breakup knows the feeling of being made to be the villain. On ‘Everything is Better’ Weakened Friends accept and lean into that role, singing “you say I don’t care, so I won’t care”. The falling out described on this track is platonic, not romantic, but the repeated assurance that “everything is better when you’re not around,” is a brutal takedown of a hook that shows friend breakups can be just as harsh, if not worse.

Weakened Friends dive into the honest truth of being a working musician on their new LP, Quitter, reflecting on lost friendships and self-worth swallowed up by burnout. Songwriter, guitarist, and vocalist Sonia Sturino is supported by Annie Hoffman (bass/vocals) and Adam Hand (drums) – the album encapsulates a mature take on emotionally driven alternative indie.

Central to the record thematically is the empty threat of quitting music and “getting a real job”. Sturino wrestles with her relationship with music on the title track, shouting “I love it, but it never really feels okay” over scorching guitars. Despite the implications of the title, quitting is not an option for the band.  Even as friends settle into adulthood, Weakened Friends find themselves trapped in a fortress of their own creation, inseparably attached to the eternal youthfulness of life in music. In this liminal zone, life passes by and friendships are weakened, and Quitter takes plenty of time to mourn these losses.

Though the record acknowledges a perpetual state of arrested development that comes with being a musician, the band is anything but stagnant musically.  Opening themselves up to ideas outside the constraints of their slacker rock sound, Weakened Friends puts the full force of their creative ambition into “Quitter”. Inspired by watching peers go above and beyond what is expected of them, the band sought to explore each song’s fullest potential, with their most extensive pre-production and arrangement work to date. Incorporating banjo, pedal steel, horns, extensive synth arrangement and several non-instrumental sounds such as ovens and camera flashes, Weakened Friends expand on their universe of sounds on their new LP.

Quitter will be released on November 19, 2021. It is available for pre-order. The title track is available now across all streaming platforms and Bandcamp.