What did Darth Vader say to Luke Skywalker? “Metaphors be with you.” Poetry, we have occasionally been told (by nuttier than walnut-whip nutjobs) is the new rock ‘n’ roll, and while the biased few of us fellow scribblers of verse may wish this to be true, it’s seldom as glamorous as all that. However, in spite of the lack of groupies, private jets, and monetary reward of any kind, it is true to say that poetry (particularly of the performance variety) is thriving. 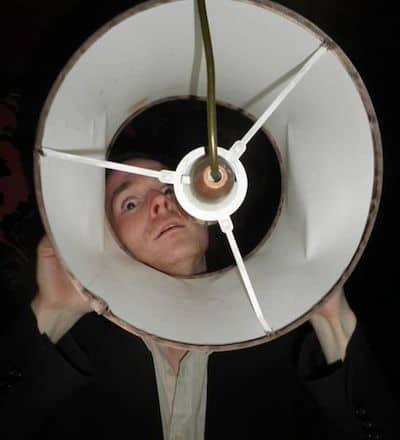 We sat down with Salford’s own man of letters, and die-hard metal fan, Kieren King to find out what it is that keeps him rooted in the world of spoken word and performance waffle. Tentatively we began by asking the self-professed heathen and anarchist what he was up to at present. Clearly knackered, Kieren says: “I’ve just finished moving house. Didn’t realise that I had so much cr**!” As we all know things can build up like the bustle inside an artist’s head [cracking segue there, Steve] and we were keen to know if there was anything in particular that inspired Kieren to write, to get those thoughts out into the open.

“My girlfriend she won’t let me stop,” he laughs. “I just find things that make me angry make good material, especially if I can poke fun at them instead of going off on a rant!” One of the most striking things about watching Kieren perform, on a personal level at least, is the clear influence that music has over a substantial portion of his work. As a magazine predominantly focused upon music, we wondered just how important music is in King’s life. “It’s vital,” he begins openly. “When I’m sad the right song can really pick me up. When I’m angry I turn up Stampin’ Ground to eleven and scream it out. There are very few people who don’t love a dance around their room in their underwear to a few guilty pleasures every now and then.”

Quickly trying to erase that image from our minds (although feel free to dwell if you wish dear reader) we pushed on to enquire about the crossover between music and poetry. Particularly in Kieren’s own work, where does the music fit in? “I think if you look at people like Gil Scott heron, Leonard Cohen and more recently Saul Williams, Kate Tempest and Scroobius Pip the potential for crossover is vast. I mean there are great lyricists like Dylan and Waits or even Chuck D who are poetic in what they are saying. I’d love to be able to have some of my stuff put to music.”

After such a hefty name drop reply it seemed only right to find out who the co-host of Bang Said the Gun considered to be his greatest influences. “Poetry wise it started out as Saul Williams and Benjamin Zephaniah but now I’d say it would be the poets around me that I interact with the most. Gerry Potter, Rosie Garland, Dominic Berry, Ben Mellor and Tony Walsh have all influenced how I write now. I’ll usually whack on some Elvis Costello, Tom waits or a decent hip hop album when I’m gearing up to write.”

It’s obvious from Kieren’s response that the Northern poetry scene is of huge importance to him. “Yeah there are some great young poets around greater Manchester,” he says. “But I see big things for Zach Roddis and Tom Kwei, both for different reasons. Zach is already a great poet and he is only going to get better and Tom just owns any stage he is put on. Great lads.” When it comes to influences, it’s important to pause to acknowledge Kieren’s own father. A poet himself, we were curious to find out if his father’s passion for the word had influenced him at all.“Massively,” he says emphatically. “He took me kicking and screaming to see John Cooper Clarke when I was about 15 and had no interest in poetry at all. I was blown away – doubt I’d have picked up a pen at all if it wasn’t for that, I’ve got my dad’s old notebook now and I perform some of his every now and then.”

So it seems we have much to thank Mr King Senior for then. There have been a great many attempts at defining the art form we know as poetry, from Houseman’s “I could no more define poetry than a terrier could a rat”, or Nicanor Parra’s open “in poetry anything is permitted with only this exception: you must improve on the blank page”, so we thought it only right to give this young whippersnapper a chance to give us his definition: “Poetry for me gives anyone a way to express themselves and their views on life – and I really mean that. I think that anyone can do this – you don’t need any special skills, you just need to be able to think for yourself. The more you write the better you get.” Unlike those aforementioned poetificators, Kieren is very much known as a performance poet, so we wanted to know what it was about live performance that attracted him so fervently.

“I love the interaction with the crowd,” he says. “And I guess that when a gig goes well it’s a massive ego boost. I did a gig in a pub after a Man Utd v Chelsea match. As soon as I walked onstage I heard “wa**er”, when I walked off stage they were all buying me drinks. It’s a rush. Performance is, of course, a dangerous emotional position to push oneself into, and the bad experiences from performing can become interesting fodder for an artist such as Kieren: “I’ve got a poem called ‘I’m Not A Racist but…’. That takes the piss out of casual pub racism and I think the guy who came up to me had missed the intro to that one because he was asking if I really voted BNP.”

As well as building a deserved reputation as a sought-after performer, King is also something of a workaholic and, in addition to the previously noted Bang Said The Gun, he is also the founder of one  of the most popular spoken word shows currently running in the North. We asked him to tell us more about his newest baby: Evidently. “Yeah it’s a night that I run in Salford.” He starts with the enthusiasm for this project dripping out of him. “We film every night and put it in our YouTube channel. We noticed that when we said that we did poetry a lot of people got flashbacks to school and switched off. We figured that instead of telling people that poetry can be entertaining we’d show them – poetry may not be everyone’s cup of tea but no one listened to One Direction once, and then decided that they didn’t like any music at all.”

Kieren may be a young man, but his achievements so far render him an extremely experienced head on the scene, so we asked him for any tip he could pass on to new poets, writers, or performers. “Keep at it,” he starts matter-of-factly. “And not just the writing, keep submitting to journals and festivals. Keep competing in competitions and slams and don’t be put off when it doesn’t go your way. Because a lot of the time it won’t, but when it does you’ll feel amazing. And listen to the writers and poets in your area – they know what they are talking about.”

So what does 2014 have in store for Kieren King? “Well,” Kieren begins with the sense of one taking a deep intake of breath. “Evidently is our baby and it’ll be nice to see her grow. Hopefully I’ll be doing a few more festivals this year and maybe a bit on telly – but I’m not allowed to say which show yet.” Leaving us on that cryptic note (although my money’s on ‘How to Look Good Naked’) we couldn’t let the affable poet leave without querying what was currently lighting up his earballs. “Louis Barabbas & the Bedlam Six are amazing, Felix Hagan and the Family are always playing in the car. I’ve got a bit of a thing for Dillinger Escape Plan and the Cancer Bats as well for moshing around the house doing the cleaning – it gets done faster that way!”