By Dom Smith February 12, 2015 Artist, Spotlight
One Comment
Here’s our next artist spotlight on Pictureplane – in it, we speak to Travis Egedy about his work. 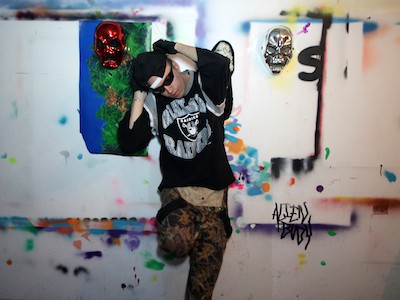 S] Talk about the label “techno-punk”, and what it means to you?

T] “If you look back over the history of rave, hardcore, jungle, and techno it has a very fiery and anarchistic spirit about freedom and liberation and creating your own reality and environments. punk and techno are two rebellious youth movements one in the same. And I’m deeply inspired by both.”

S] What experiences inspired the upbeat melodies of ‘Hyper Real’?

T] “That song actually started out as a beat I was making for a side project I was working in called Dickpic with my good friend, DJ Dog Dick. But it was way too happy sounding and we never did anything with it, so I transformed it in to a Pictureplane pop song. And I was also listening to a lot of Moby. I wanted to make a song that sounded like something off of ‘Play’.”

S] How do you look back on the success of tracks like ‘Goth Star’ now?

T] “That song has meant a lot of things to a lot of people! And it really did start the witch house movement and my musical career, So I’m really happy about that song. It was a special time in my life when I made that song. I love that song, And I play it at every show.”

S] How have your goals with Pictureplane changed and developed over your career?

T] “My goals have really stayed the same. I want to reach people and to elevate spirits. I want to play music and have fun and to experience the world and culture. I want to be a positive force and I want to inspire others to feel the same. It’s about love.”

S] How do you feel about your place in the electronic music scene on a global scale now, in 2015?

T] “I really don’t know. My music is unique and sounds really different to what is really big right now, and that kind of gives me anxiety. But I stand by my music and art. The grass is always greener somewhere else, but I am blessed to be able to be doing what I am doing.”

S] Given your punk background and tastes, would you ever do a live-band version of Pictureplane?

T] “I’m not sure. I wouldn’t do Pictureplane with live drums I know that. It would change the whole sound. I’ve been more open to collaborating recently, so who knows. So far, Pictureplane has been a very solo project for me. It’s just something I have to do.”

S] What bands or artists are influencing you right now?

T] “I’m influenced always by a lot of rap music. And I think American underground rap music is really going through a real Renaissance right now.  All of the Awful Records shit, Father and Slug Christ. Denzel Curry and Yung Simmie, OG Maco – so many. I have also been influenced a lot by all the new UK grime producers. Dark0, Marlo;  all of that shit I love right now.”

T] “I want to tour a lot and play a lot of shows! And I am releasing my full length album ‘Technomancer’ this summer!”