In our busy and wet day at Slam Dunk Leeds we got the chance to talk with up and coming pop-punk singer songwriter Rob Lynch about his influences, his upcoming album ‘All These Nights In Bars Will Somehow Save My Soul’ and his future plans. 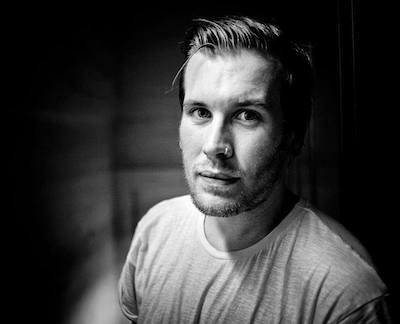 S] How has you day at Slam Dunk been so far?

S] Being from London what do you think of the north?

R] “I used to go to uni in Leeds. I love it here. It’s weird coming back now. I swear this room we’re in now used to be a bookshop where I got my uni books from, so it’s all a bit odd. But I like it up North. It’s cheaper.”

Your debut full length, ‘All These Nights in Bars Will Somehow Save My Soul’ has had really great reception so far. How has the experience been for you?

R] “It’s been great. The album’s out in Germany and Switzerland so the reviews have been great from there. But it’s not actually out yet here until later in the year. So it’s weird because we’re trying to keep it from bleeding over into the English reviews. It’s a weird one, but knowing that people elsewhere like it and the reviews are cool, it’s like ‘hopefully that’ll translate well over here’. Rather than it all coming out at the same time and wondering if people will like it. But it’s been great. It’s been a work in progress for so long so to actually have it out somewhere and know people like it, it’s a relief.”

S] You went to Philadelphia to do your album and worked with Shane Henderson (Valencia, Promise Of Redemption) and then back to London to work with Sam Duckworth (Get Cape. Wear Cape. Fly.). How was the collaboration experience?

R] “It was cool. The original plan was to go and do it with Shane. So I went over to Florida to play in 2012 and then flew across to Philly and recorded with Shane and Trevor (Leonard) who was also in Valencia and we got some bits and bobs done. We got some structures for songs down, but it wasn’t done as is the case with recording. We couldn’t fit it into two weeks. So came back, did some bits and bobs with some other friends up north and Sam Duckworth’s a friend of mine so I played him a song and he was like ‘dude, I really like this. Let’s do some stuff’. Then we went and re-recorded a lot of it and spent two months doing it in the summer. And the output of the Philadelphia sessions with the stuff up north, it all came together to be the album. It’s all kind of disjointed on paper, but actually it worked out really well.”

S] You have a really unique sound that combines pop-punk with other genres. What are some of your influences musically?

R] “I was brought up on Bob Marley. I remember being a kid and dancing around the room listening to Bob Marley and Fleetwood Mac. As I got a bit older it was more pop-punk like Blink 182 and all the bands that came with that. New Found Glory and Dashboard Confessional. That took me into the more acoustic roots and then I got into people like Elliott Smith, then (Bruce) Springsteen. So I think you can hear that in the record, the combination of pop-punk stuff that I grew up on and then what I’m into now.”

S] Who are you looking forward to seeing play today?

R] “I Am the Avalanche. Vinnie (Caruana) later on. Letlive. Oh and You, Me and Everyone We Know. I met Ben in New York in a bar like five years ago. It’s so random, we’re now playing together on the same stage and we remember each other as well. Those are the four that I’m pumped about though.”

S] If you could play with any musician in history, who would it be?

R] “Probably Bob Marley or Springsteen. Maybe together at like a festival. How great would those vibes be? You’ve got Marley’s crew, you’ve got the Springsteen diehards. Everyone would just be super chilled and super-pumped.”

R] “I’m pretty much on tour for the rest of my life now. And then the record will come out and I’ll do some stuff for that, and then I’ll still be on tour. In the immediate future I go on Warped Tour in the states in two weeks for two months, come back have a week off and then crack on again.”