It seems the season of the singer-songwriter is upon us once again, with troubadours taking up their guitars and cutting their lonely paths across venues throughout the country. We got the chance to chat to one of the youngest and brightest of Yorkshire’s latest crop of would be minstrels. Here to discuss a family legacy of music, the balance of school and performing, and a new album ‘FINDING STEVIE’, it’s Stevie Mould. 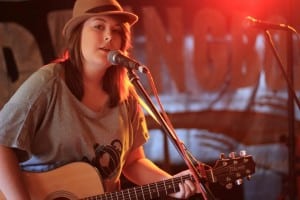 With the diminutive brunette safely sat down with a drink (a soft one of course for the 17 year old, we’re not monsters), we wonder what Stevie is up to at the moment?

“I’m currently at college,” she beams. “It’s my first day back after summer. I’m studying psychology, music and music technology. I want to hopefully go to Derby University to do creative expressive therapies, to one day become a music therapist. I also have a few gigs coming up such as festivals, pub gigs and private functions.”

It’s obvious talking to Stevie, that her years belie a mature head on those shoulders, and it’s a maturity that you can witness in her music as well. We were curious how long she has been playing the guitar.

“I first started playing guitar about four years ago now,” she begins, the infectious (and not entirely mischief free smile still on her face). “I taught myself by using books and YouTube. I had a cheap Argos guitar that was way too big for me, but I stuck with it and seemed to just pick it up. About 6 months ago I started taking guitar lesson as I wasn’t sure of what else to teach myself. I also need to be at a certain grade (5/6) for university. I took my grade three last month and got a Distinction.”

But guitar-playing is not the only skill in Stevie’s arsenal. Anyone who has had the privilege of seeing Stevie perform live will attest to the astonishing range, and soulful sound of her voice.

“I haven’t ever taken singing lessons,” she says astonishingly. “I never thought I was any good at it until about 5 years ago when i started singing at school. I went to Creative Voice in Hull, and I started singing there and got my first gig at the Freedom Festival four years ago.”

Stevie Mould possesses a powerful set of pipes for sure, but it’s also a unique voice that one doesn’t see coming when glancing at the pixie-esque young woman. Stevie tells us about her influences and there is a definite country theme to the artists that inspire her the most.

“My main influences in music I would say are Dolly Parton (it seems like every song she writes is a hit, she write about the simplest things but makes it sound so brilliant), Tracy Chapman (her song writing, in my opinion, is out of this world, many people know only a few of her songs but she really has a great collection of songs), Brandi Carlile, and Nanci Griffith.” She pauses before finishing with a dip of her cap to one of York’s own. “One of my biggest musical influences and someone who gave me the inspiration and motivation to keep doing this, has to be Edwina Hayes who is a great role model of mine but also a dear friend.”

You can sense the enthusiasm and deep respect for other female singer-songwriters that Stevie has, and it turns out that she has something of a heritage when it comes to music in the blood, as she explains:

“My great grandma on my Dad’s side was a phenomenal pianist. She taught herself to play at the age of only 5 and could listen to a piece of music and then play it back to you. Her husband ( my great Granddad) was a compere in the pubs and clubs. My Nan also used to sing when she was a teen. My cousin Louisa is an Opera singer who went to Italy for training and my cousin Laura is an actress who also has a great voice. She has been in plays and musicals but most recently played a part in Coronation Street as Jane Henshaw. We always laugh and say that the talent skipped a generation!”

With an album out and a fast-growing and devoted following, we were curious to find out how she would categorise her own music.

“I would describe my sound as acoustic country/folk” she says with the certainty of someone who’s been asked this before. “I think people should listen to me because I’m honest with my song writing and all my songs are from true experiences. Even the covers I sing have a reason behind why I am singing them. The song I am most proud of is, ‘New Orleans’. I had been through a hard few years and when writing it, it was as if I had really realised who I was meant to be. It was a way of writing about the things that had gone on in a metaphorical way (I know what the song really means but it could mean something different to other listeners).”

Stevie Mould may be young but she already has many years of performing and experience under her belt. She offers a few words of advice for other beginning performers out there:

“I say no matter what, be yourself,” she begins openly. “Sing songs because you like them, write songs because you like to write them. It’s so hard nowadays to not change for other people. You will get people who you don’t like your music but for every 1 or 2 people, you get 10 who do. Not everyone is going to like you but as long as you enjoy it then it really shouldn’t matter.”

Stevie Mould leaves us with a look at what the remainder of 2014 and the future will have in store for her.

“The rest of the year for me is just to keep doing what I do. More gigs mostly. My ambitions for 2015? Well I’ll be 18 in January and I’ll hopefully be going to University so things are going to be changing. I think the main thing for 2015 is getting into Uni. I have never been the smartest or cleverest kid and I always thought that Uni was for the best of the best, but I have realised if I work hard I can do it, so that’s what I am doing. I have always wanted to do music therapy so I have to start somewhere.”

And with that we wave farewell to the entirely adorable, and talented Stevie Mould, a mature head on young shoulders with a bright future ahead.