98Pages have long been hailed as one of York’s standout acts both live and on record. Their tasteful mix of garage and classic rock influences make them almost irresistable to any rocker’s ear. We catch-up with guitarist and vocalist Martyn Fillingham at Montey’s Rock Cafe to chat about the band’s plans for 2011… 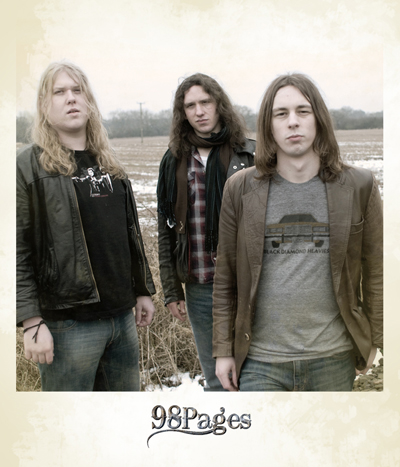 S] Tell us about your history and how you got started?

M] “It all started off with myself and Andy [Black, drums] just jamming together, writing songs and learning our instruments together from when we were about 13-years-old. So, we have been working on stuff for around ten years. We are still best friends. We had the idea to become 98Pages a long time ago, but we didn’t start gigging as a band until 2006. We built up a fanbase and then we produced our first album, ‘Broken Homes And The Halfway House’ in 2009 – then we spent a little while promoting that. We didn’t play so much towards the end of last year, because we have really been focused on writing.”

S] How is your latest material going to represent your progression away from the début?

M] “There are a lot of differences! It’s difficult to describe for me, but we have expanded. I don’t think it has been intentional, but the heavier stuff is a lot harder and the quieter stuff is much more intense, dark and moody. We’ve got so many tunes, and we are not really sure how we want to release them. We’re don’t know whether we want to do three separate EPs that showcase the different sounds that we have – the intense, more ambient material, the standard 98Pages-style, and then this much heavier music, or to release one, very varied album.”

S] What did you learn from making that first record?

M] “To be honest, we just got to a point where we thought it was time to release a record. We took two weeks in the studio and recorded everything. We have always disliked how bands tend to procrastinate and mess about when it comes to recording an album, and we were starting to do that, so getting into the studio and doing it was good for us. Doing all of the recording in Leeds taught us a lot – learning about PRS [Performing Right Society], mastering and printing, because we did all of that through Sony and had to have everything sorted officially before sending it off, put us in ‘at the deep end’ and made us understand a lot more about ‘the industry’. Before that, we were just about writing songs.”

S] Comparisons to Jet and Audioslave get thrown around a lot when you perform, how do you feel about those?

M] “It’s always good to be seen as similar to such great bands, but wherever we go we get compared to different artists. As long as people are happy, then we are.”

S] Do you have a song that you think defines the band’s sound?

M] “I think that ‘Goodbye JoJo’ is the best tune on our album, really. We write so many wide-reaching songs, but when I think of a ‘classic’ 98Pages track, then I would say that one is it.”

S] Is there a song that means the most to you as a band?

M] “I like people to take my lyrics how they hear them, but ‘Help Yourself’ from the first album resonates with all of us. Each of us has had some bad stuff happen and the track is about taking ourselves away from that.”

S] Is there a song that you feel like defines the band right now?

M] “It’s a work in progress. There’s a track called ‘Get Out’ – the music I really like. It’s got one of the best riffs we have ever written and one of the best vocal-lines as well – it is really varied – it’s ‘snappy’ but there are also some darker elements in it as well.”

S] How will the new material expand on 98Pages previous work?

M] “I think that we are a lot older and wiser now. I don’t think that we could have done another ‘Broken Homes And The Halfway House’ and been happy with it because I would like to progress. I think that this new material is the best we have ever written. I am finding stuff now that makes me excited and that I think is really clever. At the end of the day, if nobody wants to listen to us, then at least we still have the love of our own music. If we don’t love it, why make it?”

S] Tell me about the writing process – where do you take inspiration from?

M] “Music has been my life for as long as I can remember. I started making music at 13, and decided that I wanted to do it at 15-years-old. Everything influences me – everything in my life makes me think about writing. All three of us love music and listen to as many different bands as possible. We are music geeks! Sometimes it can be the back-story of a band that influences us, because that can be just as inspiring when it comes to making music.”

S] What do you prefer about live performance in contrast to working in the studio?

M] “Live, you’ve got the crowd and it’s all about ‘caning out’ the tunes. Even in the studio we were just trying to capture that live sound so that we could put it on a record. You can’t always be seen live as a band, because CD, vinyl and MP3 is so much more accessible, so that’s the main reason we wanted to capture that. We are a live band really – our songs always change until they are on record and only then is it finalised.”

S] What are the biggest challenges that you face as a band coming out of York?

M] “I think that because York is such a small city, it’s a struggle in itself, just with numbers of people able to come to gigs. There is only a percentage of people who are really into rock music, so that can be a bit of an issue. I think that this point is a good and a bad one at the same time – there are loads of really great musicians in York – artists, songwriters and bands, that range all genres. It’s a vibrant city of culture, but with it being so small it can be a struggle – there’s so many good things to see and not so many people to watch them.”

M] “Our next single is probably going to be ‘Straight To Hell’ because that is a really fan favourite. People are always asking about that track! We definitely want an album or at least two EPs out by Summer. Also, I think we have a more realistic view on things whereas before it was just like, ‘we’ll gig everywhere and write all the time’. We have to pay rent and live like ‘real’ people. We have tours lined-up towards summer so that we have time to prepare and decide whether we want to do an album or release Eps. We’ve got a lot of material to release and we want to be a lot more organised. Before, we were shooting ’round the country just gigging everywhere that we could. I wouldn’t change that, but I think it will be good to organise our time a little better.”

S] How do you find touring?

M] “I love it. I feel weird when I am not gigging! It’s nice to come back to York, take it easy and then get back on the road.”

S] Do you think you can succeed commercially as a band in York?

M] “Absolutely. I don’t think that you can do it if you don’t leave York! You have to tour. There are so many ways an artist can be exposed now through the internet – that’s the way to get listened to. I prefer doing everything life, but you can’t deny the other options.”

S] What’s been your defining moment in the band?

M] “There’s no defining moment. It’s more about the three of us and our belief in the music. We’ve had the chance to play with some really good bands, and I can’t really pick one as a defining moment!”

S] Are there any bands that you champion from York?

M] “There are a couple of bands that have just split up that we really like. The Federals have just split up and we supported them on their final show and that was great. I also loved Hijack Oscar but they’ve split-up as well! Now, theFALLEN are doing metal really well – they’re good writers and really tight. Also, The Buccaneers are great – I don’t think that they get enough recognition as they should. Like us, they just love making music. Another one is Boss Caine – GT Turbo is a legend. I’ve played with him a lot.”

S] What keeps you going as a musician?

M] “It’s for the love of it and getting to be creative. Some of my favourite bands were never huge. So long as I am doing what I love and can make a living that is the most important thing for me. We’ve been making music for a long time and we have seen a lot of bands we like come and go, and that’s sad. I wouldn’t want to throw this away just because we are not making millions of pounds. It’s always been about the three of us loving music.”

S] Who are your biggest musical influences?

M] “When myself and Andy started writing music I think that our friendship was based upon the fact that we both loved Led Zeppelin [laughs]. We have always been blown away by how good they are. Now, we are inspired by and listen to everything. The two genres that influence me personally are punk and blues. They’ve been a really big part of my life. Andy and Jase [Brooks, bass] have their own thoughts too.”

S] Where did the name come from?

M] “We didn’t want a name that represented anything else other than what we could make music around. We wanted the music to be most important. There are no pre-conceptions about the music as a result of the name – they can’t put us into a category. So, we are just 98Pages and people judge us on the music rather than the name.”

S] What film would you ideally like 98Pages’ music to soundtrack, we were thinking something like ‘Reservoir Dogs’?

M] “That’d work. The imagery that we had on our first album reminded me of how the posters were done for the film. In the movie they’ve got these light-hearted sounds over savage moments like the ‘ear cutting scene’, so I think our more chilled out stuff would work well on there.”