Today, we have the great pleasure of chatting to Bill Leeb about music, and the new Delerium record. This is a big deal, and chatting to legends like Bill give us the motivation to do this more. 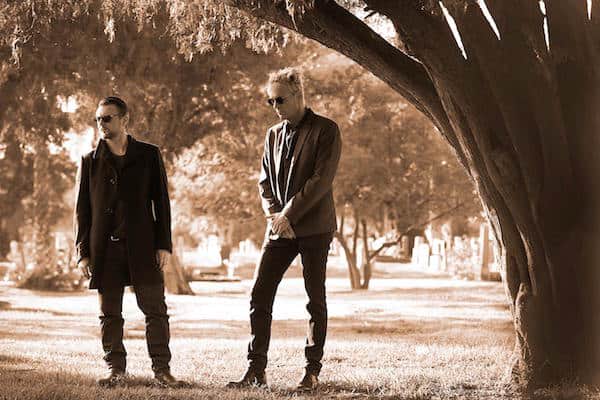 S] Hi Bill, what are you up to today?

Well I just found out that my credit card was declined for no reason, and I lost major sleep because the people across the street decided to have a loud cleaning truck come in and make lots of noise this morning. It doesn’t help when you go to bed a 3:30 am though either. Other than that, we are continuing to prepare for the September 23 release of Mythologie and are still looking for a video director for the first single Ritual featuring Phildel.

S] Talk us through the development of the new record?

This record, without a doubt, took longer than any previous DELERIUM album. The record actually started in Vancouver with Jared, Craig and me writing some songs sort half-knowing they may be for DELERIUM.

Then I wanted to work with Rhys Fulber again and had also decided to move DELERIUM from Nettwerk to Metropolis Records. Rhys and I had initially discussed even doing a mostly instrumental album.

In the meantime, I first heard Phildel through some of her music through an Apple soundbite.  We reached out to her and asked if there was an interest.  Ironically she was planning a trip to North American and also playing a folk festival here in Vancouver.  We sent her a couple of tracks and she literally wrote lyrics on the plane on the way over.

When she finally made it to Vancouver, we got in the studio and recorded two songs with her, not really knowing if it would be for DELERIUM or another project.  For her performance at the festival in Vancouver, she needed a live drummer so I hooked her up with  Ashwin Sood to perform at the festival.  As far as the other new singers go, I have a friend in New Orleans and we have the very same taste in music and art.  She contributed a lot by reaching out and opening lines of communication with Mimi Page, who she had been listening to for a while, and also Geri Soriano-Lighwood.  She helped procure the singers and has very fine-tuned ears as to what the style we were looking for. Basically we write and conceptualise the music and then seek out singers that we potentially know have a particular sound for a particular track.

We wanted this album to ultimately be a blend of signature DELERIUM sounds intertwined with a modern, dark edginess of its own. As usual, you can make plans all you want, but the music always seems to take its own course. And this record has had the most global journey to date and it’s only just begun!

S] How does it push you in new ways as an artist given your varied experiences?

Music is a very fleeting moment and ideas go as quickly as they come.  So therein lies the beauty and  the mystery of music. I feel I have yet to write ‘the song of my life’ so that’s what keeps my drive going to wake up and continue to achieve making new music and being able to give experiences and new feeling associated with these creations to those who will listen.  Obvisouly, with technology changing so quickly, so does all music and art.  If you want to stay relevant and keep pushing the envelope, you have to keep your ears and your mind open to all ideas and constantly evolve.

S] What keeps you passionate outside of music  – think people and places?

Travelling to  new cities, meeting new people, experiencing new cultures are what inspires me.  I love seeing historical architecture.  Over the last 25 years since I’ve been touring, i’ve made a  point to seek out every art gallery that i could. This gives me much inspiration and still makes me curious about history and how societies evolve as how we relate to art and music.

S] What were the biggest challenges with regards to pulling all the collaborations together?

The biggest challenge always seems to be distance, even though work can be done through emails and file transfers.  Time is always a factor as well, especially when you are working with multiple vocalists, writers and other production personnel.  Everyone has challenges in dealing with jobs, families, other projects, etc.  Conceptually it’s also a challenge to pair the right song with the right singer.  Honestly, all of the singers/lyricists are so professional and talented, they fully understood the mood of DELERIUM and enhanced the music and production of the tracks.

S] Zero is stunning, talk us through the inspirations behind that track?

At that time when the music for Zero was created, there was a lot of newer-styled music out like Purity Ring.  We were really inspired by the sound which has a technique called ducking and side-chaining and this was one of our first songs using that technique for DELERIUM.

That song was actually the second song written for the album between Jared, Criag and me as then as things further devleoped Rhys got involved.  Phildel actually was sent the song via internet and, as mentioned above, she wrote the lyrics on the plane on the way over to North America.  When Phildel recorded in the studio here in Vancouver with us, we had never worked with her or even seen her before.  As soon as she started to sing , we felt the magic.

S] What does the immediate future hold for you as an artist?

For the time being we are really looking forward to our new album and single coming out and we will also have a few more singles to following up.   If people respond well, we would definitely like to do some live shows and possibly a tour next year.

S] What would you like your legacy to be as an artist?

In being a patron and great admirer or the arts, I can only hope that my contributions remain as something that people can always go to and find solace in. As we march through history, we use art and music as benchmarks as to what we leave behind. I just want one word on my tombstone (as I am buried next to Ludwig Van Beethoven) “Silence”.