Artist Spotlight: The Federals [YO1 Festival]

Quite possibly York’s best known garage rock sons in a generation, The Federals attained legendary status in the area through the noughties, branching out onto UK tours, a Glastonbury Festival performance and even – yikes – into Fearne Cotton’s t-shirt collection. The band was a bona fide sensation on the York music scene, which is precisely why such a large degree of hype attended their long-awaited live return on YO1 Festival’s Bison Coffee stage this summer. We caught up with The Feds to get the skinny on the reunion. 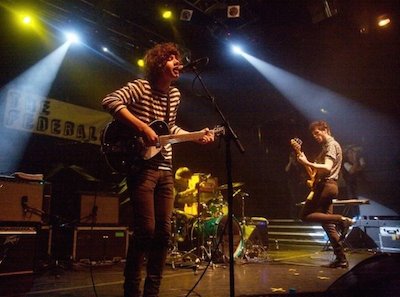 S] The Feds have been off the scene for a while, have you all kept up with what each other is doing? Are you supporting each other’s work?

TF] “It’s better now than last time – the band stopped and kinda stayed friends after, so maybe we just needed a time-out while everyone moved around to places like Brighton and Manchester.”

TF] “I don’t think we even know! Once we said we’d be doing this, people have been getting in touch seeing if we wanna do other stuff. I guess we’ll just see.”

S] What’s it been like since you started rehearsing again – the same as when you left off or different?

TF] “We’d only played as a four-piece before – so it sounds a lot fuller with all five of us now. We’ve got it back pretty quickly. Every song’s like 2 minutes, and we did a 7-hour rehearsal, so God knows how many times we played each song…”

S] What are the stand-out bands in York at the moment and what do you think of the York scene since you left it?

TF] “It’s gotta be Bull hasn’t it… Bull and …And The Hangnails. Dead Bird’s great as well. I think it’s good at the moment. Joe and Dom are doing good stuff with Sea Records, and Joe’s obviously putting stuff on with Please Please You.”

S] Have you ever missed the welcoming York scene and its promoters on your travels?

TF] “No, not really [laughs]… We missed playing together more than anything.”

S] Are you working on any new songs?

S] What inspired The Feds’ material in the first place?

TF] “I suppose it was kinda like The Stooges, The Sonics, a lot of garage stuff that’s a bit more punky… And then stuff like Jim Jarmusch films, film noir, The Maltese Falcon, The Third Man, stuff like that. When it started there was no direction – we were only sixteen and it was just four of us in a room messing with loud noise.”

S] How did you come to be playing at YO1 Festival? Who tempted you back?

TF] “Originally we were gonna do this New Year’s Eve show, but then that fell through. We already had it in our heads that we were playing at some point, so it was kind of a no-brainer when Danny called round and asked if we wanted to do this.”

S] How have you all changed and developed musically and as people since The Feds the first time around?

TF] “It’s gonna be ten years since we first started playing in September – that’s quite a long time. While our friends were at uni we were all doing gigs. We’re pretty grown up now… but then we’ll all go crazy when we’re on stage.

We’re just experienced from playing in different venues, playing various different instruments, recording, travelling and stuff like that. We played a lot of gigs. We literally played week-in-week-out at Fibbers and loads of other venues… We were pretty much the house band at every venue in York… back in the day when Fuzz Club first started. We played so much that we developed a thing where when you’re playing you can tell what each other’s gonna do before they even know it. It was such a big part of our lives growing up.”