It’s been a long time coming! We are excited (and honoured) to unleash this interview with Pollard Berrier of British electronic music legends, Archive. Here, we talk on the new record, The False Foundation. 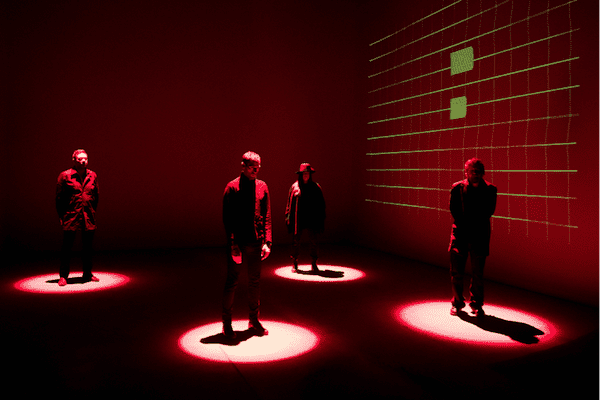 All fine and dandy, thanks. It’s a humid, warm day in England. We’ve actually had a decent summer here this year – first good one since 2006!

S] Talk us through the inspirations and ideas behind ‘Bright Lights’?

‘Bright Lights’ was probably the quickest tune we wrote on the album. The lyrics just flew out of me, really. It was just a moment of calm and beauty, just appreciating life on that particular day in May. Maybe because the veil of winter was being lifted and the air was beginning to be sweet again, but whatever the reason, ‘Bright Lights’ was just about those moments where you take a deep breath and enjoy and appreciate where you are at – and with that comes the inevitability of death and that we’re only here chasing all the precious moments; that we’ll only be here for an instant and then we’re gone. Forever. It’s overwhelming, the paradox of life at times. Even with the deepest love for the people, places and things in life, there’s an underlying sadness and pain that comes along with it, knowing that it will all be just memories by the end of it all, not knowing where it goes thereafter.

S] Talk to me about how The False Foundation developed in terms of the concepts and ideas running through it, that you’re willing to expand on?

The False Foundation is a cinematic journey that covers a lot of ground in terms of musical development. There is definitely a thread that goes all the way through it, but I wouldn’t say that it is a concept album. As usual, we leave the subject matter and ideas open to interpretation. We wrote it with a familiar Archive approach, in that we’re just reflecting back what we see in the world and playing on those and similar ideas. There is always a lot out in the world to be inspired to write tunes about.

The process of this album saw us returning to an analog-heavy vibe. A lot of analog keyboards and drum machines. We mixed it ourselves with out any recall, so that process was longer than recent albums. The songwriting process was a bit more thought out, where we would record a lot of initial ideas and leave them time to grow while we stepped away from them and continued our ordinary lives. Coming back to them made the experience feel different and more organic, in a way. We were able to craft the songs with a lot more depth and thought because of it.

S] ‘Blue Faces’ is a stunning opener, talk to us about the inspirations behind that one – it sent shivers down my spine!

‘Blue Faces’ came about by Darius recording Gary Jules as just a demo recording over the piano line Darius wrote. It was just the perfect opener and they thought that they would re-record the vocal take another time, but we ended up using the original. Darius then followed up with recording Jeff’s guitars. Then Dave came up with the blue faces line and I laid down all the  backing and harmonies – again, all of it in different takes and at different days/times, living with the ideas until they came together and were finished. We’re happy it was recieved by you so well!

S] As a band that has achieved much success over the years, what would you say your biggest challenges now?

Just to continue to push ourselves, not get lazy and to challenge ourselves to make better and better music, which I feel we’ve done with this album. There is so much great music out there now that one can’t afford to rest on one’s laurells.

S] Given that you guys have been touring for years now, do you still have the same love of it?

I can’t speak for everyone, but I enjoy it as much as I ever. We’re still building up this beast that is Archive and touring is a major part of that. We still have ambitions to get to Canada and the States, as well as anywhere else in the world that we haven’t played before. Last tour, we went to Russia for the first time, which was great. Playing for the loyal fans all over Europe is still amazing. We’re looking forward to building on that and expanding in the future and for that, we have to tour.

S] What stuff is inspiring Archive now, outside of music – think specific people, places or movies?

We’re all doing different things, but living in London keeps me pretty inspired all of the time. It’s been nice to enjoy the summer and be outside a lot. I can’t think of anything specific right now. I mean, people watching in Soho as the sun is going down. Trips to the V&A museum. That kind of thing. Travelling when we can.

S] How do you look back on the success of your earlier works like ‘Noise’ now?

We love all the albums – not titled ‘Take My Head’ – and are proud to have made them all. It’s still an inspiring, mind-blowing thing that people feel our music the way we do. We appreciate it every day and plan on making great records as long as possible!