York is not necessarily a city renowned for its legends of music. But if you get some dirt under your nails and scratch the surface, you’ll find a mini-paradise of alternative rock. One of the many important pieces of this music scene is a band called Asio’s Eyes. Still establishing themselves and finding their feet in this cluttered world of rock, Asio’s are a small but shining light of psychedelic, alt-rock. You’d be forgiven for not having heard of this four-piece right now, as their journey is still young but none the less exciting. 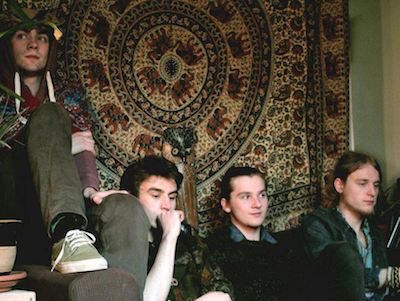 Sam Howarth, Joel Whitaker, Callum Topham and Tom Gabbatiss sit down with us at Access To Music to discuss their journey so far and begin from the start. After the band got together, following the demise of previous musical endeavours, they began what would be Asio’s Eyes, and their first gig followed, Sam reflects: “We played an acoustic gig didn’t we? at what was Stereo, then there was a house party afterward and Flowers was on by Radiohead and he [Tom] was there dancing, and so we knew from that moment he’d be in the band, and that everything was coming together.

Sam continues on, examining the band’s more recent past: “We’ve been on two country-tours, we played in Leeds at the Left Bank which is a church and did a session there.” Despite the contrasting location “It was perfect for our vocals” they explain “being in the church was perfect”. Asio’s Eyes are clearly a band that aren’t afraid to go against the grain and try something different where others may wriggle their nose up like a sulky infant at such an opportunity.

“We played Galtres Festival last year on the Black Howl stage with some really great bands and both tours we’ve been on have been really good,” says Sam, speaking of some of Asio’s career highlights.  “We played at Liverpool Sound City festival and then actually won, that was a massive moment for us.”

In the world that we now live in, bands can go from nobodies to worldwide phenomena in a matter of hours with videos going viral, bad press and bizarre gimmicks, but Asio’s Eyes are a more traditional-ish band, working the music scene and touring, we get the lads to voice their opinion on the York music scene. Joel comments, and the rest of the band nods in agreement: “It’s really, really good but it needs pushing out there.”

Given that York doesn’t have a “musical identity”, at least not in the sense that Manchester is known for the Madchester era and Birmingham for the creation of heavy metal, it’s interesting to see where these bands take their influences from and if their location reflects that. “Game of Thrones is a big influence”, Sam jokes, “We’ve never written a song about Game of Thrones. My lyrics are influenced a lot by poetry, books I read and other artists.”

Asio’s style of hippy-friendly-spacey-psychedelic rock packs a unique sound that they attribute to their varied worldly influences including Radiohead and Warpaint. Sam continues: “When it comes together it doesn’t really sound like any one of our influences.”  Still relatively in their infancy, Asio’s Eyes have achieved plenty and more compared to many bands of their size. If their cosmic mixture of psychedelic indie rock sounds up your street, you’ll want to keep some tabs on this band.