In our next band spotlight, we chat to Luke Branch, vocalist and guitarist of new alt-rock wonderthings, Asylums. 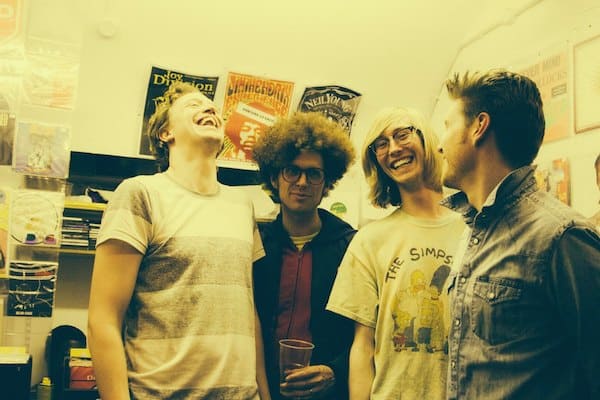 L] “I just digested the new Refused album and the new LA Priest album, before that I was on the piano working on a song about aspirational footwear.”

S] How have your goals regarding Asylums changed over the years since you started out?

L] “The goals are still exactly the same, make the art you want to make for the sake of creative fulfilment, enjoy the process and deliver it to the world with originality and passion. It’s an art project really.” p>

S] How surprised and excited have you been at Asylums success both on a mainstream level, but also within alternative music communities?

L] “Everything seems to have happened at a very steady pace so it’s not been TOO overwhelming, we have been very careful to stick to our principles and have a clear idea of what success looks like for us. Its ace to have put four singles out over the last 10 months and watched it grow each time. We totally value and engage with alternative culture and mainstream culture in equal measure so its extremely flattering and exciting to be able to speak to both.”

S] You’ve supported the likes of Killing Joke and Black Grape – do you think it’s important to open your sound up to as diverse a range of people/fans as possible?

L] “We just say yes to stuff we think will be fun, that’s kind of our golden rule. Jaz Coleman and Shaun Ryder are just complete legends so we couldn’t say no to either of them, plus as hardcore music fanboys we can enjoy those experiences as fans. We recently did a tour with The Vaseline’s and I got to play ‘Molly’s Lips’ with them, I nearly exploded with joy! It’s definitely exciting to play with your hero’s and connect with new people, winning over an audience that doesn’t know you is one of the greatest feelings you can have as a musician.”

S] What’s been a career highlight for you so far?

L] “Being play listed at Radio 1 on our own label, and playing Glastonbury in the same week was pretty amazing. It was also nice when my Nan watched our music video on Channel 4’s Sunday Brunch and started dancing with a fag hanging out of her mouth.”

S] What about a creative highlight – a eureka moment for the band?

L] “There have been so many lovely creative moments, from song writing breakthroughs, recording, video making, conceptualising artwork and fun marketing materials. I think the most significant creative breakthrough was on the new single ‘Joy In A Small Wage’ where we were able to put out a pop song out into the world which has something to say but deliver it with all the fun and sarcasm of our harder-edged material. It’s been nice to show are different side.”

S] What keeps you passionate outside of music – think film and books for example?

L] “At the moment I’m really into advertising and branding, I spent most of last week reading about the Nike logo and the story behind the Apple Macintosh logos….there’s a lot to relate too in both stories actually from an entrepreneurial perspective. All of us in the band are quite arty, I have personally been making a series of collages this year that mix fast food advertising with behaviour medication pamphlets.”

S] What inspirations and ideas went onto ‘Joy In A Small Wage’?

L] “I spent many years growing up looking out of the window of the bus watching the thriving high street in my home town disintegrate having spent my last tenner on an album or a strange artefact from a charity shop.  ‘Joy In A Small Wage’ reminds me of those times. In the second verse there is a line “There’s a purity you see in the absence of wealth” that has lots of meaning for us, as people, as a band and as a record label. Musically speaking I was keen to hear what it would have been like if Elvis Costello wrote a song for Mudhoney!”

S] If you could come up with a Frankenstein’s Monster for Asylums – the head of err..Talking Heads, the arms of The Pixies and the legs of The Foos, for example – what would it be made up of?

L] “Finish the festival season and the debut album, drop another track and video in a few months. Tours, support slots, unpredictable marketing strategies, good times and very little sleep. 2016 we will drop the new album.”