For our latest band spotlight, we speak to Joe Bell, bassist of Avalanche Party about their music and inspirations. 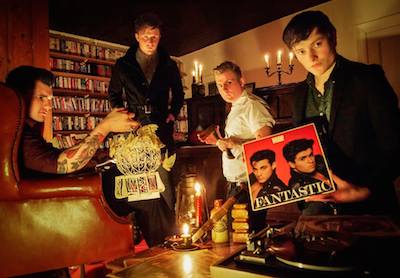 S] How does the North Yorkshire Moors inspire your sound, if at all?

Joe] “It’s hard to say because we’ve never known any different. I think the moors are as good a place as any for a band to come from, you can draw inspiration from the scenery if you like plus you’re subjected to the harshest weather in England. When you go to other places and come back you notice the smaller differences more. It’s dead silent after midnight. You can actually see the stars. That kind of thing. It’s definitely an inspiration, but having said that we’re not The Wurzels. I think the fact that there’s fuck all going on helps too. When you grow up in a place with no school, no TV, no shops and no streets you’re forced to make stuff happen. The situation we were in growing up meant that we were always listening to music and we started playing at an early age. We were able to build our influences pretty early. That’s been the biggest impact of living here. At the same time The 1975 probably wouldn’t be the same band if they’d seen some of our winters.”

J] “That was one of the first songs we had. The idea for the chorus came first and then it was just a case of working out the rest of the song, which happened pretty quickly. We just worked things around the chorus hook. Lyrically it’s pretty grandiose which does just fine for Bon Jovi.”

J] “I don’t think a band needs any kind of mission statement other than to be entertaining. That’s what we want to be, we want to write songs that excite us and are entertaining to listen to. This isn’t a cop out answer either, in music, entertainment is key and that’s something that a lot of bands forget and the best ones don’t. Our idea of entertainment involves feeling energised, the best gigs are the ones where you come out afterwards feeling a million times better than you did before, music can give you power that you didn’t have otherwise and that’s what we want to put across, on record and at live gigs.”

S] What are you guys passionate about outside of music – think movies or literature?

J] “We do all sorts. Kane [Waterfield, drums] has a family which I think he’s pretty passionate about. We’re all Boro fans. Joe was on the England Karate Squad. Owen’s into sorcery. Book wise I’ve just finished ‘Long Hard Road Out Of Hell’ by Marilyn Manson, which was dead philosophical. I’ve also just started watching ‘Twin Peaks’. We’re all into other things but music’s the only one that’s there every day. Watching more films these days in a smoky haze on a night time. I watched a film called ‘Dead Snow’ the other night which was so ridiculous I’ll recommend it. Skis and Nazi zombies.

J] “We’re ‘taking a month out’ in September due to the imminent arrival of Kane’s second child. What that actually means is we’ll be rehearsing even more and working even harder writing new songs for when we’re back on the road October onwards. We’ve already got some good gigs lined up for that. Twisterella Festival in Middlesbrough is on October 11 and has an amazing lineup, we got picked by BBC Introducing to play which was very nice. We’re doing some gigs with The Franceens which we’re really looking forward too, and we’re playing Preston, Liverpool, Sowerby Bridge, London…all at venues we’ve heard a lot of good things about so that’s exciting. Check our Facebook page for dates.”

S] Can you think of a Frankenstein’s monster for the Avalanche Party sound – for example, the head of Joy Division, the arms of The Sex Pistols and the legs of Jimi Hendrix – what would the monster be made up of and why?

J] “After we played Evolution Festival in Newcastle a guy came to get a CD and said we sounded like FIDLAR crossed with Nick Cave, which seemed like a good thing to us so we’ll follow his lead. Nick Cave’s head for the diversity of songwriting, showmanship and the strong religious overtones here and there. We’ll have his powerful organ too. There are loads of bands that could claim part of the body but we’ll have Thee Oh Sees and FIDLAR as the arms and legs both for blistering energy. Queens Of The Stone Age, Bo Diddley, Matt Helders, Wilko Johnson, Keith Moon, Screaming Blue Messiahs, Cocteau Twins, The Stooges, Link Wray and Timothy James Oxnard can have a finger each.”