After a hectic year of playing some of the UK’s biggest festivals, and completing their debut album ‘Halfway Home’, Bad Touch are ready to unleash their brand of fresh, fierce rock n’ roll in to your face. They’ll probably offer you a cup of tea, too. They are currently on tour with Irish rockers, The Answer. We managed to catch them for a quick chat, about the release of ‘Halfway Home’, how it feels to be touring with their heroes. 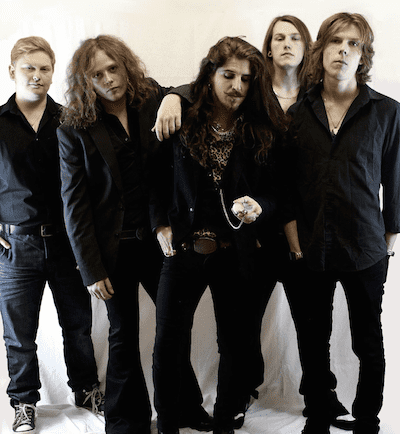 S] Hey guys, nice to see you again. Can you introduce yourselves?

George] “And I’m George, the drummer.”

S] So first off, can you describe Bad Touch in a single sentence?

Steve] “Err… no. [laughs] I suppose we’re just, good, old-fashioned British rock n’ roll. That’s what we do innit? Feel-good stuff. There was a full stop in there somewhere right?”

S] Who would you consider your main influences?

George] That. I can’t say The Answer can I really, though they are a huge influence!

S] It’s been a monster year for Bad Touch. You’ve hit a lot of the major festivals and now you’re on tour with The Answer, how’re you feeling about it all?

Steve] “It’s amazing for me, I’ve been a huge Answer fan for what seems like forever, so it feels like a dream come true for me. It’s all going really well! We’ve just gotta keep the ball rolling so people don’t forget about us.”

S] Absolutely! Could you describe some of the realities of being in a touring band?

Stevie] “Everyone thinks its champagne and hookers but it’s really not. We’re at this really awkward point where we’re doing these long tours, but we don’t have the money to book the nice places. It’s just three solid weeks with the guys, and that can make or break the band.”

George] “Sitting down with a cup of tea is like, the highlight of your day.”

S] I hear that one. So, what do you guys get up to outside of the band?

Steve] “Well, we all work, just to fund the band really. I’m a barman, Seeks is a delivery man, Rob (guitar) is a carpet fitter. It’s all fairly mundane stuff, so you can see why we do this whenever we can.”

S] Of course. How’s the album doing? It feels like we’ve been waiting forever to hear it!

Seeks] “The album is an exclusive tour purchase at the moment, it actually comes out on the 27th April. But this was a great opportunity; we’re playing in front of lots of new people with The Answer, as well as people who have seen us many times before, and they deserve the album.”

S] How are you feeling about the current underground scene? Are there any bands you’re in to right now that you’d like to share with us?

Steve] “A lot of the bands we were following have either gone away or gone up. Bands like The Crave, Heaven’s Basement… well, they’ve gone up.”

Steve] “The last six months have been a bit of write off for us; we’ve been in a cave writing songs so we’ve not kept up to date. We quite like Sons of Icarus, Buffalo Summer, Tax The Heat, they’re all good guys.”

S] Some good bands there. Okay, serious time. You can only listen to three albums for the rest of your life. What do you pick?

George] “Oh this is gonna be so bad.”

George] “I’d probably go ‘Led Zep IV’, that’s my favourite one, probably ‘Revival’ by The Answer, and ‘By Your Side by The Black Crowes. Great album.”

S] That last one is imperative, for sure. All right last one guys, sent from a fan. Do you feel like there’s a certain stigma surrounding British bands that try too hard to “Americanise” themselves?

Steve] “I think there is. I’m aware that a lot of my influences are American, and some of my diction is slightly American when I sing. I have to make a conscious effort to try and sound British, because I like the fact that we sound like we’re from England. I think the stigma IS there, but you can’t blame anyone but the people that are putting the stigma on it. If you don’t like it then it’s not the band’s fault.”

Seeks] “I think as well that a lot of American bands try too hard to be British, that’s just the way it goes. Our biggest influences are mostly British bands, but then there’s the obvious American ones like Guns N’ Roses and Aerosmith.”

George] “Who were influenced by The Beatles, The Rolling Stones…”

Steve] “It goes back and forth. That’s the way it’s always been so, stop hating and get on with it. If you like it, you like it!”