In our latest band spotlight, we chat to Sam Hartill (bass, production), and Rich Watte (vocals, guitar, production) for Bone Cult about music, inspirations and more. 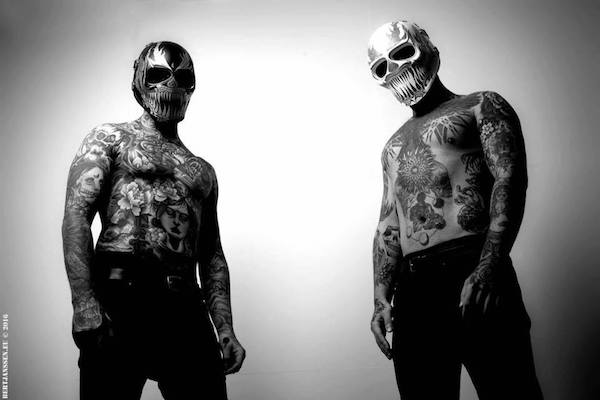 S] How did the band form?

Sam Hartill] Rich and myself met whilst studying in University. We were friends of various bands and after a while were sick of the regular 4 guys in jeans and t-shirt look so wanted to create something better.

S] What are the biggest challenges for you as a band?

Rich Watte] Convincing people we aren’t a metal band! The name Bone Cult definitely provokes a heavy image in a lot of people’s heads especially with our masked image which can come off as intimidating to some. We consider our music to be more eclectic than just one aggressive gear and make sure to show that during our live set as we feel that makes for a better performance than just a barrage of distortion.

S] Why so many name changes recently?

SH] I suppose this links back to the previous question. The name put so many people off and we ended up playing the wrong line ups which we found really frustrating as the audiences didn’t connect well with what we were doing. We’d been making a lot of new music as well but didn’t feel it belonged under the name Bone Cult again as the name sounds so hard-edged. In hindsight, you could say they were just side-projects to get that music out of our system.

S] What are your plans for the rest of this year, and into the next?

SH] Touring! We feel our band works best live and it’s what we enjoy most about doing Bone Cult. It’s always great to play to new people who have no idea what we do and then come on with the masks and light show and make a lasting impression.

RW] We have a music video coming out in December which we film in Holland, then shooting another music video in December in London and then hopefully flying to Canada in 2017 for some shows.

S] Talk us through the main inspirations for you when writing material – think movies, people and places for example?

SH] We’re both huge cinema fans so spend a lot of spare time watching films especially 90’s stuff. That’s probably fed into our music tastes too, like The Chemical Brothers, The Prodigy and Aphex Twin. In the earlier days of the band we used to come on stage to Patrick Bateman’s monolog from American Psycho as it’s one of our favourite films.

RW] Anu is named after a God of an ancient civilisation. It has a certain ‘Army of Me’ vibe to it. Lyrically the song contains a lot of references to feeling enslaved, a theme that runs through the Blackwork EP. Years & Legions really sums up our sound – it is high energy and there’s a chorus hook built around the distorted synths and beats. It’s about paranoia but there are references to religion too.

S] Your back-catalogue is completely free, is there a reason behind that decision?

RW] We would much rather people listened to our music for free than not hear it at all. When you just discover a new artist it’s a great feeling to be able to download all of their content straight away and load it on to your phone, music player, laptop etc. We find we can really get excited about artists that do this, it really welcomes new listeners rather than put them off by asking for money just when they are getting interested.

S] If you could come up with a Frankenstein’s monster for the Bone Cult sound – for example, the head of The Prodigy, the arms of Little Death Machine and the balls of Rob Zombie, for example, what would it be, and why?

SH] It would have to involve the prodigy in some way. Perhaps the feet for the speed of our songs.

RW] The head of Daft Punk, we love what they do visually.

SH] Fists of Death Grips as they’re so aggressive.

RW] The style of Kanye, he’s not afraid to change his sound each album.

S] How did the visual side of the band come about – the masks, heavy smoke etc – how important is that visual element for the band?

SH] We’ve always worn masks during shows. We enjoy the theatrical element to the live show and the mystique that comes with it. The heavy smoke helps with that because it swallows up the stage and crowd, we like the atmosphere.

RW] A gig should be something memorable and entertaining so we try to create something unique for people to experience.

S] Do you guys have any projects (music or otherwise) outside of Bone Cult?

SH] No, all our time and energy goes into Bone Cult. It’s all we think about!

S] What’s been a career highlight for Bone Cult?

RW] We’ve been lucky enough to play with some awesome bands. Opening up for Slaves, Sleaford Mods and The Qemists in the last year were some personal highlights.

SH] Going abroad last year for some shows in Europe was another highlight just to break new ground, something we’re planning even further afield into the new year!