We have our long overdue catch-up with Owen Brinley of Department M in our next band spotlight. 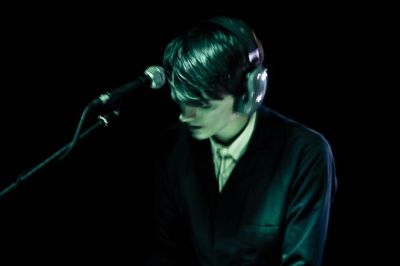 S] Hey Owen, how are you doing today, buddy?

O] “Good thank you, enjoying a rare day off. It’s 3.20 in the afternoon and I’ve resisted the urge to hit the pub thus far. We have gigs next week so I’m spending time getting my voice and guitar playing into shape.”

S] Talk to us about how the band has developed over the last few years?

O] “Well, Dept.M was initially a bedroom project, but I would take tracks over to James Kenosha’s place in Bridlington and we’d bring them to life adding drums and colour to the music courtesy of the huge live room and outboard he has there. After sharing a couple of tracks online suddenly there was the need to play live so I roped in friends Tommy (Pulled Apart By Horses), Wu (Stalking Horse) and Liza (Menace Beach) and we became a fully operating live band. Fierce Panda released a mini-album of the first couple of years of Dept.M music in December 2013.

After the mini-album I wanted to move Dept.M into a more musical realm, away from the cold and sometimes harsh sound the first record had – the word ‘industrial’ was banded around in reviews but I have no association with that kind of music. The last couple of years were spent jamming with Tommy and recording a debut LP, again over in Bridlington. It was a super fun process, we’ve worked with JK for so long now that things come together with ease…it’s like a holiday for us going over there. The new album is a much warmer experience, I wanted to convey the spirituality and thrill of pure pop music but lyrically it still has a very unsettled undercurrent. I’ve always enjoyed that contrast –  like in Elliot Smith’s music, he would present something so pretty but there was this violence and anger lurking beneath the surface.”

S] What’s keeping you passionate outside of music?

O] “I read a lot, my thing is kind of horrible dark grimy fiction, so recently I read a few of Tony O’Neil’s books and am now back onto ‘Glamorama’ by Brett Easton Ellis (for what must be the tenth time). Another book I loved recently is ‘The Death Of Bunny Monro’ by Nick Cave, I was saddened to hear the tragic news about his son. I’d love to write a novel but I’m not sure the pull away from music is great enough just yet. I also love going to watch football, food, beer, clothes and art…my favourite artist being surrealist Kay Sage. I find visual elements can influence my music as much as sound.”

O] “At the moment we’re just familiarising ourselves with playing the debut LP live. Liza had to leave to focus on Menace Beach, but our new guy Oliver is doing all sorts of live effects and triggering so we’re putting in the hours getting that down. We’re doing co-headline gigs with one of our favourite Leeds bands, Post War Glamour Girls next week at Gullivers in Manchester on 5th August and The Brudenell in Leeds the day after. We’re also back down in London at Birthdays on Oct 10th and we have a single coming out on Hide & Seek on August 7 which is available to pre-order now. Other than that we’ll be preparing for the release of the LP.”

S] Talk to us about the inspiration behind ‘Bleak Technique’?

O] “I suppose it reflects on the consequences of us all being connected through technology and how that’s exploited by big business – the paranoia of your every move being logged. People are coming to terms with the fact that aspects of the internet and social media aren’t such a great thing after all – they’re taking a step back, trying to reclaim a semblance of privacy. There’s this great urge to disappear from it all but also the feeling that you’re trapped and will fall off people’s radar if you do so. That can be an odd and unsettling feeling.”