By Francesca Fortunato May 19, 2016 Band, Spotlight
No Comments

After creating a buzz in the Manchester music scene last year, False Advertising show no signs of slowing on their rise with their first tour under their belts. We spoke to Jen Hingley about the trio’s inaugural tour, the writing process and their plans for the future. 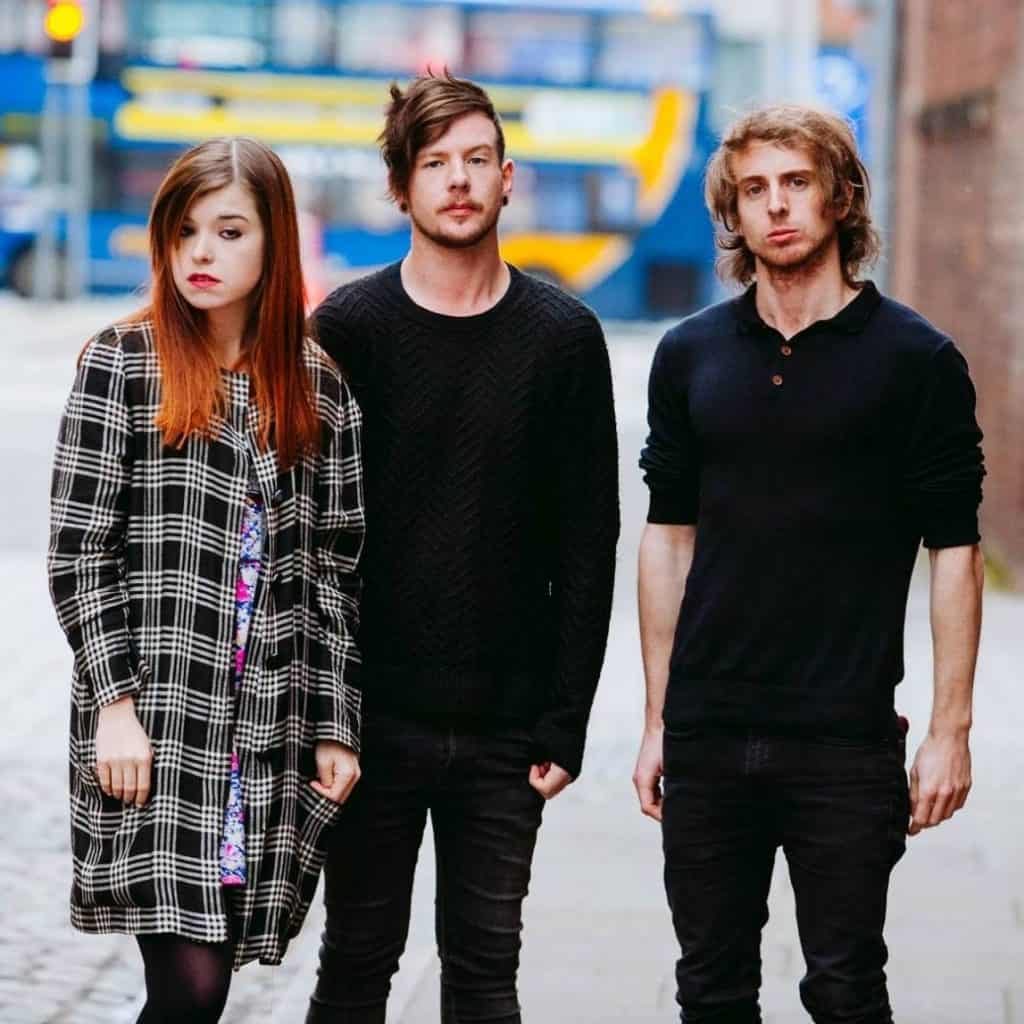 S] How is the tour going?

J] “It’s been going really well. It’s our first ever tour. We’ve done about eight dates over the last couple of weeks. We got PRS funding for it, that’s been a massive help because we’ve had extra equipment, we’ve got nice in-ear monitors which makes the onstage sound really nice. People have been coming. It’s been really great to meet so many people. Places like Hull were amazing with so many people for the first time, and they were really enthusiastic. I did lose my voice last week for a bit, which was not ideal.”

S] How did you cope with that as a vocalist?

J] “We swap around so Chris, who plays drum while I sing, we swap and I play drums while he sings so we were able to pull it off. We got through most of the set, but we had to do a couple of instrumentals. There was no way I was going to be able to make a note. The other gig we got a friend, to sing a couple of my songs, Michael from Elevant. He pulled it off.”

S] What have you got planned over the next couple months that you can tell us about?

J] “We have a few festivals booked so that’s what we are going to be doing next. I think all of our next gigs are festivals. The next couple are about to be announced shortly. That is going to keep us relatively busy. We also have a 7” single out called ‘Give it Your Worst’ with Too Pure Singles Club. It’s on the EP, but it has a brand new B-side. We’re going to be planning what we’re going to do next and writing.”

J] “I’ve lived here for about eight years. Chris and Josh grew up around Manchester. I think there is a lot of comradery with the other bands. For our rehearsals we have bands like The Hyena Kill. You see everyone else doing really well and we want to do really well too. Everyone’s really encouraging each other. I tend to write my songs relatively quickly and they tend to be based around my personal experiences. Not directly, I don’t go to the shops and write something about that. I have to let things build up and then I’ll write a song and see what seems to be the right kind of voice to go with it. A lot of my newer songs are based around the time that I spent last year travelling around a lot. I had a difficult family circumstance which meant that for a few months I was living in Manchester and Oxford half and half. I ended up demoing all of my EP tracks, Chris did his as well. They ended up being all about being split between these two places more or less and I was a bit angry as well. That flavoured it more directly. It just ends up being a collection of the experiences I’ve gone through.”

J] “I think so. It was definitely a distraction. I didn’t sit down and say ‘I’m going to make this my outlet and I’m going to live through these songs’. It wasn’t from that kind of place. It was like we all decided we’re going to do some new recordings soon and we have to write songs and I happen to be going through this thing, but I have to write songs. I’ll just do what feels right because there was a time pressure. It did help. Looking back on it now, I was quite desperate in a way because all the songs are loud and shouty, which is a new thing for us.”

S] Since you started the band do you feel like your goals and ideas have changed?

J] “We came from a strange place where we wrote our first album and recorded the majority of it without having played a gig. We basically wrote it in the studio, so a lot of what’s happened now with our new stuff is directly influenced by the experiences we’ve had playing for people live and how they respond to it. That’s as much of an influence as anything really. I’m proud of our album and I think the songwriting still stands up. In terms of our mindset, we needed songs to complement our louder songs. I didn’t sit there doing demos and think I had to write a song like this, but that’s a subconscious reason we went in that direction and I’m really pleased we have because now we have a much more energetic set, but it’s more dynamic at the same time. It felt very natural, it was an evolution in ourselves through necessity. I’m glad it’s moved in what I think is the right direction now.”

S] You guys have done really well and have a lot of people talking. Given the level of success you’ve achieved in a relatively short amount of time, how would you advise bands from smaller areas to make a similar impact?

J] “This is the thing that I’m really pleased about in terms of how we’ve done it. We were very lucky. Chris is a producer and we were able to create recordings. It took us a while behind the scenes to get it sounding as good as it did. We had the luxury of being able to use his expertise and come out with something that sounded reasonably well produced. I think giving yourself the time to think about the kind of band you want to be and the kind of sound you want to achieve. You might only be able to record it in your bedroom, but wait to put out recordings until you’re truly sure they’re representative of the band you want to be. We decided we were going to do it all in one day, we’re going to put out a song, we’re going to launch our Facebook. We didn’t exist until the day we put out our first song. That’s the reason people cared. We were a real band that day. It’s not like we just launched a Facebook and tried to get all our friends to like it. There was a bit more to get your teeth into, which is the reason it started to stick.”

S] A lot of bands focus on putting things out really quickly and don’t take that time to prepare.

J] “The preparation allows you to speed things up later. It’s so tempting to share your work and progress with people because you get really excited about it, but you have to try and keep a lid on it and wait until the right moment, otherwise the impact is nothing compared to what you would have otherwise. I had a moan at Chris because he kept playing songs to his friends. Every time he did it I felt like it was one less person who would ultimately care. That wasn’t the case in the end, I was being a control freak, but that kind of thinking did help.”

S] Having just gone through your first tour what are some of your tips for the road?

J] “I think there are a lot of very obvious things that you can forget about like finding the postcode to the venue so when you put it in the SatNav you go to the right place. Also remembering to take all your equipment away from the venue. I know these things all seem ridiculous, but in the heat of the moment when you’re tired after a few days it becomes easy to forget stuff. We hired our own van since there are only three of us. Chris drove us across the country. If you can afford to have a bigger van and have more insurance and have a driver, that’s what you should do. We weren’t able to do that. It was great. We just turned up on time. Parking can be annoying, London especially. Just be receptive because hopefully you’ll be playing these places in the future and you want to try to network as much as you can. We’ve made a few friends from the other bands and new friends from the sound guys who have been in touch since. As much as it’s about getting people to your gigs, it’s partly that and also meeting the people behind the scenes because they’ll expand your gig network because you never know who you’ll impress. Keeping an eye on both sides of those two things is important.”