Fat Spatula have been building a solid following on the York scene over the past year or so and watching them live it’s easy to see why. There is good variety in the material, from the stoner-Misfits punk of Just You, to Tennessee Hookers’ groovy Tennessee hooks and the 90s alt-remniscence of Growing Boy. It all bounds along delightfully in funky rhythms, dirty riffs and quirky guitar leads. 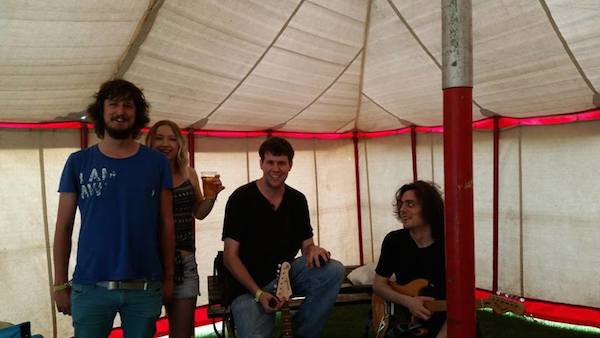 S] Off stage the Spatula are a funny, amicable bunch, evidently very at ease in one anothers company. Though often tagged with the stoner/slacker label, this is a band made up of 2 PHD students, an accountant and a programmer. So where does the ‘slacker’ label come from?

Tim Lawrence (guitar)] “It’s less a description of the people that we are and more of the music.”

Alix Zoe Porritt  (bass)] It’s funny because the last review was like, ‘ You expect these guys to just fall out of bed and be on the dole and just smoke weed all day’.”

S] They formed as frontman Nick (who could have stepped out of an early Kevin Smith movie, albeit from Ohio as opposed to New Jersey,) was introduced to drummer Jamie through a mutual friend “also called Nick” as “I was going around asking everybody ‘Hey, wanna form a punk band? Wanna form a punk band?’ and Jamie was doing the same thing” So they met and formed Fat Spatula, later acquiring Tim and Alex, and began playing shows. They subsequently recorded an EP that was well received . . .

Alix] “One guy bought one tonight, so we’re winning.”

Jamie] “I undercharged for them though.”

Nick] “We’re sold out ’cause we only brought two. Sold fuckin’ out!”

S] The EP was, strangely for this time and place, released physically on cassette. What about that format seemed appropriate?

Alix] “Nothing about that format seemed appropriate…”

Tim] “We recorded it with Elliot [Barker] from Sherbert Flies and he had big ideas about releasing it on tape. And we didn’t argue because we’re slackers.”

Nick] “At first I thought it was kind of silly like who the fuck has a tape player any more? But really, who even has a cd player any more? And it’s a digital download so if it has to be a physical thing…”

Jamie] “You can put a tape on your bookshelf.”

Nick] “That’s what I do. On my fucking bookshelf.”

Around all of this recording artistry and format exploration, The Spatula have managed to get out there, slacking about the good old north.

Nick] “We played in a church in Scarborough. St Mary.”

Alex] “That I gladly missed out on.”

Jamie] “….So we had to find a place to stay, and we finally found this guest house, so me and my mate, Kayla, and my girlfriend, booked ourselves in and we went to this ska night, then had to sneak Nick and Tim into the room later on and had to kick them out really early. Nick wasn’t happy.”

Nick] “I was pissed off! I figured you’d go back to sleep and leave us outside for a few hours. And you would have! You would have.”

Jamie] “It was a bonding experience.”

S] Hopefully these experiences will factor into lyrical material for their intended album on top of Nick’s Oedipus complex and musings on Jamie’s ex-girlfriends. Catch this band live if you can, they do not disappoint and look to be just about picking up some serious steam.

Since we spoke to them Fat Spatula have received some great notices for playing their “first gig in a field” at the Apollo Festival, Jamie remarking that there was “not much good music, but a good day for chilling in a field.” Slackers.