For our next artist spotlight, we chat to Theo Issitt and David Earnshaw of Yorkshire electronic act, Game Theory. 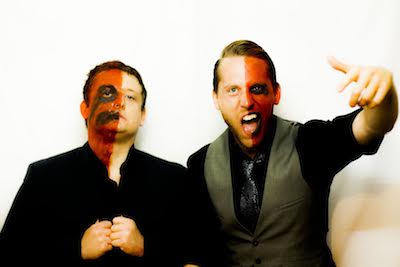 S] What are the main creative passions outside of music – think art, or movies for example?

T] “I’m big on photography, I’m pretty terrible at it but I guess that counts as a creative passion! I am a big fan of the studio Ghibli moves as pieces of art that are also films, it is also a way for me to still watch cartoons at 26! Me and David also love Adventure Time, he might not tell you that however.”

D] “Personally, I have decided to go a bit ‘all in’ in the music industry in the last couple of years so I’m in a bit of a giant music bubble, which I like the idea of.. but anyway, outside of band life I dabble in some studio and live engineering as well as DJing, and my personal life kinda all revolves around doing something musical as well as my down time. Apologies for not actually answering your question!”

S] How easy is it to translate your recorded sound out live?

T] “This is an interesting topic actually as we wrestled with the concept for years (and we still do). We have always traditionally done what most bands do and all get together with our instruments and make songs together and the songs evolve organically as parts are added from each member of the band. This worked particularly well for us when we were in the rap rock outfit Breakout Project.

Nowadays however it’s an entirely different kettle of fish as we have to translate our music and production into a live setting rather than creating music as a live band and then recording it. This has its benefits and downfalls and provides us with different freedoms and restrictions but the translation is maybe not as faithful to the recordings. We have come to really love that our live set often doesn’t sound that similar to the recordings. This is because we use live instruments, like live drums and bass which have their own ‘swing’ and ‘groove’ which lends itself to a very different sound to the recordings. Live vocals and added guitar also add a new element.

I think that people come to see bands play to often hear songs they know and to see how that is translated in a live performance, if people know any of our songs when they come to see us play live I think they will be quite surprised by the difference. Pleasantly surprised I hope, and vice-versa if they see us play without knowing any of our music and then listen to the recording I think they know the difference. It is a lot more honest and raw, mainly because we are lacking that magic ‘production dust’ that people seem to sprinkle on everything all the time. It’s better this way, otherwise we might as well mime everything! So after waffling on I would say that the initial transition from recording to live song is not difficult because we already know where we are going and can see the end goal, but it takes time and is challenging to create a performance of the song which we are happy with. That can be difficult.”

D] “I would add that the metamorphosis from recording to live performance is ever changing and evolving so we could be performing the same song a couple of months apart and there would be new and exciting elements every time you come to see us.”

S] How did Misa become involved, and is she a full-time member of the band?

T] “I saw Misa performing and she blew my tiny little mind! Her voice is both strong and powerful but can also be small and beautiful and it works so well in what we do, I love to have her on our music, it’s the best! She maintains her independence as an artist so that we cannot ruin her creditability! But also because she has her own projects and passions.”

S] What are the main real-life experiences that inspired The Only Way To Be Free?

T] “That song is about how you cannot truly be free, from whatever ties you to this world without becoming lost. It was written from a moment i had once where i had an epiphany during a near death situation. I thought that to truly be free, we must remove ourselves from everything. Freedom, as Mr Gibson would say, is a relative concept, It can be defined as “the power to act, speak, or think as one wants” or “the state of not being imprisoned or enslaved”. With this in mind, freedom is a construct of humans, a prisoner breaking free is free from the prison but not necessarily free from society or anything else. This is why when we are lost we know nothing of anything that may act to restrict our freedoms. The song references near-to-death situations as moments when we might understand that we will be truly free, just like the epiphany I had, where luckily I survived. Basically you can’t really be free without being lost because if we know where we are, we are still attached or shackled in some way to things.”

S] What do the band have planned for the future?

D] “As always we plan on trying to consistently try and write and produce tracks to the best of our abilities which i think is a great thing because personally, I think we are improving and learning new things every track we do so thats a bit of a never ending struggle, nothings ever perfect. Mainly we are planning to perform live as often as we can and broaden our horizons by performing abroad too. We are on our way to Spain soon! As you can probably tell we are wanting to be known for our live act as well as our production but this does not limit us to DJ our stuff live as we have together been developing ways of doing this to still make as much as a live experience as possible.”

S] Are there any artists that Game Theory would love to work with, and collaborate on tracks with?

T] “We were having a good chat with De La Soul at YO1 this year and obviously that would be amazing, but I think that is a little bit beyond us. We exchanged some contact details so maybe if things work out for us that could happen in the future. It is a little far-fetched however. Working with some hip-hop artists would be great I think. I would encourage any readers to get in touch if they feel they are up to the task!

Personally, I kinda hate the sound of my own voice so, I have been very keen to get some new features from male singers to contrast with Misa D. We traditionally come from a rock background so we have been thinking about that angle. We have been talking to a friend of ours from the band Glamour Of The Kill and it is all very exciting! We will be hoping to have a release in Autumn if everything go to plan, so watch this space!”

D] “To be fair, that’s not something I have really thought too much about but I guess I’d have a couple of dream scenarios. One would be to so a total crossover of genres a’la Linkin Park and Jay-Z, but with someone like Incubus or Limp Bizkit – bands which sort of modelled my youth and I still love today. And I’d also love to to produce or write a track with either Booka Shade or Way Out West who are the two main influences behind me getting in to electronic music.”

T] “I recently met Nick Warren of Way Out West in Barcelona and it was definitely like meeting a living legend. If we could get him to remix a track I think i could retire happy!”

T] “Most recently the YO1 festival. It was very good because of the excellent feedback and response from the crowd. Any gig can be the highlight, it doesn’t matter where or when. If people are having a good time and enjoying the music it makes it so much better! When a crowd is responsive and dancing it makes us perform better. The music seems to sound better and its almost like a drug.”

D] “Yeah we are constantly chasing that high. We played at Galtres last year and everyone really ‘got it’. The crowd understood the music and what we are trying to create and we all had a massive party!”

T] “Yeah that was a good gig. I prefer to think of good gigs as career highlights because we are all about performance. Rather than the making of our video, radio interview or things like that. Those things were great, but the best thing is seeing a crowd having a boogie to music we have made. Maybe I am deeply insecure about it but I find it reassuring because it means that we have made good music. Its difficult to judge your own music, it sounds different to us.”