Get Involved! are a post-hardcore band made up of five members formerly of Glassjaw, From Autumn to Ashes, Thursday, Judge, and Death In The Park. After deciding on the route of crowd-funding through Kickstarter, the band have finally been able to release unusually titled ‘(silk cuts)’. The band are currently touring the UK and while they’re here, lead vocalist Derrick Karg takes time out to chat to us for a while about the inspirations and creation of their new material… 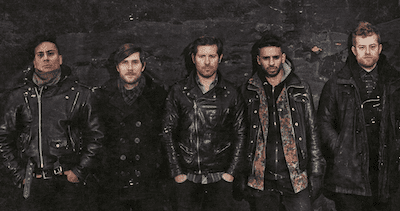 S] How was the reception to your newest EP ‘(silk cuts)’?

D] “The UK is dope. It’s been our best reception so far. I wasn’t certain about how we would be received but it blew my expectations out of the water.”

S] Was the creative process as good as you thought it was going to be?

D] “It’s actually better than I thought it was going to be. The starting point was, “Let’s start a hardcore band,” but because we’ve all been doing different things these past few years, it developed very organically into something that we didn’t really foresee, but we’re so happy that it happened that way.”

S] What inspires the music of Get Involved!?

D] “I was listening to a lot of R&B. You probably can’t hear it in the music but when we sat down and started writing these songs we didn’t want to just do hardcore, we wanted to do post-hardcore. We wanted to be outside of the box.”

S] Tell us what the album is about…

D] “It’s ultimately a song about battling your demons. It’s kind of putting it out there that I’ve dealt with this shit but that there’s hope. I just want to shine a light into that darkness that’s inside everyone.”

S] Was there a message you wanted to convey to the audience?

D] “I would definitely say one of being positive. There’s enough negative shit going around in everyday life and essentially I want to do what my favourite bands did for me and that was save my life. I know that sounds lofty or egotistical or whatever but that’s my goal.”

S] What kind of inspiration and ideas went into the creation of ‘Paint It Gold’?

D] “With ‘Paint It Gold’ life was great. It’s like Monty Python – always look on the bright side of life. We’ve all been there; we’ve all been at the bottom. I’ve scraped the bottom too many times. We all want to reach some sort of light.”

S] Do you feel as a lyricist you’re challenging yourself in different ways?

D] “Yes. Definitely. I’m playing with guys I grew up listening to. There’s a sort of level that you’ve got to get to and for me i had to get there real quick so it’s been a really great learning experience.”

S] What was your experience of crowd funding?

D] “I’m not sure if we’re going to continue with it. I won’t lie; it was probably the most stressful thirty days of my life. But it was a great experience because your fans have a real stake in what you’re doing. You hear artists say, “We couldn’t have done it without you guys”. For us, we can say that with all honesty.”

S] How was it to work with Ross Robinson?

D] “Working with Ross Robinson was the best experience of my life. Ross is a fucking musical shaman. He pretty much breaks you down and puts you back together. He leaves you open. I cried a lot, but in a good way. We’d go through almost line by line and he wouldn’t let me just say whatever bullshit, he would make me verbalise feelings, which is really fu**ing hard.”

S] And lastly, what inspires you aside from music and the band?

D] “I think we’re all kind of movie buffs. I love Akira Kurosawa films. I love samurai films. We all love art and we’re actually going to go to the Tate today, because you guys have got free fu**ing museums which is awesome. We all keep busy, we ride our bikes in Brooklyn, and hang out with each other.”