With pumping electronic beats and dark brooding undertones, GirlsOnDrugs have already established themselves as true artists in their field. Describing themselves as an eclectic mixture of future garage, chill wave and dream pop, you could be forgiven for not fully understanding what was coming your way. The twosome turns the stereotypical electronic genre upside down and inside out, experimenting fearlessly with offbeat timing, vocal manipulation and a hint of tasteful reverb. 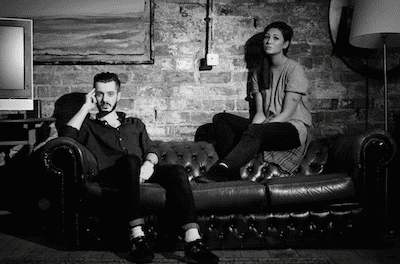 Formed back in 2011, GirlsOnDrugs consists of Luke Lount and Kat Mchugh, but it wasn’t always that way. “It was just me to start with” said Luke. “Once I’d experimented and found a sound that was quite new and original I started to pursue it more, and then I found Kat at college.”

“We knew after the first song we did together that the pairing would work out, but our first song was kind of strange” said vocalist Kat. “The task we had was to put a poem into an existing song, and when we got in the studio Luke just went ‘sing this’ and it was about frogs. So yeah, that was our first experience together.” Rather than having clearly defining roles within the band, GirlsOnDrugs see themselves as more of a team. Despite Kat as the vocalist and Luke as producer, shared responsibilities include writing lyrics and composing melodies, with the final product being tweaked collectively. Both Kat and Luke bring with them a variety of influences from across the musical spectrum, a clear contributor to their unique and exciting style. “My vocal influences are completely different to the electronic side of our music” said Kat. “I really like the vocals of Daughter and London Grammar, whereas Luke listens to darker stuff.”

“It’s juxtaposing in a sense. I’m influenced by noisecore sounds, and things that sound dark and experimental” said Luke. “The music we write compliments each other, and although my influences are weird, Kat’s vocals round it off with a nice sound.” After the formation of GirlsOnDrugs, the electric duo followed in the footsteps of artists such as Lily Allen and Mika, devoting their time to developing a fearsome online fan base before deciding to take their music on tour. “We established our online presence first” said Kat. “We built it up over the course of about three or four months before we did our first show.”

The world of live electronic music has always been a source of debate, with many arguing that the artists are simply pressing a play button, but the duo insist that electronic music still allows the artist to portray emotion to their audiences. “When we play live it feels like we’ve been doing it all along. There is skill involved, you have to take the songs, break them down and reconstruct them in front of a live audience. It may look and feel different but it’s as live as anything else.”

With the release of their EP set to be released this year, GirlsOnDrugs gave us an insight into the story behind two of their top tracks on the album. ‘Party Talk’, their first song to have an accompanying music video, is at its core a dark depiction of a standard party scene. Analysing in depth what the naked eye can see, the song talks about what’s happening underneath the glossy exterior, revealing a seedy underworld. “The song is quite grungy and is about taking a step back and looking at what’s going on at a party. It’s fabricated and all a bit over the top, but it examines the excessive nature of everything” said Luke. “Say if you’re going out in a certain environment, it’s about seeing more to what is going on rather than just what’s happening. More than an average person would and it’s almost viewing the situation from a holistic view as opposed to just being there,” added Kat.

The next song ‘Washd’ couldn’t be any more different. Its beat vaguely reminiscent of the reggae genre, the song has a happier feel to it than ‘Party Talk’. “Washd is about using anything you can to move on from someone or something. Say you were in love with someone, it’s about moving on from that. It’s deliberately vague and unspecific.” With festivals and album all set for 2014, GirlsOnDrugs are at an all time high (pardon the pun).