In our next band spotlight we chat to Lauren Tate of Barnsley alt-rock standouts, Hands Off Gretel. 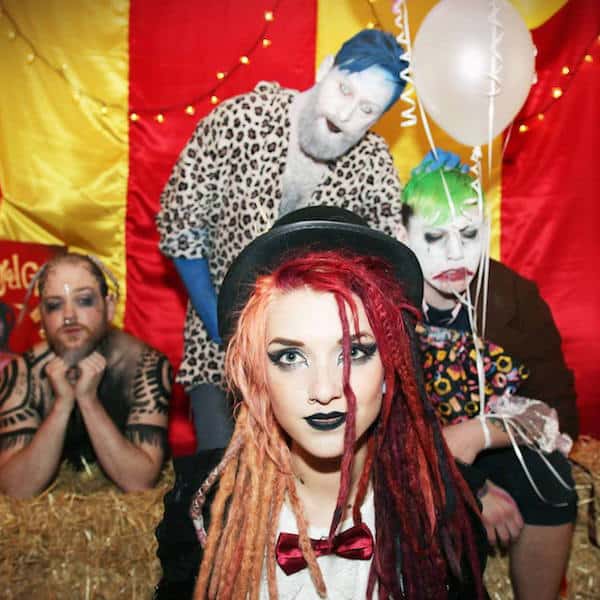 I’m inspired by a lot of things to make music. I guess I’m mostly inspired by how i’m feeling, say if I’ve had a bad day or I’m feeling restless at night time, I like to write songs. Some of my songs are kinda wacky though and I get them out of boredom, I have some really freaky lyrics in some songs and it makes me go red explaining them. Haha!

I guess it’s harder coming from the North because from what I’ve seen theres just more of an active music scene in London. We’ve played Camden more that we’ve ever played our hometown because people there just thrive off new music. It’s like a cool thing to do on a Friday night in Camden, people see new bands whereas in my hometown, Friday night in the centre of town most people just want to get wasted and listen to DJs. I mean, Barnsley has odd music events once a year and music lovers come to them happily, there should be more events like that in the North to get people listening to new bands.

S] Does Barnsley inspire your material at all?

I’d say not at all, because growing up I spent more time in my bedroom than anywhere else. I had a rough time growing up in my hometown, because I was outcast by people at school and made to feel out of place everywhere I went. I spent a lot of time in the woods though, when I would skip college, I wrote a lot of my songs out walking in the countryside so I’ll give it that. I was definitely inspired by the outdoors and the places out of the way from people in Barnsley.

S] What ideas and experiences inspired ‘One Eyed Girl’?

One Eyed Girl is a sad song to me. I wrote it for a girl I once knew at school, the one everyone bullied and called a slut. It was awful because the things she would tell everyone were terrible, hinting to sexual abuse and everything and everyone some how turned it around that she was a slut. That she was ‘asking for it’. Boys would use her all the time and laugh because she was the ugliest girl in school and nobody said anything, they were just glad they weren’t her. I was thinking about her five years later and decided to write her this song, illustrating in the song and the music video that she felt like a circus freak. She’ll probably never hear the song but I don’t care, probably better she doesn’t. I just had to get it out there y’know, I felt her rage.

My mission with this band is to unite all the bedroom girls and boys. The ones just like me that hide away and make their art behind closed walls. The ones that need to escape but don’t know how. I wanna show them that they can escape and that they can be someone in a world that makes them feel so outcast. My biggest dream is to sell many records and pack out many venues and hear that I’ve inspired people just like me to plan their own world domination with their art. I want to see them all screaming at the front singing every word, and my mission is to make them believe in themselves.

S] What’s been a career defining moment for you, as a band?

Probably when we got off stage after playing the Isle Of Wight festival this year. Sam (drummer) looked at me and said “Oh my god we just played Isle Of Wight, just let that sink in”. And sometimes you forget to let it sink in, when you work so hard and you get to where you’ve been aiming for, you get so caught up in the moment you forget to think of how amazing it truly is. We all had a huge band hug and it just hit me then how lucky I was, I had a solid team, we had just recorded our first album, we just played a huge festival and I just felt this huge rush of excitement thinking of where we would go next.

The most exposure we got was from our music videos and social media online. I’d worked up a following doing covers online for five years or so beforehand so when we launched the band we already had a load of people supporting us right at the start to help push the music.

We got some colourful videos out there and from then my mum contacted lists and lists of venues in the UK asking if they’d have us. People instantly caught on and we played a load of free shows. We contacted smaller local radios and bloggers with our tracks at the start, as we didn’t want to waste all our ammo on the big boys just yet. Social media has been the best thing, and I would tell everyone who’s starting a band to make a conscious effort to give lots of attention and love to the ones that supported them from the start.

It takes a hell-load of work to get on the big radio stations and to play packed out shows but the ground work is most important. Building up youre following gradually and organically has been the best way for us, we play shows and we know everyone there, it’s an amazing feeling.