After a five-year hiatus, Hijak Oscar are back and will be performing again with a new line-up. Vocalist Tim Fox spoke to Soundsphere about starting the band again and what’s different this time. 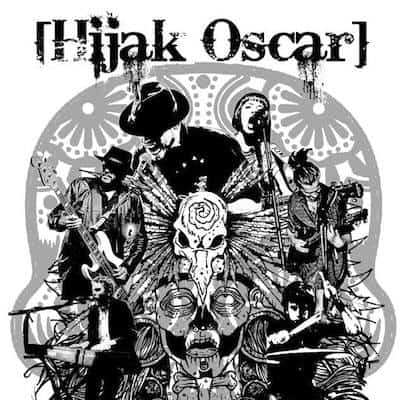 S] Why are you doing it now and what made you decide to do it all again?

T] “Well it was put to rest for quite a while but not really rest, it was just in a deep slumber. Met up with some new guitarists, they came and did a gig with us, and basically it just felt very fresh and like we got a bit of exciting guitar back in there. I felt we could write more material.”

S] Tell me about how it is working with new guys, and building new material.

T] “The main guy that we’re working with is Joel [Whitaker] from Asio’s [Eyes]. I’ve been playing and jamming around with Joel for about a good year-and-a-half now and it’s been quite a nice playing relationship. We started writing stuff for my solo project as well. It can all transfer to the other sections of Hijak on full band scale. But it’s real fun. It’s just nice again. There’s no stress. We’ve got Alice Ostjapuk is amazing as a singer. Then we’ve got Stuart Fletcher [We Could Be Astronauts], who’s just a winner. He’s  a very positive element to the band. We’re really sad that I couldn’t get some of the older members but we’re really excited about this new line up and, to be honest, we feel like we can push it a bit forward now.”

S] How have you changed since that time in Hijak?

T] “I got married and divorced, went mental, had another relationship, went mental again and then decided to just knuckle down. Changed as a person? Well, everybody changes. I’ve changed about a million times in my life. I think everybody’s a bit more mature, we don’t lose our rag as easily, everybody’s looking out for each other. It’s been quite good like that.”

Q. How do you look back on the success you had in Hijak?

T] “It was ups and downs, record industry has changed massively, it’s not about making a lot of money. Anybody in a band that says that’s what it’s about, it ain’t about that anymore. I’m not really bothered about making money, I just want to go and play some music with some good musicians. And I’ve got some nice people and their ethos is really good. If all that stuff comes along with it, that’s just a bonus but you don’t need to taint it with that. Just go and play for the love.”

S] How are you planning to release stuff?

T] “We’ve got all our profiles on iTunes and stuff like that, probably utilising a couple more like Bandcamp with the new album because they’re really good anyway. Hopefully, by March we’ll start recording, have it all ready for going into the summer ready for festivals and stuff. It’s just one of those progressive things. We’re just taking it easy and chilling. We’re not rushing around like we used to. There’s no point rushing around, people get upset and then the lovely reality of what Hijak could be is torn apart.”

Q. Do you look back on any particular tracks as favourites of yours? Things that you will always enjoy playing live or have particular meaning to you?

T] “A lot of Hijak stuff is, because it’s all written that way. At the moment I’m really enjoying listening back on ‘BlackSheepMoneyBox’. There’s a couple of really nice core pop tunes on there, a bit different to your normal pop tunes. There’s ‘Reunion Ball’, ‘Last Chance Saloon’ and we did a nice diverse roll from heavy to lo-fi. But I’d say at the moment it probably is ‘Last Chance Saloon’ because it was the most underplayed song we did live.

S] What’s your opinion on the York music scene and how it’s changed?

T] “It’s always got more positive. York’s always been amazing. The only thing is it’s just about utilising people, not getting precious and people collaborating with each other like everybody has been doing for the past five years. So there’s a lot more collaboration, for instance I’m going to go and do a gig with La Petite Mort somewhere next week. They want to go and put a ramshackle gig together so we’re going to do that. I go and help G.T. from Boss Caine a lot as well. It’s just really nice working with a really diverse group of people, it makes you play differently, makes you think about music differently and you just learn off each other. We’re just at that point now, which I really believe, there’s something about this year that’s got a bit of a nice edgy feeling about it, I feel like York might get a bit more spotlight, which it deserves. We all believe that it should do because we’ve got music from every genre at the top of its fucking class.”

T] “My inspiration comes from interactions with other human beings and just basically engaging within subjects which matter beyond our individualism. We have to think about bigger pictures and things. I like being engaged in those conversations because they get you thinking, they get you also changing perspective if someone has a different argument. Just being around a changing atmosphere is really inspiring anyway and York constantly changes even though you don’t feel it sometimes. Each time you walk round a corner something else is there, something else is happening.”

S] What’s been the highest and lowest points of your career so far?

T] “For two years I didn’t really do any music, I just went and listened to everybody in York, and didn’t play anything. I just felt like I would sit back and listen to what everyone else is up to. One of the highlights, it wasn’t actually writing or anything like this, it was just like falling in love with the city again that I fell out of love with over a period of time. My pinnacle was basically when I suddenly decided, ‘I’m going to go out tonight’ and then everywhere I went there was a musical-orientated night with friends there and a really nice, supporting network of people. Lowest point, well, my life’s a bit like a roller coaster, there’s going to be low points along the way but I just predict them now. It’s like a weird sort of paranoia but I laugh at it now. I’ll look at it like this, ‘so many good things are happening so far and what’s going to happen next?’, and it’s sort of like ‘oh try and be optimistic’ but you start laughing at yourself when you’re saying it.”

S] What about this new material, are there any songs you are working on?

T] “There are several titles coming up at the moment, one is ‘Dying Breed’, which is one of my solo tracks on my Soundcloud. Took it to band practice, everybody sounds amazing, we’re just working through the dynamics of it and getting it ready. I’ve got loads backed up, stacked up ready, so it’s all going to be a themed sort of scenario. For the actual gig, hopefully it’s going to be here in time, we’re releasing a limited edition album, collection of Hijak albums and a demo disc. That’s going to be on sale for raising a bit of money but the gig is, what I’ve decided literally like I said about no money, we’re going to do events that promote charities. We’re just trying to do a bit more work, leave it in the ethos of Hijak. It’s not about taking money, it’s about fucking being on it.”

S] What are the aims for the future of Hijak now?

T] “It’s more like using it as a format to help carry other things. We’re trying to get a collaboration of some people together at the moment. We’re taking on the festival dates as they come, hopefully going to do a music video, never got to do a music video properly with Hijak. I think I’ve turned into a more of a Dickensian looking sort of weird, arch-nose, person now. So it’s just basic sort of stuff like that. Could you imagine like, say a 25-piece band from York on all the festival stages in a main slot? We’d rock that shit man! We’ve got all the sections covered!”

S] Have you got a message for everybody that has supported you guys over the years and people that are going to come to the show that haven’t heard Hijak?

T] “We play out of our skin, I usually lose my voice and become obnoxious, I will be wearing half drag on the evening. You’re going to have to come and see the Fox in drag.”