We’ve got some cool history with Hope&Social, when I first started out I worked with ’em when they were a band called Four Day Hombre. Always exceptional, and really hard working, I’ve always been heavily motivated by their output (and input)! It’s been a long time coming, but here’s our catch up with the lads! 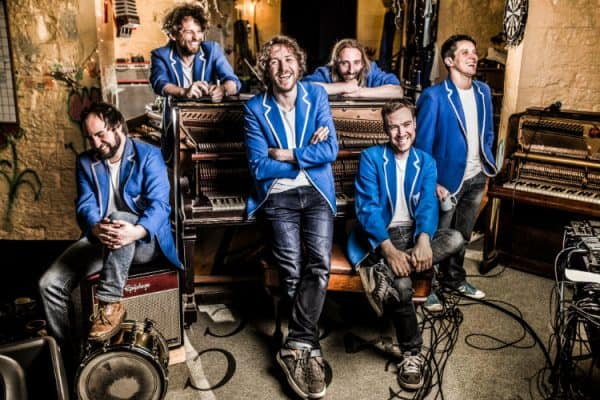 S] How have you remained motivated to create through the years?

Simon Wainwright] Well, there a number of factors. Being creative is its own reward in many senses. If you’re lucky enough that your work continues to challenge you, then that’s an amazing way to live your life. So, we do all the stuff that bands do, but more. We’ve made this album in a way that has challenged us, work on projects that other bands just don’t, we create unique experiences, we’re releasing the album as nine videos. We so try to be a bit more interesting than simply “band puts record out” y’know?

Rich Huxley] The ongoing challenges are the fun of it all really. Standing still would mean stagnation for us. We’re only *really* interested in doing things that feel impossible, that’s the lifeblood of our work really. Plus, it’s our job, so y’know mortgages and food on the table and all that [grins].

S] How do you look back on the Four Day Hombre days now?

RH] With the greatest affection. We got to do some amazing things. Created the world’s first [we think] Fan-Funded Record Label. BBC Radio 1/2/6 live performances. Leeds/Reading Festival. Licencing the album to a Canadian label and touring Ontario for a month. Gigging and making an album in New York. LA. San Francisco. Germany. It was an amazing time, but entirely unsustainable.

Ed Waring] We learned a lot during the recording of our first album with (Grammy Award Winning record producer) David Odlum. As tumultuous as some of those times were, we learned a hell of a lot through our experiences.

SW] And with reverence to the people who enabled that. Our shareholders. Their leap of faith, at least in part, enabled us to be the band we are today.

EW] We bought Rich a new ukulele for his birthday last year, and that riff at the start is something that he was playing a lot.

SW] Yeah, we’re sooooo glad we bought it for you. [laughs] On the whole of (Hope and Social’s forthcoming album) ‘Feel’, we’ve written and recorded in a very different way than we have previously. The process has been, by definition, a lot more abstract. Add. Take away. Get into the minutiae. Add. Stand back, take in the whole. Take away some more.

RH] We’ve been much more vicious with the digital scissors than we have before. Sonically, ‘Sunrise Laughing’ feels very up. That’s ukuleles for you I guess. But also, there’s a throw away quality to the pizzicato strings, and there are synths, 60’s Dick Dale and wall-of-sound influences, a concert xylophone, and shit brass band… and a better one.

SW] Lyrically, Sunrise Laughing has a lot to do with the parental joy of seeing the world through a child’s eyes for the second time in your life. That, and death… and the oncoming apocalypse… and trying to just forget all that for a minute and be able to live in the moment.

S] You guys can play anywhere, and at any time it seems – how important is live performance to the band, and being able to perform in such a wide variety of ways?

RH] It’s one of the biggest personal pay-offs for me. I love doing shows. That’s the point where you really get to see if the art you make connects with people. Plus, we get to meet people. And people are good.

SW] This past couple of years, we’ve been able to see, meet and work with such a diverse variety of musicians and artists. We’re always looking to find new and interesting ways of connecting with people. Sometimes that’s through our “make a record and a music video in a day” project Crypt Covers, or simply taking inspiration from amazing bands and other art forms. At Durham Brass Festival this year, we were totally blown away by Funky Style Brass. They do that brass street-band thing, but playing crazy electro-brass euro-dance stuff – one dressed as a chicken. It makes no sense, but it’s amazing.

EW] So now, we’re learning how to be a street band!

S] What advice would you give to new and emerging bands on how to succeed?

RH] Work out what success means for you individually, and as a group. Really think about what it is you want to do, because the route to a sustainable music career with total creative freedom is a very different to the one you’d take if you want to be a pop star.

EW] Make awesome work, and let people have it. When you make awesome stuff, people will literally queue up to give you money. They will want to talk to you, take your photo, make your video, buy your record, tell their friends, bake you some cake, buy you drinks, make gifts, offer support, come to gigs, and applaud. There is nothing that will help you more, than being awesome.

SW] Be prolific. The more you do a thing, the better you get at it. So write, gig, record, release, tour, write, release, tour. Work hard. And be nice.

S] What is your definition of success?

EW] A life in music, in art is an amazing thing to be able to live. The experiences we get to have. The places we’re able to go to, the people we get to meet and work with, they’re rewards in themselves.

RH] Being able to make the art you want to make and it be part of your living. That’s important. That and coppering up at the end of the month and finding that the bills are paid, all the nappies are bought, and that there’s money down the back of the sofa for a nice craft beer…or eight.

SW] I’ll let you know if we ever achieve it. [laughs]

S] What has been a career highlight for you?

RH] Opening the Tour de France: Grand Depart at Leeds Arena was just incredible. Us lot, plus an extended band of 180 on stage, playing to 10,000 people in the room, and on TV. Getting to make a hundred and odd people’s “OMG. Best. Day. Ever.” that was a pretty awesome day.

EW] It’s a toughie to whittle it down. There’s been so many. Maybe our second show at Glastonbury, the one where we gave out two and a half thousand kazoos to the audience and they became our brass section.

SW] Or the moment when, during recording the last song on our album, ‘April’, where James realised that teaching 70 people how to play wine bottles might actually work. They’re all part of what we are as a band. Big, small, grand, boutique.

S] How has the mission statement of the band changed over the years?

RH] When we started we had a two-point business plan. We’re only going to do things that are fun, and “no more love songs”.

SW] We may have reneged on the latter in recent years, but the first bit’s just as important.

EW] At the end of the day, we’re just people who like a damn good time, making music, a show that’s got a bit of theatre to it and a drink afterward.

RH] Hope&Social, “dressing up and showing off in front of people since 2008”.