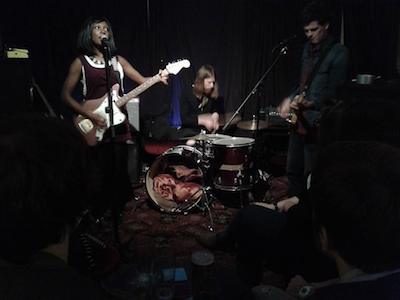 S] How did you guys form?

Sam] “It was organic. Myself and Danny played in Missing Kids, and The Federals before that. Estella is my girlfriend! One day, I asked Estella if she wanted to form a band, and I was actually thinking that she wouldn’t say yes!”

Estella] “I thought it was a joke! Within like a week, we had a slot as support for Missing Kids, and so it was like, ‘Oh, we should probably write some songs’. So, we wrote some songs at the weekend, then we had the practice and the gig.”

Sam] We wrote three songs, and when we played the first gig, people didn’t hate it, and so we carried on!”

S] How does it work for the song-writing process with you guys?

Danny] “Well, Estella and Sam write the songs, and then I’ll put some drums to it; they turn up with the track, and then I drum along – it’s really easy! The lyrics usually come afterwards.”

Estella] One of us will come up with an idea, and then we’ll take it to a practice, and then once the drums are added in, it’ll end up completely different. I really like that.”

Sam] “We have a slow song that we haven’t named yet, and that was originally supposed to be acoustic, but when Danny put the drums to it, and it’s taken a completely different form.”

Estella] “Yeah, a lot of people have said it has a sort of Mouldy Peaches-vibe now, and I think it’s really cool how it’s just worked.”

S] What do you think of the music scene currently?

Danny] “Bull are really great. We really like Dead Bird, as well and Muttley Crew.”

Sam] “Yeah, I think the music scene is really healthy at the minute, …And The Hangnails are another band that are doing really well, alongside Fawn Spots – they did Live At Leeds as well as YO1 this year.”

Estella] “I feel like the York scene is really supportive as well. To say that we only started in October [2013], and we’ve had quite a few bands approach us to support them. I haven’t really played in that many bands, but I’ve had no negative experiences so far! People are always saying how they just want it to keep growing!”

S] Are types of bands are inspiring you at the moment?

Estella] “I don’t like anything too serious. I really like Upset at the moment; they’re really cool. Their drummer used to be in Hole. It’s really chilled out stuff – there’s a Best Coast-vibe to it. I also really love Screaming Females; seeing the singer [Marissa Paternoster] rock out is really cool. I love her lead parts and stuff. So yeah, we don’t write any songs that are too serious. Nothing too long either; JUNK. don’t do long songs. It sounds strange, but the songs just turn out that way.”

S] What are the plans for your future?

Danny] “We’re putting an EP out this year with CHUD Records from Leeds – it’ll be a cassette, and then we’ll be touring to support that – that’ll be in June or July. We recorded that in Bar Lane Studios with Dom Berry who runs Sea Records.”