Keroscene could not be more DIY if they tried. With guitarist and vocalist David Troster, guitarist and keyboardist Francesco Bondi and drummer Jake Sorbie having risen from the ashes of the band Binary, they’ve completely taken control of all angles with this project – from music to live promotion. Recently they dropped their first track, ‘Cotton Candy’. They have even turned a warehouse into a club venue. David and Jake get talking to us about the evolution of Keroscene, their upcoming album and Unit-4. 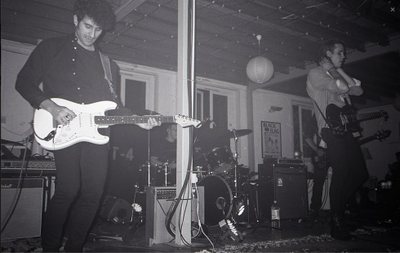 S] How did Keroscene come to be?

D] “We formed earlier this year. We all got together to make a record. We moved to Willesden and were living in an old run down building that used to be part of Morgan Studios in the 80s. As we wrote and developed the album, our identity as a band became clear to us.”

J] “We just wanted to fall in love with writing new music and not lose focus with what it is to be a band. Hanging out, playing shows, enjoying it.”

S] How has the dynamic changed between you guys over time?

D] “Playing in our previous band was a big learning experience for us. Feeling each other out as musicians, figuring out what it is that we wanted to do musically. Above all, there was this tremendous artificial pressure that we all felt, to the point where it wasn’t enjoyable. So when we kind of came together as Keroscene it was a very earnest, ‘let’s just make some music’.”

S] How do you feel you have changed during this process of building this new record under this new identity?

D] “The biggest change that I can see is we have a stronger DIY ethos, not in the sense that we want to be this sort of punk band but in the sense that the people involved with the band are a very tight knit group. Everything from the artwork to the music to the videos to the live shows.”

D] “We’re going to put out our debut 7″ vinyl in late January. It’s a double A-side with ‘Cotton Candy’ and another track ‘Storm O.K.’ Post that, our main focus is building up our club night in London at our warehouse, which is called Unit-4. We host those once a month, although we’re going to up those to twice a month in the coming year. We invite a bunch of different bands down and create a fun place to have shows and party. The vibe to this point has been very positive. People come chill out and listen to new music.”

S] So this is very much about you guys turning it around and doing it yourselves?

D] “Yeah, I think it was definitely something we felt very strongly about. I think that concept of self-sufficiency is really important for a band because it forces you to become a better artist. You have total control over everything and that’s both liberating and very intense. If we put out a bad track or play a bad show, that’s on us. It just makes us work so much harder and what’s great is the pick up from people. It wouldn’t be possible without that.”

S] Will you be touring up and down the country or is that something you have got to wait for?

D] “We definitely want to tour. I think right now because Unit-4 is just such a full-time thing, promoting the night, getting bands to come, we’re definitely tied to that right now. Obviously we’re going to come play for you guys in February. I think for us it’s all about playing the right show. Every show is kind of like an extension of us.”

J] “So often it happens with bands, you travel hundreds of miles across the country to a night which is badly promoted, it doesn’t suit each band and then you feel like you have wasted your time. Whereas, for the right show, we definitely want to tour and move around. We can build something here and then in the meantime if anything else comes across that is right for us then we would absolutely love to. With what we’re doing, we put a lot of effort into promoting it, building it up and getting it more exciting. We do our own posters, everything and any bands that come, you’re almost guaranteed to play to at least 80 to 100 people. So those nights are a lot more exciting and worthwhile. Bring a crowd that want to hear that type of music, that want to come to that kind of alternative night.”

S] Can you come up with a Frankenstein’s monster for the Keroscene sound?

D] “The heart of Fugazi, the head of Brian Eno, the arms of Queen and the legs of Queens Of The Stone Age.”

S] Is there a track that you feel perfectly defines where you are now?

D] “I think the album as a whole defines us better as a band than any track in particular.”

J] “You couldn’t pin it down to one track necessarily on the album.”

D] “At the same time there’s a spread. It’s not a mixed, confused bag. There’s consistency in it, it’s just that the components are very eclectic. We spent a long time sequencing it because that was a big deal for us. I wanted it to be an album that people could just put on and from start to finish it just flows.”

S] Were you going for a soundtrack?

D] “The record is a concept record. It tells a story starting from a very introverted perspective. Everything that takes place is in the listener’s mind and then as the album progresses the lyrical matter starts to talk about things outside of oneself, like relationships with other people. It’s a transition from the internal to the external. So by the end of the record it opens up and gets really full on sonically.”

J] “It’s the type of record that I’d probably listen to on headphones or really big speakers, just tune out and get lost in it.”