In our latest band spotlight, we talk to Michael Storey of York alternative metallers KNIGHTS, who happen to be looking for some band members! 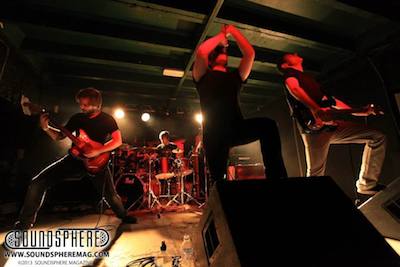 S] To what extent do your surroundings – location, and specific spaces and places – inspire the work on ‘Hailstorm’?

M] “I don’t think the location has had any influence with the work on this.Arguably things that have gone on within places and spaces could be said to have accounted for this and this is everything from hospitals, gig venues, and a number of other places really. But It’s more a series of of events that had taken place including the death of family members, being irked by mindless hate flowing through the music scene in relation to how people condone themselves at shows and a whole tirade of sh** that’s wound us up – Hailstorm is kinda the therapy, or the hulk moment if you will, almost like the final straw.”

M] “The EP was entitled Hailstorm because it was almost like a barrage of hard, cold events after we released Fables, an 8-track LP, that had really hit us hard. We tried to capture this in one word and Hailstorm seemed an apt fit. ‘Rise’ is a pretty huge tune.”

S] Talk us through what inspired that one?

M] “The wild-west intro was an idea from our previous bass player, James, who wanted the EP to be more than just guitars, drums, bass and vocals. We’d seen what bands like letlive. had done with additional percussive elements within their last two albums and it’s something we wanted to bring into our sound. After that brief period, we’re talking influence from bands like The Chariot and Rise And Fall (Belgium) who both embrace a really aggressive and chaotic approach, which oddly enough is really well-controlled – This really provides the angst and the venom in the tracks. We kept the structures for our songs relatively simple so it was an easier listen and more memorable than songs we’d previously written and recorded. And if you take what we’d talked about earlier in the interview, this really is a good way of shaping exactly what we wanted Rise and the other respective numbers on Hailstorm to sound like.”

S] Why are you on hiatus as quoted on your FB?

M] “Unfortunately our bassist and vocalist have parted ways with us. There’s no bad blood between us, they just simply decided that it wasn’t for them anymore. It was great to have worked with them and we wish them well for any future musical endeavours that they’re may be involved in. But for now we’re only half a band and are looking for a vocalist and a bass player, so if you like what you hear, have gear and want to play for us then let us know. We’re not calling it a day, the drummer and I want to continue and whilst we realise this is difficult without two key members, we don’t want to give up on what we’ve created here.”

S] Outside of music, what keeps the band passionate?

M] “Just working hard, family, and the drive to do well in everything we do in our day-to-day lives. Music though, does play a big part in the passion that we have for doing what we do, because it inspires us. You see bands in live settings or on YouTube at various festivals and you think ‘hell, I’d like to be in that position one day’. We realise that you can make whatever music you want but you can’t expect to be famous – but the bottom line is we just like writing heavy music and knowing that there’s the odd person here or there into it helps drive that, as I’m speaking we’ve just sold an EP to a guy from Durban, South Africa. That’s a good incentive to keep things going, right?”